The Double Life of Alfred Buber 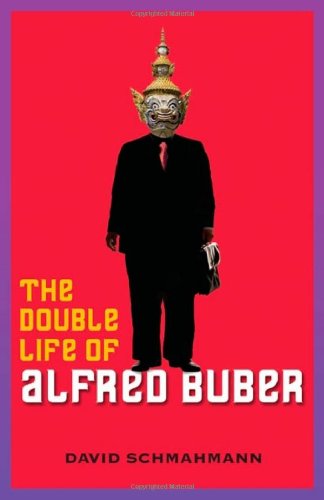 “. . . a truly remarkable literary creation. . . . There’s a balance, a way of seeing and then expressing on the page, that sets Mr. Schmahmann’s work apart from what so many others have attempted and failed to accomplish—and what he manages to do with paper and ink. He rubs words together like sticks, as if to set things ablaze.”

There will be those who, when discussing The Double Life of Alfred Buber, will conjure the name of Humbert Humbert, Nabokov’s voluble child molester, and yet, it seems only fitting that another Double-H—Shaw’s Henry Higgins—gets called up as well, because Alfred Buber, the quasi-protagonist of David Schmahmann’s lightly wound new novel, owes something to both.

Technically, you see, Buber abuses no one, only takes advantage of a form of debasement that already exists. No, more like Higgins, he elevates—at least to his own thinking—rather than violates. And then, having elevated, he is left wondering what to do next, and whether or not he will lose his self-molded beloved to that younger, more hot-blooded guy named Freddy (or Clare Quilty, for those still clinging to their Nabokov).

In The Double Life of Alfred Buber, author Schmahmann leaves us wondering about this and much more as he presents the ebb and flow of Buber’s somewhat grandiloquent life through the ruefully strange filter of his protagonist’s own viewpoint. To wit, we are given fair warning of what is to come in the book’s very first line:

“These are the chronicles of the starship Buber, noted bibliophile, late night television addict, keeper of sordid little secrets so appalling he dares not breathe a word of them to a soul.”

Ah, a mock memoir with pop cultural references for the literary elite—not a common frolic, to be sure, but one that, when it presents itself, proves most satisfying reading.

But note that the stressed words of the somewhat generic book title must be Double and Life if we are to understand what we are up against. Because this is a book that reminds us in the reading of it that the root form of the word “duplicity” is “two layered.”

Thus we have a work that is, in turns, both comic and tragic—the story of a man whose two-layered life (he is at once a staid lawyer and a sexual voyager), whose tale is told from memory in fits and spurts (forgive the sexual imagery—the book seems to yank it to the fore) brings about the twists and turns of the plot, as we, the readers, struggle to reason through what is and is not real. And what the ramifications are of a life that allows itself to inhabit those things that are, by nature, in opposition to each other.

Central to the plot is the character of Nok, Buber’s own Lolita/Eliza, whom he comes upon in a bar in South Asia:

“Would you like to know how I met Nok?

“(You will say: How can you tell this to me, to me of all persons, how can you? And the answer: I do not know.)

“She is on the floor, on her knees, between my legs. Someone has handed her a little basket. In it are tissues, a bottle of mouthwash, a bottle of Johnson’s baby oil. The basket has a picture of a cat taped to the side. What she is doing feels good. Although there are others in the room, two Australian men being hustled to my left, other girls, no one pays too close attention.

“I am not shamed, not embarrassed, intrigued rather, quite overcome with the newness and the daring. I lean back and wonder at this, at the girl between my legs. I feel a little sorry for her as she turns to the side to exchange a comment with a friend, gets back to work, does not appear at all touched by shame or particularly in need of privacy for what everything else in my life has told me is a private act. I am not happy to be mastering her in this way, to have her bowed before me, but there is something brutally honest in it too, something terribly naked in the exchange. Buber is not for these moments a chaste cipher, untouched, untouchable, in the shadows.”

There’s a balance, a way of seeing and then expressing on the page, that sets Mr. Schmahmann’s work apart from what so many others have attempted and failed to accomplish—and what he manages to do with paper and ink. He rubs words together like sticks, as if to set things ablaze.

Throughout the book, as here, the author manages to balance his narrative for his reader on the head of a pin, to allow us to experience multiple emotions at once, or in rapid succession: The sad life of the girl on her knees. The deeply meaningful detail of the cat sticker on the side of the basket. Buber’s experience; the girl’s seeming lack of same. The question of whether such an exchange can be nearly as honest as it is brutal.

From Nok’s point of view, we can never be sure. It is she who, in this text, is truly a “chaste cipher.” We see her, though, only through Buber’s eyes—and even then only as if through walls of dry-ice fogginess, to the sound of cherub’s song:

“. . . I have stepped off the track of my life by something irresistible but taking the shape of a girl.

“There is, in her face, in her eyes, every dream I have ever had.

“Oh, it is not love. I know that. It is much more compelling. I do not know where it will lead and yet, and yet, it will lead where it leads. I am a man. She is a woman. Someday we will both be dead.”

It may be meaningful that, in Thai legends, the nok is a giant bird that flies through the Himapan Forest, and that thunderstorms are said to be the nok’s idea of a prank. It may be meaningful that, although Nok shows no signs of discontent with her life in the Star of Love Bar where she plies her trade, she spends her time between clients learning English from a book a friend gave her. (Buber decides she needs a better book and goes in search of a bookstore: “I don’t know what I am looking for. ESL: Elementary Job Interview Skills. Now that skills would those be fore this time and place? I have a plane to catch, a taxi ordered, a blowjob girl waiting for upliftment. I made my selection and walk back briskly.”)

It most certainly is meaningful that, in spite of the lack of physical description given her by her author, and the very few words that she speaks in a novel that echoes down the hallways with words, words, words that are all Buber’s that Nok is and remains the truly indelible character—tragic to Buber’s comic, fixed to his manic ricochet of a thing—a truly remarkable literary creation.

As to where things go from there, from the Star of Love Bar: as Buber says, “It will lead where it leads.” To success and failure, to scandal and hope. To as satisfying a conclusion as can be in such cases of duplicity.

Note that there’s a certain jazz-handedness to the first few pages, in which an artificiality both of language and emotion makes things initially slow going, but hold on, better things are ahead. Once it begins in earnest, The Double Life of Alfred Buber seems entirely fresh, set as it is in the mirror-maze of self-perception.

And, as in such mazes, some mirrors show reflections that are short and fat, others tall and rickety, as the viewer hurries from mirror to mirror, seeking the one that will reflect himself back to his own eyes—to the self he believes he truly is.