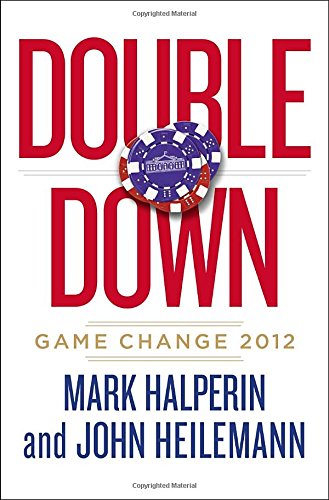 “. . . if you read this book, you’ll find yourself hungering not just for the midterm elections but for an early start to 2016.”

One of Alfred Hitchcock’s last movies was called Family Plot. Spoiler alert: The “murderer” actually turned out to be the entire family, except of course for the decedent.

Family Plot comes to mind while reading Double Down: Game Change 2012, a richly compelling and meticulously researched account of the 2012 presidential campaign offering all the twists and turns, characterizations, brilliant dialogue, and reversals of fortune of a Hitchcock thriller.

It’s hard to believe that anything thrilling could be written about as soporific a topic as a race between Mitt Romney and Barack Obama. So here’s a second spoiler alert: Obama wins. Okay, you knew that. But what you don’t know are the myriad details, back stabbings, backroom deals, and expletives undeleted strewn across the path to the presidency 2012.

Sometimes one has the feeling that Edward Snowden or perhaps even Julian Assange ought to receive coauthor credit, because it seems as though the authors had unfettered access to the phone calls, email, texts, and even pillow talk of everyone who had anything to do with politics in that fitful, fateful year. Instead, the authors reveal at the end of the book that they conducted more than 500 interviews with more than 400 participants in the race and from those conversations were able to put together a narrative that was far more exciting and compelling than the race itself.

Sometimes the book merely gives evidence to something that we already knew: Mitt Romney was way over his Olympic skis as a presidential candidate, tin-eared, tone deaf, and except for a few brief shining moments during and after the first presidential debate, utterly unfit to run or serve.

The president comes across as optimistic—despite everything he has seen, heard, and done—to the point where he is almost willing to fail at debating rather than compromise his standards. He has no regard whatsoever for Romney and takes great pleasure in beating the pants off the guy. But what’s even more interesting is Obama’s absolute mystification over his intelligent, well-financed rivals’ seemingly endless series of missteps on the campaign trail.

Of particular interest to the president and the book’s authors is Romney’s characterization of 47 percent of the American electorate as, essentially, malingerers, takers, and tax cheats who have a hand out but will never put that hand on the lever to vote for Mitt. Obama is no stranger to such behind-closed-doors verbal gaffs, having said something equally self-defeating about bitterness, religion, and guns in a donor confab during 2008. But the book could be summed up in a single question: How could someone as smart as Mitt Romney be so dumb? Not even 500 interviews with 400 politicos can answer that question.

Along the way the reader is treated to delightfully gossipy portraits of Republican leaders including Chris Christie, known as Big Boy to the Romney team, and his gargantuan appetite for food, ego massaging, grandeur, and most likely hidden scandal. Christie comes across less as vice presidential timbre and more like a Sopranos character in the book, which will certainly not help his cause should he choose to run for president in 2016.

The authors also present a fascinating portrait of Bill Clinton, a lion in winter, getting his chops back after years away from the campaign trail. The touchiness between him and Obama eventually dissolves into a love fest of politics for politics’ sake and the always delightful task of beating Republicans.

And then you’ve got the story of two individuals who seemingly only open their mouths to change feet—crazy “Uncle Joe” Biden, whom Obama learns to love the way sitcom neighbors find affection from the main characters of the show; and the cameo appearance by Clint Eastwood, whose befuddled, unscripted, and not altogether intelligible star turn at the Republican National Convention summed up all that was wrong with the Romney campaign in 2012.

If you’re one of the many people who found our most recent presidential election as boring as a railroad timetable, to borrow Edmund Wilson’s felicitous phrase, you’re not alone. But if you read this book, you’ll find yourself hungering not just for the midterm elections but for an early start to 2016.