Dostoevsky in Love: An Intimate Life 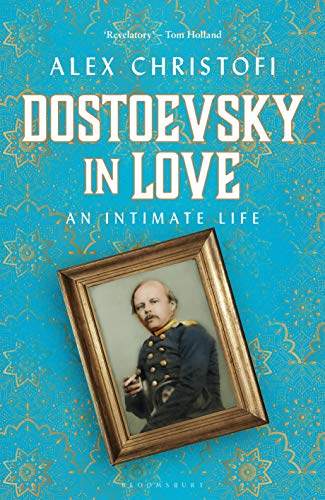 Of all the great writers of 19th century Russian Literature, or for that matter, all of the great writers in World Literature in any century, not many surpasses Fyodor Dostoevsky. He published twelve novels, four novellas, sixteen short stories, diary entries, and other essays in newspapers and magazines. In addition, collections of his notebooks and correspondence have been published since his death.

Of course, greatness is not measured in quantity, but in quality. Dostoevsky offers insight into the human condition as he exposes the intellectual and emotional world of his contemporaries in both material and spiritual terms. The depth of his understanding and his ability to convey that depth in the written word is the essence of his greatness.

For any writer to take on the task of displaying the full range of Dostoevsky’s life and talent is a formidable challenge, and to accomplish this in the form chosen by Alex Christofi only adds to that challenge. There are three elements to Christofi’s narrative: there is the standard third-person narrative; there are direct quotes from Dostoevsky; and there is an interesting third element set off in italics. This element is a creation of Alex Christofi and is written in the first person. It is drawn or extrapolated from Dostoevsky’s letters, notebooks, journalism, and fiction, as well as the observations of members of Dostoevsky’s personal and literary circle.

On first reading, this approach is disconcerting as the narrative jumps from first to third person, but once the style becomes familiar, the narrative flows more smoothly.

Dostoevsky was a gambling addict, an epileptic, a father, a husband, and, in turn, an enemy of the state and a welcome and frequent guest of the tsar. As a young man, he was an engineer, a soldier, a poet; he faced a firing squad—coming within minutes of execution—and he served several years in a labor camp.

He had a turbulent love life. He married twice and had four children from his second marriage to Anna Snitkina. The two met when Anna worked as his stenographer as Dostoevsky scrambled to write The Gambler, start to finish in two months. He also loved Polina, the third woman in his life, who was a student when they began their complicated and complex relationship.

Dostoevsky burst onto the Russian literary scene in 1846 to great praise with the publication of Poor Folk. In a matter of weeks, he dramatically fell out of favor upon the publication of The Double. In the longer run, following his prison term and exile, Dostoevsky’s reputation grew, and, by the time of his epic novels, he was recognized as the greatest writer in Russia, a position, some thought, he shared with Leo Tolstoy. Crime and Punishment (1866), The Idiot (1868), The Possessed (1871–72) and The Brothers Karamazov (1879–80) were all published serially in The Russian Herald and are considered his greatest novels.

Alex Christofi pieces together all of these elements of Dostoevsky’s dramatic life with great skill and clarity. Christofi weaves together Dostoevsky’s literary achievements and the overwhelming aspects of his personal life and offers analyses of some of the most famous passages in the novels.

Dostoevsky emerges from these pages as a complex and eccentric human being. He was a man of great intellect, powerful emotions, and considerable insecurity. Layered over these traits is his great skill as a writer and as an intellectual who had the ability to delve into the depths of human existence in search of meaning and spiritual enlightenment.

Dostoevsky could be irritating and exasperating when dealing with others, and his gambling was self-destructive. Two of the most moving sections of Dostoevsky in Love are the accounts of the deaths of two of his children: the first, his three-month-old daughter; and the second, that of his three-year-old son who died in the aftermath of an epileptic episode.

This is not a traditional biography, and there is much more that has been written elsewhere. What Cristofi attempts to do is reveal Fydor Dostoevsky the man with all of his charms and weaknesses along with the power of his ideas. In this, Christofi largely succeeds by producing a serious book about a serious man who is brilliant and charming and, at times, an irritating human being.

If you have immersed yourself in Dostoevsky’s work, you will enjoy working your way back through it as presented and analyzed by Christofi, and it will likely lead you back to read it again. If you have read only smaller portions of Dostoevsky, Christofi’s account will send you off to look for more. And, if you have never read this giant of Russian and World Literature, Dostoevsky in Love will send you off to start a great literary experience with a master of the written word.