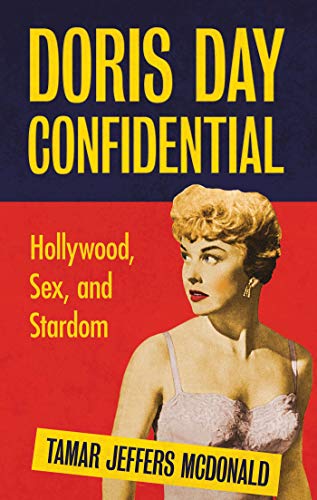 “Doris Day Confidential is a thoughtful and thought-provoking work.”

In the acknowledgements section for her new book Doris Day Confidential: Hollywood, Sex and Stardom, author Tamar Jeffers McDonald writes, “Over the past 22 years . . . I have been thinking, writing, and arguing about Doris Day.”

That's a whole lot of Doris.

In her introduction, the author completes her thoughts about the actress/singer, and in doing so gives us a better indication of what to expect in Confidential:

“Even now, 40 years after Doris Day’s last film and 20 since her last regular television appearances, the star’s name retains currency: she is often invoked as shorthand for a kind of outmoded sexuality, with virginity firmly maintained until marriage. Although this assumption is widespread, close attention to the facts of Day’s own life challenges it, and the majority of her film roles also prove otherwise, with Day most frequently portraying a woman of maturely sexual desires. This book will investigate why the rigid view of Day’s maintained virginity should have arisen and become so indelibly fixed to the star, one of the most popular in American cinema during the 1950s and 1960s.”

This reveals the anomaly that is Doris Day Confidential: while its title suggests a tabloid biography—a work that investigates the loves, lies and scandals of the “true Hollywood story” underneath the flickering film façade—the reality is that Tamar Jeffers McDonald’s work is a more thoughtful approach, an investigation not only into screen iconography, but also the cultural and societal forces at work beneath Hollywood mythology, the forces that both control and shape it.

Thus this is likely the worst possible title for the work, one that suggests the polar opposite: a work as lurid as this one is actually thoughtful, investigative, probing. But the reader has only to consider the reality of the marketplace in order to understand the reason that things are titled as they are; Doris Day Confidential, fitting title or not, is one that might very likely sell some books.

The author deals directly with the issue of her title:

“Why is the book called Doris Day Confidential? I developed the title because it seemed to evoke the prurient promises nestling inside all the articles on the star, not just the ones in the particularly trashy scandal rags such as Confidential, Hush Hush, Whisper and Top Secret, but also in the middlebrow film fan magazine and the upmarket lifestyle and current affairs periodicals.”

Which is interesting in that the all-pervasive nature of the “myth of virginity” in the case of a woman who had been married three times and birthed a son covered the spectrum from the slickest of glossies, Life, Look and the like, to the worst of the tabloids, illustrating the power of the myth.

But also rather strange, as those who grab the book based on its title (and the secondary promise of the subtitle: Hollywood, Sex and Stardom—oh, the power of the promise of sex in the subtitle) are very likely to be rather put off by academic tone of the piece, and its reverential references to Foucault, et al.

Oh, forget that and move on. The title sucks, no matter how intentionally McDonald “developed” it. But the author here has done yeoman’s work; this is a book with a great deal to say. It is, however, a work of academe, make no mistake about it.

Confidential works best when it parses Day’s films. The investigation into print media’s partial invention of and adherence to the myth of Day’s virginal status (the adjective most often associated with her in the press was “fresh”) tires the reader in that it more or less grabs that virginity meme and strangles the life out of it.

Except for the wonderful, exotic and bizarre cover of the January, 1949, issue of Modern Television & Radio magazine, reproduced full-page here with a picture of a be-gowned Doris Day as the dancing nucleus to a mid-century representation of an atom, while the question of the moment dangles over her head: “Is Hollywood Doomed?”

Looking back and considering the extent of the warping and challenging of the American culture that Hollywood had to attain in order to survive, it might have been better in the long run if it had been. Or if the corpse had not managed again and again to reanimate itself.

The reader admittedly wishes that she would not fixate so on the harmless fluff that was Romance on the High Seas and that the insufferable Love Me or Leave Me would more or less simply disappear from our cultural consciousness (Doris Day as singer Ruth Etting? Only the “singer” part seems to apply—and even then, as singers, they were apples and oranges. And the pairing of Day with the wolverine that was James Cagney? Don’t get me started. . . .)

But when our author gets to discuss Pillow Talk and Lover Come Back, she hits her stride. Each is so iconic, so redolent of our cultural concept of naughty, so steeped in the Doris Day-ness of it all that the discussion of both (they come joined at the hip in the narrative) is that which we have been waiting for. And it is well worth the wait:

“It is difficult to over-state the importance of Pillow Talk in providing a much needed new impetus to Day’s career. It is also difficult to talk about its unofficial sequel, Lover Come Back, without frequent reference to the earlier film . . . suffice it to say at this point that the film restored and increased Day’s box office appeal, taking both her and [Rock] Hudson to new career heights and making them the most popular movie couple of the moment. Day was nominated for an Academy Award, and the media almost unanimously responded to this ‘new Doris’ who was seen as having ‘gone sexy.’”

While you have to love the idea of Day having gone sexy, the truth is that Day was emblematic of the millions of American women who had, at that moment in history, inexplicably gone sexy with here. Who opted for emulating Marilyn instead of Jackie, pillbox hat or no.

The power of this image on the silver screen, this woman whose hair started out golden blonde and then got blonder as George Masters morphed her into an unnatural platinum, powerfully illustrates Hollywood’s ability to both show us who we were, where we have been and to create the concept of where we are going, who we are in the process of becoming.

Which is, after all, the whole purpose of McDonald’s well-wrought book.

Could the same points have been made through an examination of the work and life of other stars? Is there much to be said about Bogart’s cigarettes or Garbo’s need for some alone time or Bette Davis’ eyes? Most certainly, but from the girly-pink and baby-blue of the aforementioned Romance on the High Seas, through the nudge-nudge, wink wink of The Glass Bottom Boat to the truly awful, wanton, Caprice, no other star better illustrates the author’s myriad cultural points than does America’s Vestal Virgin, Doris Day.

Doris Day Confidential is a thoughtful and thought-provoking work.