Dora Maar: Paris in the Time of Man Ray, Jean Cocteau, and Picasso 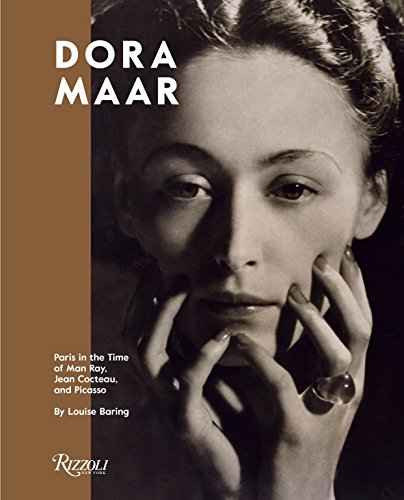 “a fascinating, stirring, and well-researched tale with insights into the thinking and lives of flawed people.”

Even a brief glance through Louise Baring’s biography of photographer Dora Maar is impressive enough to be riveting. Dora Maar’s avant-garde aesthetics, wit, and irony are amply displayed in its pages, as is her presence as a consummate photographer rooted in early 20th century art.

Those unfamiliar with Dora Maar may associate her name as one of Picasso’s lovers who shared his life for nearly ten years and was a frequent subject of his painted portraits. What many may not be aware of is that she was also a highly talented professional photographer with a well-established career in Paris before Picasso came into her life. She was also the photographer who through a sequence of photographs documented the creation of Picasso’s 25-foot anti-war painting, Guernica.

In the early 1930s, Maar was “a freethinking [woman] with libertarian leftist tendencies” who distinguished herself through her commercial photography for fashion and advertising. Her personal creative work was inclined towards surrealism and her photomontages were praised by the surrealist’s charismatic leader Andre Breton as, “the dizzying descent into ourselves . . . the perpetual excursion into the midst of forbidden territory.”

In 1933 Maar’s keen observation of street life resulted in photographs that are very similar to the work of another Parisian she had yet to meet, Henri Cartier-Bresson. In a 1994 interview Cartier-Bresson called her “a remarkable photographer,” adding that her work always had a “striking and mysterious” quality. At times her images also evoked the photographs of Man Ray and the painter Giorgio DeChirico.

Maar’s photographs appeared in publications alongside the work of André Kertész and Lásló Moholy-Nagy. She worked as a stills photographer on the set of Jean Renoir’s film, Le Crime de Monsieur Lange, and moved in the same circles of society as Andre Breton, Max Ernst, Jean Cocteau, and the photographer Brassaï, with whom she had shared a darkroom.

But the highly talented young Dora Maar caught the eye of Picasso, who seeing her portrait for the first time in a photograph taken by his friend Man Ray, became so enraptured that he traded an etching for it.

When Maar finally met and became enveloped in Picasso’s influence it evolved into a bittersweet relationship that would defy any attempts of becoming an emotionally rewarding romance. Picasso was 26 years her senior, already a successful artist, and Maar, believing that any effort to promote her own work would be tantamount to exploiting her status as his companion and muse, eventually shut down her photo studio to be with him.

But their relationship was bedeviled by his estranged wife Olga Khokhlova, whom he never divorced. Olga had left Picasso, taking their young son, Paulo, with her when she discovered that Picasso had a 17-year-old mistress, Marie-Thérèse Walter, who was pregnant with his child.

Marie-Thérèse had a daughter, Maya, whom Picasso doted on, and he would divide his time between them and Dora. According to Baring’s research, the attraction was easy to understand; Marie-Thérèse was a “simple, straight, easygoing girl who loved swimming and cycling. She had no social aspirations and was happy to remain in the background,” with Maya. Whereas Dora Maar was someone Picasso could relate to intellectually, “and discuss avant-garde painting, poetry, politics, and of course, photography.”

Things were also complicated by Picasso whose ego was such that he could not tolerate anyone surpassing him in any arena. He had fallen in love with a talented photographer but then strongly encouraged Dora to abandon photography and become a painter instead.

Although Maar continued to paint after her life with Picasso, she became a recluse rarely seeing friends or giving interviews, and never exhibiting her paintings or allowing her photographs to be publicized. Her work as a competent painter never exhibited the daring or creativity brought to fruition in her photography.

Louise Baring tells a story replete with aspirations, betrayal, and cruel heartbreak. Baring’s biography, Dora Maar: Paris in the Time of Man Ray, Jean Cocteau, and Picasso, is a fascinating, stirring, and well-researched tale with insights into the thinking and lives of flawed people who become much more than mere characters in a emotional narrative. Key to the biography are the over 130 images, the majority of which have never before been published, and include photographs and paintings by Maar, Picasso, Man Ray, and Cecil Beaton, with photographic portraits and self-portraits of Maar that flesh out this tragic story.