A Door Between Us 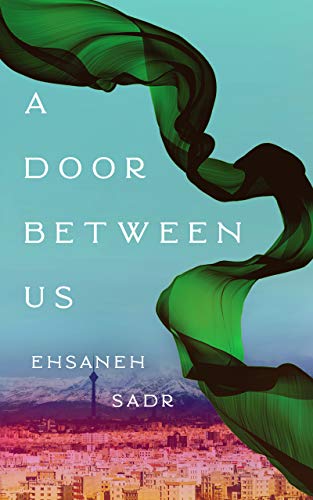 “Why struggle to open a door between us when the whole wall is an illusion?”

A favorite poem by Rumi comforts Azar, separated from her husband as she is incarcerated by a cruel and murderous member of the militia in this gripping novel. It is a question of meditation for this character as well as for the reader of A Door Between Us, by Ehsaneh Sadr, and for anyone separated by hard-held political and/or religious beliefs.

The kernel event that sets the contiguous incidents tumbling into the fate of this novel’s characters is a wedding, and a ride in the couples’ car toward their new home after the reception. The second event of significance is the June 12th presidential election in Iran in 2009.

Families of the bride and groom, like Romeo and Juliet, are each on different sides of the political spectrum as family members plot behind their backs hoping to undo this arranged marriage. As the furor over results of the recent election rage around them, on the way home from their wedding, the couple find themselves in bumper to bumper traffic in the middle of a Green Wave protest being dispersed by Baseej, a voluntary militia tasked with arresting protestors. Sarah, the bride, a young, politically naïve woman consumed with trivialities of modern life, her dress, her opulent wedding in one of Tehran’s most expensive hotels, invites a woman protestor to hide in the back of their car.

Although Ali and Sarah are not actively involved in the politics of the moment, they very quickly learn how serious this act is. It is the beginning of their months-long separation as the groom is taken in for questioning. It becomes weeks before Ali is returned, and by this time, their relationship is in jeopardy through these divisive political forces—and their respective families.

The modern, ordinary, daily lives of these families lull the reader into complacency, while the drumbeat of random political and societal forces surrounds them with its menace.

The cruelty of the militia and their severe agenda are not surprising, but the juxtaposition of modern urban Iranian life and the draconian methods of the Baseej add to the tension that characters begin to feel as the trap of fascism closes around their perfectly modern lives, incident by incident.

Family secrets, unexpected liaisons and relationships figure into this cultural tale. Added is the power men have over women in Iran, with the shackles of customs whose controlling origin is a patriarchal religion: obligations of dress and restrictions that forbid a woman to be alone in any kind of situation in public. Even the acceptance of polygamy for men causes many dramas for women, dramas they have no choice but to participate in.

What is most interesting is the thought processes and beliefs that characters use to justify their sometimes murderous activities.

The author has experienced these beliefs, implanted on the brains of every believer and repeated through prayers and meditation throughout their lives, and the reader is taken through the insidious mental gymnastics of characters who need to constantly justify their abhorrent actions. It’s easy to see how religion is used as an excuse, and to her credit, Sadr skillfully creates characters who behave with love and respect, and yet are driven by beliefs that can be twisted to hurt, injure, and destroy.

At first, the story is somewhat confusing if you aren’t accustomed to Iranian names such as Sadegh and Sumayeh, Mehri and Mahdiyeh, Azar, Alireza and

Abba, and there is a full page at the beginning of the novel spelling out the relationships and names of 19 characters who interact to make up the central story of the novel.

Much of the forward movement in the novel takes place as characters explain their actions to other characters, as they try to unravel secrets and their own family history, but the final confrontation of the religious and political forces is riveting in its unpredictability, violence and redemption.

It is a celebration of our connectedness, in spite of our best efforts to sort each other into Us and Them.