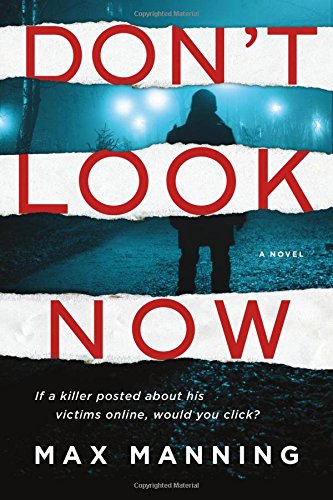 “Closer to a Jeffery Deaver manhunt emotionally, than to Nordic noir, Manning’s debut crime novel is a keeper.”

What are the keys to a serial killer crime novel well worth reading? Max Manning, a seasoned British journalist who’s covered crime and more for London’s big newspapers, crafts a modern “Jack the Ripper” in Don’t Look Now and takes readers along with the killer on a journey of multiple killings.

But in spite of direct glimpses of this nightmare’s thinking process, there’s no expectation of liking or even fully understanding the criminal here. Instead, Manning binds readers to the very different lives of two men who will risk losing everything for the sake of ending this crime spree.

One is Detective Chief Inspector Dan Fenton, who’s caught in a political net that won’t give him time to solve the crime, as the newspapers ramp up their pressure on his officers, on him, on New Scotland Yard. Suddenly a single parent, with a school-age daughter and a huge grieving hole blasted by his wife’s death from cancer, Fenton still needs to work overtime, maybe double, to clear the case that keeps growing with each new death.

Yet each time he breaks a promise to be home “soon” for his daughter or their new live-in nanny, he’s tormented. Yes, that kind of person, the kind who really cares about respect for others, kindness, obligations. How on earth can that kind of person survive a police bureaucracy?

Then there’s Adam Blake. At first, we only know he’s taking really hard the first murder. It’s the woman who’d been his girlfriend until a few weeks before, when she’d given up on him, especially his unwillingness (as she saw it) to get help for the frozen parts of his soul, massive remnants of an inner and outer wound that wasn’t his fault, but isn’t healing. It’s clear his friend Lauren Bishop was a random choice for the killer. Is there some reason Blake should turn back toward the broken relationship now, after this murder, and help seek the killer?

Those are the factors that Manning handles with enormous skill: keeping the suspense and danger frighteningly intense, while murders pile up and Fenton takes a public shaming for being unable to stop them, Blake struggles to function within “civilization” after his exiling, and pain shows itself in even the smallest gestures. Fenton is rubbing his eyes red; Blake might as well be sweating tears as he chases a hacker who might be able to help.

And that’s where the “modern” aspect of this serial killing plays out. The killer—readers know him only as @IKiller, from his Instagram account and other social media plays—has the same craving for public fame that the Ripper probably shared. But he’s tackling it through the most modern processes of publicizing cellphone photos of his victims before and after killing. London’s terrorized by the literal faces of terror and death. And by a disgusting fascination that emerges in the seams of the city.

“Blake took a couple of deep breaths. . . . ‘It’s down to human nature, I suppose,’ he said. ‘We’ve all got darkness somewhere inside.’

‘You really believe that?’

‘Why do you think drivers slow down to rubberneck at car crashes? Why are we fascinated by horror movies, TV coverage of disasters? Don’t ask me to explain it, because I can’t. The ghouls following the killer disgust me as much as they do you. It just doesn’t shock me as much.’”

Dark and focused on three men’s choices—those of Blake, Fenton, and the killer—Don’t Look Now uses the women in this story (the deceased girlfriend, her surviving sister, Fenton’s daughter) as measures of how much the crime solvers care. When their lives fall apart, will they be of any use to each other in stopping the killing?

Closer to a Jeffery Deaver manhunt emotionally, than to Nordic noir, Manning’s debut crime novel is a keeper.