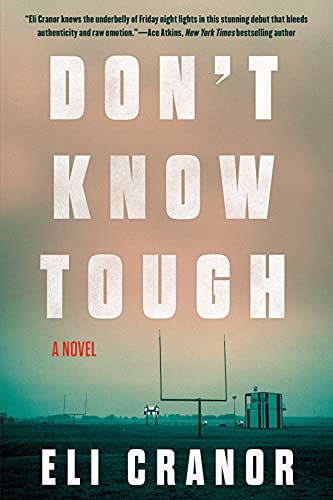 “Don’t Know Tough is southern gothic turned up to 11, written by a first-time author who knows the territory. Like . . . Friday Night Lights, it takes off the helmets to see both the men underneath and the cruel codes that drive them forward.”

Readers of Buzz Bissinger’s Friday Night Lights who come away, like Leonard Cohen, wanting it darker, would do well to investigate Don’t Know Tough by Eli Cranor. The book starts in a desperate place, and no further light gets in over the course of 322 pages.

The novel is about football in Denton, Arkansas, where the high school and the lone McDonald’s are the architectural highlights. A couple generations of Lowes have been standouts on the gridiron, but fraught in every other way—the product of a family where no one goes to college and life is played out in dismal trailers with abusive stepparents and substance abuse.

Into this cauldron comes Trent Powers, a born-again coach whose losing seasons in California—a job he got through his caustic wife’s powerhouse father—has propelled him to the one school that offered him a job. The Denton Pirates are now in the playoffs, and if Coach can just keep his volatile running back, Billy Lowe, in check and not running amok, maybe the family can escape to something better.

Billy is, not without reasons, the classic raging bull, but Coach thinks he can save him with prayer and a healing arm around the shoulder. It seems Trent was once a foster kid himself, so he imagines he “gets” Billy, shrugging off Principal Bradshaw’s warning: “You got to train boys like Billy, same way you would a dog,” he says.

Billy decks his boozy stepfather in the trailer, and from there events spiral into further tragedy. The coach’s beautiful California-bred daughter, Billy’s classmate, adds volatility to the mix. Lorna’s steeped in west coast irony and provocation and won’t wear a bra, things that might somehow be misconstrued in Arkansas.

And the coach’s wife, Marley, is willing to go to any length to get her family out of Denton. “I can stomach the stinking chicken houses and chatting up rednecks at the Kum & Go—but not for much longer,” she says.

Alternating chapters are told in Billy’s raw, instinctive voice. He may never have read a book all the way through, at least until Lorna gets him to finish Hemingway’s Old Man and the Sea, but he knows what works for him—brute force. Lest the reader judge, there may be more to Billy, and even to his even more brutish older brother, Jesse (another Denton football star), than is immediately apparent.

Don’t Know Tough is southern gothic turned up to 11, written by a first-time author who knows the territory. Cranor “played quarterback at every level, from peewee to professional,” and spent five years as a high school coach. Despite that, very little of the book takes place on the football field. Like the aforementioned Friday Night Lights, it takes off the helmets to see both the men underneath and the cruel codes that drive them forward.