Don't Call it a Cult: The Shocking Story of Keith Raniere and the Women of NXIVM 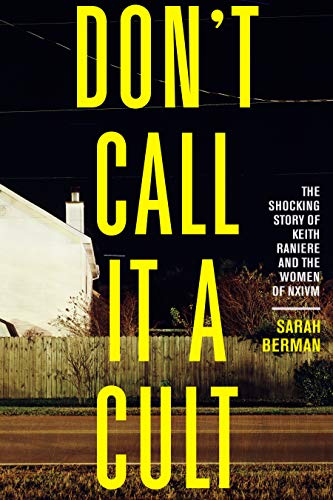 “Both captivating and frightening, Don’t Call it a Cult will astonish most readers.”

The whacky cult known as NXIVM (pronounced NEX-ee-um) was founded in 1998 by Keith Raniere, a self-proclaimed genius and veteran pyramid schemer, and Nancy Salzman, a former psychiatric nurse. The charming Raniere, now 60, was sentenced last year to 120 years in prison for sex trafficking, forced labor, and racketeering. His global organization, based in an Albany, N.Y., suburb, has been the subject of books and television shows, including former Vice editor Sarah Berman’s fine narrative, Don’t Call it a Cult.

Many have described NXIVM as a pyramid scheme, a sex-trafficking operation, a cult, and a sex cult. Raniere preferred to call it an executive coaching organization. Its members included rich, famous, and beautiful people, many of them college-educated daughters of wealthy white families. Pam Cafritz, daughter of Washington, D.C., socialites Buffy and William Cafritz, was a member. So were Clare and Sara Bronfman, daughters of billionaire Seagram’s chairman Edgar Bronfman, Sr.

In Don’t Call it a Cult, Berman details the story of Raniere and his group, the many ways in which he controlled devoted members, and his secret sexual relationships with as many as 20 women, each of whom thought she was his only lover. “You’re the special one,” he would tell each woman, promising she would give him his first-born child. Publicly, he had renounced all physical pleasures.

Berman’s story, while riveting, becomes so bizarre and convoluted that it deserves a companion key—a book much like the explanatory key available for readers of James Joyce’s Finnegans Wake.

Raniere, it turns out, was Brooklyn born (1960), a supposedly high-IQ graduate of Rensselaer Polytechnic Institute in Troy, N.Y., who believed self-interest could be the path to ethical behavior. Inspired by the ruthless characters of Ayn Rand’s Atlas Shrugged and The Fountainhead, in 1990 he created Consumers’ Buyline, a multi-level marketing program offering lucrative commissions to old customers for recruiting new ones. That ended when New York’s attorney general filed a suit charging his firm was a pyramid scheme. Then came a similar scheme, selling vitamins.

He hit his stride with NXIVM, “a self-help movement that appealed mostly to dreamers with deep pockets,” writes Berman. Begun as a “boutique executive coaching business for aspiring millionaires,” the outfit grew into a massive multilevel marketing enterprise, consisting of some 100 offshoot companies.

Raniere was the adored, Buddha-like figure at the center, surrounded by more than 100 women who were treated as “modern-day slaves,” forced to have sex under threats to release “life-destroying allegations.” The latter were gathered from the women’s confessions during Raniere’s lessons on “taking responsibility for your own feelings.”

Some 17,000 people attended NXIVM classes. For most, the experience was “like a smiley, slightly kooky summer camp for adults,” writes the author. The “lifers,” who went into the program whole hog and stayed—mainly white women “raised in private schools and country clubs”—were entranced by Raniere’s hypnotic gaze and his “unspoken success formula of self-denial and sacrifice.”

They responded wholeheartedly to NXIVM’s rituals—the secret handshakes, the sashes of different colors to denote each member’s rank, and the bowing to a photo of Raniere, whom they called “Vanguard.” Some slept with him; others reeled in new students, generally rich and well connected.

Many made cash contributions to Raniere during the annual 10-day celebration of his birthday.

Followers were wowed by his “world-healing, humanitarian messaging,” listened to his visions of creating his own country, and were surprised to learn they had been Nazis in their previous lives. One way they could atone for their Nazi sins was through “yogic enlightenment practices achieved through sex,” he said.

The young Bronfman sisters spent millions of dollars from their trust funds to cover Raniere’s failed commodities trades and real estate deals. They also helped arrange a preposterous meeting between Raniere and the Dalai Lama, ostensibly to bond over shared interests in ethics and compassion.

A watered-down version of the long-planned meeting took the form of an Albany lecture by his Holiness. By then, NXIVM was under investigation. “If you have done something wrong. You must accept, you must admit, change, make correction,” he told the crowd.

Raniere’s lovers were told to follow an extra-low-calorie diet. He liked women to weigh about 100 pounds. He punished those who ate too much by further restricting caloric intake.

As if to underscore his need for control, Rainiere had his initials branded into the pelvises of his slaves.

Berman’s book is full of stories. One describes a language program that Raniere developed called “Rainbow Cultural Garden.” Sold to wealthy families at upwards of $120,000 a year, the program had nannies speak different languages to pre-kindergarten children at early stage of development. Participating children were supposedly able to speak four to seven languages fluently. Families “believed that kids with language skills would probably have more empathy and would maybe score higher on intelligence tests.”

The program—offered in Monterrey, Miami, London, and Guatemala City—was touted as proof that NXIVM was “literally breeding a new, more evolved generation.”

The author concludes that Raniere’s followers were not just working for his company. “He held the keys to everything they owned and had the power to destroy all their important relationships. He was their therapist, their spiritual teacher, their second dad, their abusive lover. It was this power, fueled by the unlimited financial resources of heirs to the Seagram liquor fortune, that enabled Raniere to act above the law for so long.”

Both captivating and frightening, Don’t Call it a Cult will astonish most readers.