By Donald Spoto: Possessed: The Life of Joan Crawford 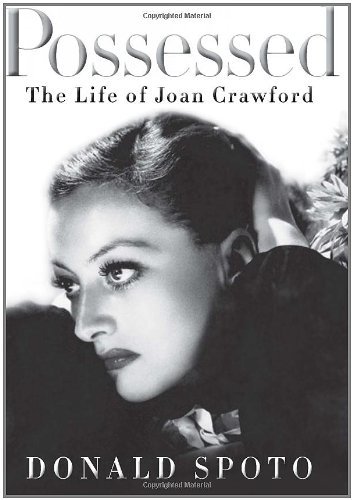 In Possessed: The Life of Joan Crawford, author Donald Spoto spends a good deal of time detailing Crawford’s life as an actress and defending her beauty, talent, and poise. To this end, he tends to let us know at what precise moment in the film we can expect to first see Joan in all her radiant glory.

We are told, for instance, that we will have to endure 30 minutes of The Women and lesser lights like Norma Shearer and Rosalind Russell before Joan makes her first appearance behind the perfume counter as husband-stealing temptress. Thus, those who are true Crawford aficionados will find in this book a perfect resource, one that will allow their fingers to rest on the fast forward button until just the right moment, saving both the time and emotional stress associated with having to watch performers other than Joan.

What Spoto fails to understand is that, like him, his readers are likely to be idling, turning pages rather listlessly, waiting, just waiting. As a public service, therefore, let it be stated that it is on page 197 that nasty little Christina Crawford and her autobiography, Mommie Dearest, rear their ugly heads.

Spoto has an agenda in writing Possessed, you see. He has come, he says, to set the record straight. To his thinking, Joan Crawford is a much-maligned lady. And she was, in his eyes, both a lady and a Star to the bitter end.

That she made Norma Shearer cry during the filming of The Women was but a momentary lapse and something that she regretted in later years.

That she so browbeat director Michael Curtiz that he ultimately allowed her to create for him a set of secret signals by which he might direct her without letting anyone else know that she allowed him to was just a method of saving face—hers at least, if not Cutiz’s.

And that she, on her last day at MGM after a generation of filmmaking that took her from her flapper days in silent pictures to World War II, took the time not to say goodbye to the crew members who had lit her, miked her, done her hair, and costumed her, instead scrubbing her dressing room from top to bottom, bathroom to kitchenette, leaving it immaculately ready for its next occupant—well, that surely was no indication of any . . . tendencies that Crawford might have possessed. It was only good manners.

In fact, the Joan Crawford presented in these pages is so good-mannered, so well-intentioned, and so high-toned that one wonders at single word that has been selected as the book’s name. The reader, perplexed at the intensity of the title Possessed might suggest that, given the book’s content, a better choice might well have been Fastidious.

But back to Christina and her memoir, which has come to define Joan Crawford in the public imagination. Spoto writes, “There is a strange and enduring paradox about Mommie Dearest and its author—indeed, there seems to be a glaring logical flaw at its center.

“Christina Crawford asserted that her life was blighted by Joan’s cruelty. But from the age of ten—precisely when she claims the punitive disciplinary acts shifted into full gear—Christina was in fact having a considerable success at several schools, where she enjoyed the admiration of her teachers and the friendship of her classmates. . . . She worked hard from a very early age, trying to be as successful, in her way, as her mother.

“Mommie Dearest, and the grotesque 1981 movie based on it, shaped a lasting but unbalanced view of Joan Crawford that endured for decades after. Downplaying Joan’s talents, the collective significance of her movies, and her impact on popular culture, Christina portrayed her mother as a monstrously abusive, alcoholic tyrant.”

Of the most indelible sequence in Christina’s book, Spoto continues, “Perhaps most notoriously, according to Christina, Joan became psychotic with rage when she went to her daughter’s closet and found that some of the clothes suspended on wire hangers instead of the upholstered ones mandated to prevent stretch marks on the fabrics. This incident, which inspired the movie’s most bizarre and infamous scene, actually reflected a time when Joan forbade hangers rather than a time when she nearly killed the child for using those hangers. (Christina never wrote that she was beaten with wire hangers, but rather that she was beaten because she had wire hangers in her closet.)

“But the truth of the matter is that the laundry company and the dry cleaners to which Joan entrusted the family’s clothes were under strict instructions to return all clothing on the richly covered hangers Joan provided. Could the company have failed once and thus caused Joan’s irrational outburst? Possibly—except that the task of returning the clothes to the wardrobes after the deliveries was assigned to the housekeeper. Had this instruction been contravened or omitted, heads (or at least jobs) would have rolled. Hence, the episode of the hangers refers to an injunction from Joan reworked by Christina as an actual event that precipitated a mad scene worthy of Italian opera.”

Thus the author—one wonders whether or not to go so far as to refer to him as a “biographer”—inserts himself into the story to such a degree here that he forces the reader to ask the identity of the person who actually was in the room at the moment in which the fastidious Joan noticed the offending hangers and witnessed her subsequent response: daughter Christina or author Spoto?

Indeed, throughout the pages of Possessed, it is the author himself who seems the subject of possession, with Crawford as the object. It is as if he has confused the black-and-white fiction of long-suffering motherhood shown in Mildred Pierce, a movie in which Crawford was convincing enough in order to win an Academy Award, with the flesh-toned reality of the life of the woman born Lucille Fay Le Sueur. And sadly, Spoto seems to feel that he has found his Veda, Pierce’s spoiled an ultimately murderous child, in mother-betraying Christina who is the cardboard villain of the piece.

That he can overlook the fact that Crawford illegally adopted all four of her children by literally buying them from baby brokers, adopting them in other states in which single parent adoptions were allowed, and then bringing them into the state of California with her team of lawyers standing ready to appeal to the courts to allow the “adoptions” to stand, while damning Mommie Dearest as fiction because, in it, Christina misremembers the year in which The King and I was filmed illustrates level of delusion contained between the covers.

In the end, the reader concludes that, even though Donald Spoto has a great deal to say about movie legend Joan Crawford, about the truth of the woman behind that legend, he has very little to add to the story that we have already been told.

Oh, and as a public service for those who want to hit the highlights without having to endure the Dali-esque verbal landscape that is Possessed, let it be known that the story of the making of Whatever Happened to Baby Jane begins on page 252.