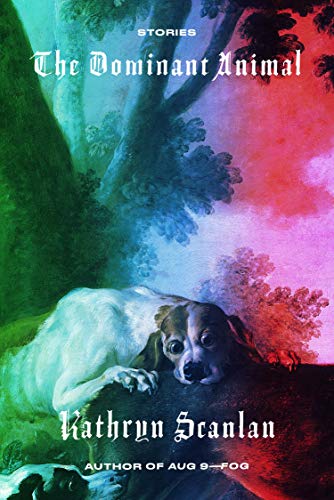 Forty stories in 160 pages. Short: some one page, a couple, four to five pages. Short: but with a bang. Short: You will read in a flash and say, “What was that?”

The theme of this collection: What twist is the author going to stick in her tale this time? Most of the stories do not cohere. They start one place and end up somewhere completely different. Many last paragraphs appear to have been lifted from another story.

In “The Candidate” a young woman describes her vacation trip with a family, the daughter’s first period, her own orientation to menstruation in high school, playing in the pool on vacation. The last paragraph jumps decades “Now the mother is dead. The dog is dead. The girl has a little boy. . . . The father has a new dog and a new wife and a new house.”

The title story “The Dominant Animal” features a woman who owns two dogs, the larger kills the smaller dog, she moves to another neighborhood full of dogs, she walks into a room full of people, is led away by a man into a dark treed area. “I turned to the man. He opened his mouth and made a long sound. . . . It came from him in starts and stops in a rhythm that was not unfamiliar.”

Many stories are about broken people in broken situations. “Men of the Woods” contains a number of them: “He was a sharpshooter in the war, but now did odd jobs . . . shoveling run-over animals from the road and driving them to where they were burned.” “He nursed the rabbit kits. . . . He tried to be gentle, but it was hard. . . . One little rabbit he dropped on its head from great height. One he squished beneath his heavy booted foot.” “His grandmother was very old, and his mother was sick from her life, so they sat tethered in a blue spell on the sofa.”

The reader does not care what happens in many of the tales, even in tragedy. In “Salad Days” a couple raid a buffet at a casino, play the slots, win, then golf without paying greens fees, thanks to a friend. One day the buffet is off, they lose at the slots, the friend is not there to comp their fees, she is flung out of the golf cart (his driving). “And then—like some kind of miracle—someone shouted Fore! And a neon-green ball materialized. It struck him on the side of the head. He made a sound like a cushion deflating. He fell to the ground.” Her partner is dead. In “Derland” “It was the face he [Derland] made when I jammed my knee into him and pushed him down the cellar steps.” Because he hassled her.

The stories do not fail because of their length. Many authors, notably Lydia Davis, write short cryptic tales, say something interesting, make the reader care about the characters. And for the interested there is a collection from several authors online. “11 Short Stories You Must Read Immediately,” Literary Hub, July 13, 2017.

A reader of Scanlan’s work can understand why each story has been published in renowned journals. They are small hors d’oeuvres, they go down in a flash, some are ticklish, some are treacly, some are spicy, but few are memorable. To have 40 different pieces over the course of an evening is not the recipe for a delicious repast.

And readers will relish the author’s unique observations, and there are many. “A crying baby “sounds like a nest of squirrels I found after a storm. One of them had died in the fall from the tree, and the other two chattered next to it, to me, as though to tell me of their troubles.” “When the children left, his wife’s body began dismantling her from the inside out.” And one of the best: “Arranging flowers was Aunt Mildred’s special talent. . . . When she married Uncle Dick, she made herself a tourniquet of love-lies-bleeding.”