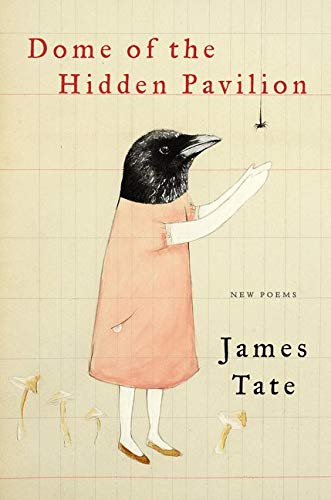 It’s that period when some of the once “younger” contemporary poets are leaving us. Last year we lost Galway Kinnel, Russell Edson, Mark Strand, and Philip Levine, and now James Tate (July 15, 2015), all of whom were Pulitzer Prize winning poets. Tate leaves us with this last collection of poems and prose-poems, Dome of the Hidden Pavilion.

Tate was often labeled a “new surrealist” for his imaginative projections of the daily into the almost absurd, along with fellow “surrealists” Charles Simic, Russell Edson, Michael Benedikt, and others. And yet it was more of a surrealism with the eyes open, often a strange mix of the comic and serious.

Tate once told the Paris Review that he preferred his serious poems: "There is nothing better than [to move the reader deeply]. I love my funny poems, but I’d rather break your heart. And if I can do both in the same poem, that’s the best. If you laughed earlier in the poem, and I bring you close to tears in the end, that’s the best."

The poems and prose-poems of this his 17th book all use his inimitable narrative voice, and it runs akin to the reader’s own bemused yet concerned response. All of the poems deal with the dialogue format of “he said . . . I said . . . he said . . . I said” and yet each undercuts the very act of communication with misperception and miscommunication.

The opening section deals in his unique and provocative way with a world of violence and war. And yet there is no real outrage about this, paralleling the way we deal with war and gun violence. We speak of it much and yet do nothing about it. These kind of dark themes underlie the simple almost whimsical portrayal of events.

Though the style varies some from section to section, this sample of the prose-poetry format may convey his approach. Titled “Peace,” it begins lyrical and conventional:

I sat on the porch watching the sunset. It was especially

beautiful tonight, seeming to last a long time. A flock of ducks

flew over hurrying toward their pond. I felt very peaceful.

My job was going well. I had been given a raise. I was next in

life for manager. The sun was down and the lightning bugs had

come out. There was a full moon in the sky. A man walked out

An inquiry ensues about the nature of this surveillance, and then there is a confrontation:

. . . “You were just sitting here by yourself doing nothing?”

he said. “I watched the sunset. It was quite lovely,” I said.

maybe I’m not. It makes no difference to me. Now get out of

this house before I tear your head off,” I said. I chased him out

the front door, pounding on his head. I went back to the

front porch and gazed at the stars. There is so much trouble

in the world a little peace is a precious thing.

Tate takes us on many such journeys in these dreamlike meanderings for meaning of some kind. On reading Tate, one feels as though he has gotten inside one’s head and drawn you into an absurdly real transcript. We will miss Tate’s dark wit and wild imagination, yet perhaps we will appreciate more his relevance as one of our most versatile poets.