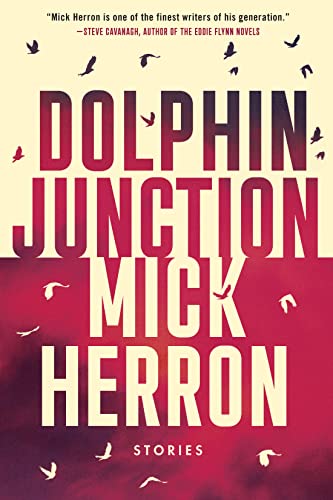 “These tales are presented as humorous, but it’s a humor that hides a piercing sorrow at the state of the world and the costs of love and friendship in such a world.”

Mick Herron’s Slough House espionage series is one of the most addicting for crime fiction readers who treasure his blend of cynical reality, dark humor, and persistent affection—an irony in a group of British “spies” whose main trait in common, besides sharing exile in a disastrous old building, is their recent failure at work. Whether it’s through alcoholic office romance or getting your colleagues killed, the men and women at Slough House know they’re no longer welcome in polite (or honored) company. This of course frees them up to take ridiculous risks under the leadership of the ever-farting (but undeniably brilliant) Jackson Lamb.

But when he’s not stringing together these complicated novels that struggle toward redemption as if it were the one patch of solid ground in the Great Dismal Swamp, what does mild-mannered Mick Herron do to fill his time? Judging by the story collection Dolphin Junction, which extends back to 2006, Herron plays around with characters doomed to be themselves—and to accidentally sometimes resolve “situations.” But never in an expected way!

The collection is framed with tales of Joe Silvermann and Zoë Boehm, a couple whose dynamics are actually worse than the Slough House frictions. In “Mirror Images,” Joe impulsively accepts a client who’s a paid killer with a problem. After explaining what’s keeping him up at night (and it’s surely not regret), the unlikely Nigel Reeve-Holkham tells Joe, “I think I made a mistake in killing him. And I need to know what it was, so I don’t make the same mistake again.”

Unfortunately for Joe, it will be Zoë who “solves” the case and makes it possible for them to collect their fee. Herron’s twist to the solution is painful and wry and sets the tone for the rest of the stories, which generally feature brilliant twists away from the expected. After a few of these, the author’s sleight of hand is expected, but never predictable. If life’s become dull or work has lost its glamor, dipping into a Mick Herron tale will at least convince a reader, for an hour at a time, that things could be worse. A lot worse. And that it’s all worth laughing at, anyway.

The eleven stories in Dolphin Junction were all published previously but would be hard to gather on your own. So it’s luxurious to settle in with them and to trust Herron to surprise you. One of the most delicious features Jackson Lamb and his sometimes nemesis Molly Doran, essentially a spy organization’s sneaky archivist. In between the jabs they hurl at each other is the core truth of their relationship, as Molly discovers Jackson has, after all, come to assist her. When she comments that he’s arrived, he declares simply that he pays his debts: “Because that was what this was. He owed her a favour, and here she would collect, in the process illuminating one of the mysteries that haunted her archives.” The story, “Dead Letter,” turns out to be Molly’s lengthy revelation of an unsolved case to Lamb, and in exchange she wants the one name that will complete the story. “He owed her, as he’d said. And spooks pay their debts, or at least the best of them do.”

These tales are presented as humorous, but it’s a humor that hides a piercing sorrow at the state of the world and the costs of love and friendship in such a world, in terms of both espionage and investigations. Herron’s ability to present that poignant insight, disguised by schoolboy farts and pranks, makes his stories a gift to the spirit. Or, in a humbler sense, makes them worth reading at least twice. They make a lot more sense than double-checking Santa’s list.