Doing Justice: A Prosecutor's Thoughts on Crime, Punishment, and the Rule of Law 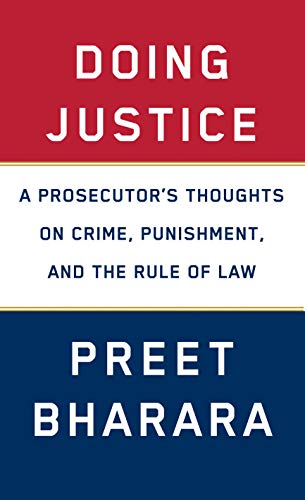 “Doing Justice is an essential read for every American who cares about the rule of law and the pursuit of justice in the United States, particularly at a time when these ideals are a constant subject of attack for self-serving political purposes.”

Early in his book Doing Justice: A Prosecutor’s Thoughts on Crime, Punishment, and the Rule of Law, Preet Bharara introduces a chapter with a description of the front lobby of the Southern District of New York’s headquarters. In particular, he draws our attention to a memorial to investigator Kenneth McCabe, which he tells us occupies “the moral center of that lobby.”

That Preet Bharara believes a place can have a moral center tells you everything you need to know about this man and his book. His objective is to help readers “understand how justice is supposed to be accomplished.” Reminding us that he constantly coached his staff as U.S. Attorney for the SDNY to “Do the right thing, in the right way, for the right reasons,” he also stresses that the process followed in pursuing justice must adhere to that well-known principle from English common law that “justice must not only be done, but also must be seen to be done.”

Bharara’s steadfast devotion to the rule of law and due process permeates every page of this book, which he explains grew from a desire early in his tenure as U.S. Attorney to create a guidebook for young prosecutors.

The structure of Doing Justice reflects this ongoing impulse to educate, inform, and coach. It’s divided into four parts: Inquiry, exploring the ins and outs of criminal investigation; Accusation, considering when to prosecute and when to walk away; Judgment, examining the role of judges and how to deal with them; and Punishment, reflecting on the importance of ensuring that sentencing and incarceration are fair and just.

While his study of the rule of law, criminal prosecution, and the pursuit of justice is informed throughout by his elevated sense of a moral imperative, readers must understand right up front that the motif to which he constantly returns in his book, the iron rod of an idea that runs through it from one end to the other, is this:

“The law doesn’t do justice. People do.”

Preet Bharara constantly reminds us that at every turn the law is a sphere inhabited by people. Judges are people, often fallible and quirky, and must be treated not only with respect but also occasional humor. Victims are people, and must always be treated with dignity and respect, whether they’re the young wife of a criminal shot in bed with her husband or a prostitute and drug addict who’s been robbed of her savings. Even snitches, aka cooperating witnesses, are human beings who deserve to be handled with fairness and objectivity.

One of the more charming aspects of this book, and there are several, is that Bharara freely discusses his own human limitations. He admits, for example, that he found it cool to sit in a room with a known mobster turned informant. “Cool to learn the slang, the methods, the rituals, to hear about the brutality of life on the street.” These are, he acknowledges, feelings that are “hard to keep in equipose . . . [but are] part of seeing a three-dimensional person.”

He also reveals instances in which he hesitated before making important decisions. Where he sought advice and guidance from multiple sources on whether to wiretap or not, arrest or not, indict or not, take a deal or not. Where he believes he might have made the wrong choice for the right reasons, or vice versa. Prosecutors, he shows us, are people, too.

Another charming aspect of Doing Justice, to follow that thread, is that Preet Bharara writes the same way that he speaks. The host of his own podcast, Bharara may be better known these days for his regular appearances on CNN as a senior legal analyst. What important news development related to the Mueller inquiry, for example, would be complete without Preet Bharara’s insight?

His commentary is always measured, thoughtful, and intelligent. He goes out of his way to remain objective, but won’t back down from calling out egregious actions or statements when he feels he must. When he speaks, his sentences are often interrupted by very brief pauses in which he considers whether or not to adjust his vocabulary up or down, or whether to make a direct reference or an indirect allusion with obvious implications.

Thankfully, he’s written his book in the same style. It’s easily read, conversational, and with short digressions that turn out to be effective amplifications of his central point. His treatment of Donald Trump and the revolving cast of characters connected to the Mueller probe, such as Michael Cohen, is almost exclusively of the indirect allusion kind. A few quick punches slipped in during clinches, as it were.

Additionally, his sense of humor lightens the subject matter when it tends toward heaviness, and he consciously employs colloquialisms such as “super impressive,” “noggin,” and “hinked up” to avoid turning over to readers a bone-dry legal textbook.

Perhaps the most charming moment of all, to conclude that particular thread, comes when he recalls the aftermath of an especially satisfying trial where he handed his ten-year-old daughter a newspaper splashed with coverage of his victory. As he waits with anticipation for her reaction to his heroics, she “tilts her head, and in a flat voice says, ‘Daddy, why are you such a drama queen?’” Yes, Preet Bharara the father is a human being, too.

Doing Justice is an essential read for every American who cares about the rule of law and the pursuit of justice in the United States, particularly at a time when these ideals are a constant subject of attack for self-serving political purposes.

If the law is your business, or if it’s the subject of your studies, you need to read this book. Equally, anyone with an interest in, and concern for, justice as an objective pursuit of truth must take advantage of this unique opportunity to pick the brain of an exceptional man who has made the pursuit of justice his life’s work.

Buy it, read it, take lots of notes, mark up the index, put it in an easily findable spot on your bookshelf, and accept the fact that you’re going to be going back to it again and again to remind yourself that intelligence, objectivity, and a light sense of humor all have an extremely important place in today’s public debate about the future of the rule of law in the United States of America.