Of Dogs and Other People: The Art of Roy De Forest 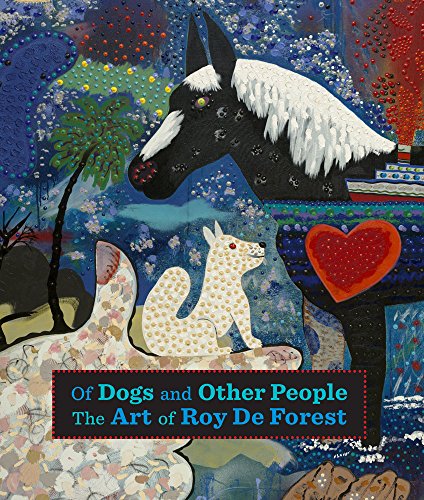 Of Dogs and Other People: The Art of Roy De Forest does a wonderful job of presenting both the person of Roy De Forest and the artwork he created. Roy De Forest (1930–2007) was an illustrious artist and an unconventional art educator full of imagination, innovation, and intelligence. He forged a unique path, a path many, including author Susan Landauer, would describe as a little bit nutty.

One need only look at the cover of this book to see just how imaginative De Forest was. He jam packed his canvases with vivid colors, complex textures of energetic dots, dashes and strokes, and whimsical, yet sometimes unidentifiable, “dispersive” subject matters and motifs. The naming of his grand paintings (often sized over six feet) intrigued as much as the works themselves. Titles like Autobiography of a Sunflower Merchant, Painting for Pedagogues, and My Life and Times in Yakima do little to shed light on any concrete narrative but do much to spark the viewer’s imagination.

Try as one might, the only two logical conclusions to deciphering a De Forest would be to admit that one is nutty oneself having gone crazy trying to interpret meaning, or that De Forest himself was indeed the nut to be lunatic enough to conceive of such paintings as bona fide artworks. And so it appears that it is De Forest who embraced and personified the Nut Art movement claiming it to be “a squirrel in the forests of visual delights . . . [which] . . . adheres to the frenetic, squirrel-like agenda of engagement, desire, dissonance, and affection.” Enthusiasts are invited to “crack this nut and savor the pith within.”

De Forest embraced artistic innovation. He paid rapt attention to the artists around him, adopting techniques, modifying materials, exploring compositions, and debating movements—accepting some, rejecting many. Surrounded by a veritable Who’s Who of the mid-century California contemporary art scene, he forged a name for himself and maintained a prosperous, successful career that spanned five decades. He was sought out to teach, speak, exhibit, and sell in galleries around the world. No small accomplishment for a man who likes to draw amoeba shapes and squiggles!

There was a certain charming intelligence in De Forest. Looking at photographs of him, he holds a boy-next-door playful smirk, tousled hair and relaxed body language. Paired with a wild patterned home-made shirt and happy companions be they human or canine, De Forest looks just like one of his paintings: playful, at ease, inviting, thoughtful. He was a well-educated, curious devourer of books, ideas, and adventures—an appetite he transferred unreservedly into his artwork.

In this thoroughly professional, immaculately organized, and factually overflowing book, the reader is set to be inspired by the adventure that was Roy De Forest. One will encounter De Forest’s life biography timeline, his group of artistic influences, his subject matter inspirations, his educational contributions, and, most important, 124 full color pictures of his paintings and sculptures.

The paintings, as De Forest hoped they would, sparkle and dazzle. New things are discovered every time. Looking at a De Forest, says Landauer, “is like looking into a kaleidoscope. Returning to a work is tantamount to giving that kaleidoscope a shake.”

After digesting this wealth of material, De Forest would still claim that one has not yet begun to understand who he was. Maintaining that he never liked to “think too much about the meaning of his work for fear that its power would somehow evaporate.” He thought of his work as imaginative synthetic fabrications rather than the products of self-expression and rejected the idea that an artist’s work revealed the artist. Will the world ever know De Forest? It is hard to say. Between his thoughts, actions, paintings, interests and relationships he remains forever a nod to the extended metaphor: a “tough nut to crack.”