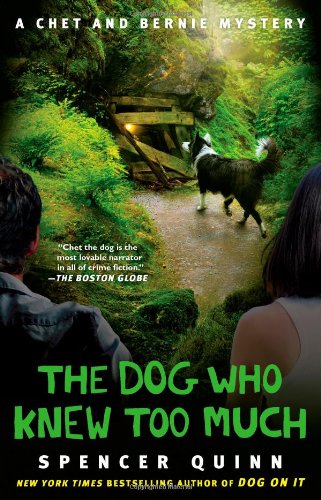 “In The Dog Who Knew Too Much, the mountains hide secrets that some folks want to keep covered up. . . . There’s small town corruption, and the FBI is involved, but the joy lies in believing Chet and believing in Chet. Everything is going to turn out all right.”

This is the fourth book in a truly delightful series, and in an extraordinary development, this series actually gets better with each installment. Writing a book with an unreliable narrator is a job for a skilled writer. Making that narrator a dog without being twee and gushingly sentimental is a job for a master. The secret is out: Spencer Quinn is a pseudonym for Peter Abraham, who writes thrillers for adults; his Reality Check won the 2010 Edgar for Best Young Adult Mystery.

You don’t have to be a dog lover to read this series, but you do have to believe communication between dog and master is genuine.

Bernie’s finances are decidedly low (those tin futures didn’t quite work out) so he and Chet are searching for a boy who goes missing on a camping trip. Devin’s mother Anya sent him to a camp actually “More of a build-you-into-a-man-wilderness-thing” in the hopes he’d lose the weight he was teased about in school.

Is this a case of a father snatching his son? But the father doesn’t really seem to be all that interested in his son—so why risk kidnapping? And when Bernie discovers that the boy slept outside the tent the night he disappeared, was that a clue—or did he always do that and no one noticed?

Chet knows his part: “Nighttime security was part of my job. Grabbing perps by the pant leg is another. That’s how we know the case is closed here at the Little Detective Agency . . .” (And if sometimes there’s a little more leg than pant, so be it.)

Chet also knows what Bernie’s part is: “. . . Bernie screwing it up: impossible.”

Chet’s faith is well placed because Bernie really does know what he’s doing. Under his gentle and intuitive questioning the truth will out. When he asks Anya if her husband ever hit her and she says “Not really.” Bernie replies “I’m going to take that as a yes.”

When the case takes the two gumshoes into the mountains, Chet encounters snow for the first time.

“Bernie picked up some and patted it—hey—into the shape of a ball. Yes! One thing about Bernie; just when you think he’s done with amazing you, he amazes you again. Now, after all this time, I was just finding out he could turn snow into a ball.”

In The Dog Who Knew Too Much, the mountains hide secrets that some folks want to keep covered up. When one character calls the dog Chetster—you know he’s a bad guy.

There’s small town corruption, and the FBI is involved, but they joy lies in believing Chet and believing in Chet. Everything is going to turn out all right.