Dog Man: Lord of the Fleas: From the Creator of Captain Underpants (Dog Man #5) 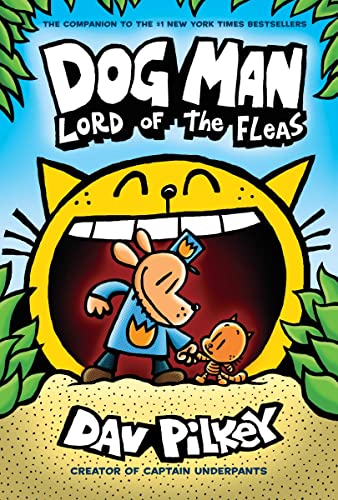 With this fifth graphic novel in the Dog Man series, Dav Pilkey shows no signs of slowing down. Lord of the Fleas is packed with all the visual gags, bad puns, and nonstop silliness his readers have come to expect, along with (gasp!) a few genuinely heartfelt moments. As always, the art is funny, colorful, and engaging, rendered (supposedly) by Harold and George of Captain Underpants fame.

The plot kicks into motion when a supposed representative of Kitty Protective Services comes to take Lil’ Petey (the clone/son of Petey, the world’s most evil-est cat) away from Dog Man, who has been taking care of the kitten. Of course, the representative turns out to be none other than evil Petey himself in disguise. Through a series of flashbacks, Petey recounts to Lil’ Petey the tale of how he turned evil, interrupted at every turn by the kitten.

Lil’ Petey, by the way, is the true standout character of the book. A recognizable, hilarious little kid, he pesters adults with a litany of “Why? Why? Why?” and deliciously unfunny knock-knock jokes. (“Knock, knock.” “Who’s there?” “A flower.” “A flower who?” “A flower pooped on your head!”)

When three badder bad guys show up, led by the villainous Piggy (in a nod to Lord of the Flies), Lil’ Petey tries to convince his father, “You can change, Papa.” He urges the doubtful Petey to fight on the side of good. Through an epic battle involving a robot brontosaurus, a giant cat robot, fight scenes in Flip-o-Rama, and massive silliness, the kitten continues his faith in Petey, helping him to see the light.

Along the way, Pilkey throws in tons of puns: Dog Man’s crime-fighting alter ego is The Bark Night, and when he’s hurled into a building labeled “Cannery Grow,” he grows to Godzilla size. There are jokes just for grownups, like the Lord of the Flies references or the goofy, Warhol-like paintings on the wall of Dog Man’s doghouse. And throughout, the dialogue is snappy and comical, as when Lil’ Petey wants to borrow an enormous can of spray paint. “Excuse me, Mr. Squirty, may I have this?” “OK, strange flying cyborg kitten I’ve never met before. Take whatever you like!”

It’s safe to say that Pilkey’s legions of readers will gobble up this latest installment of Dog Man like the hero himself would tackle premium dog chow.