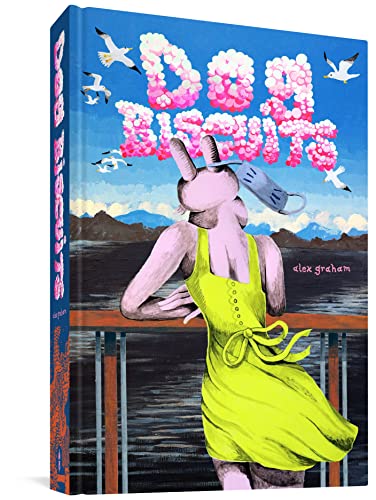 We’re far enough into the limbo stage of the Covid-19 pandemic (it’s over, it’s not over, it’s over, it’s not over) to have started welcoming the first wave of pandemic-inspired literature, such as Gary Shteyngart’s Our Country Friends and Louise Erdrich’s magnificent The Sentence. Alex Graham’s graphic novel Dog Biscuits is a worthy addition to the genre.

The bulk of the action takes place over a series of a few days in June 2020 at the height of the early Covid lockdown and the George Floyd protests. We’re only two years removed from this pivotal cultural moment—long enough for memory to minimize and warp what we were feeling. While other pandemic literature might have been created during the lockdown(s) of 2020, Graham wrote and posted the panels that make up Dog Biscuits in real time to Instagram. The book’s seat-of-your-pants origin story gives it a certain sense of forward momentum, even with a relatively simple plot.

Dog Biscuits tells the story of a love triangle between Gussy, a frustrated artist running a gourmet dog biscuit bakery; Rosie, a woman with a tendency towards emotional self-destruction who’s half his age and also one of his employees; and Hissy, Rosie’s privileged and self-absorbed roommate.

A love triangle is a fairly standard plot. While there is the to-be-expected sex and drugs, as well as police brutality, the real action is internal to the characters. Graham makes it compelling by creating smart, hyper-verbal characters living in a 2020 version of Seattle that is the epicenter of both pandemic and protest. It is a world we know too well—masks and fear of a spreading the virus and Karen videos and police brutality and protests and isolation. And it’s also a slightly meta world. Graham’s Seattle is populated equally by human and non-human characters. Gussy is a dog. Rosie is a rabbit. Hissy is part iguana, part human. Read into any of these what you will.

A graphic novel demands showing over telling, and Graham’s characters are laid bare in six-panel segments. Without a narrative voice guiding the reader, we have to rely on the characters’ internal and external monologues to give us a glimpse of their past and some clues as to why they do what they do. For instance, Rosie’s interior monologue as she goes out for a run:

“Petunia is right . . . I’m young & wild & hot!! But how easy it is to forget. Social media is poison. Truly one of the worst things to ever happen to civilization. The internet could have been, ideally, a resolution to all of society’s problems; a tool for the betterment of the world at large. It could’ve brought people together . . . But overall, it seems incompatible with our primeval competitive urge for survival. The fact of the matter is, I’m lucky to wake up every day in the vessel called Rosie Fields. And the only person who can take that away from me is myself, in moments of insecurity.”

Later, when Rosie and Hissy are smoking and drinking in their backyard, Hissy delivers a lengthy monologue on gender expression that reads, in part:

“Y’know, I think it’s so fucking weird how our generation pretends to be so sexually liberated & forward thinking, yet whenever someone does or says something outside of the strict language parameters we’ve constructed, it’s seen as a thing to be judged at minimum, or even a reason to denounce someone entirely. And we also do this weird thing where individual people assign themselves as like, the ambassador of All Bisexuals or like, the Arbitrator of Everything Nonbinary etc. etc. As if the experience of gender expression & sexuality belong only to people who (have the privilege to) learn the stringent language thresholds, rather than being something that every human being on earth grapples with in different unique ways and allowing for variation beyond the confines of one’s individual sense of reality.”

If these sound like folks you want to hang out with, then Dog Biscuits is your book. If not, you may want to pass, for while the main characters may be drawn as animals, they are painfully, imperfectly human. They may frustrate and annoy you. However, if you give them a chance, they’ll bring you to a resolution that is, if not entirely satisfying, certainly fitting.