A Dog Runs Through It: Poems 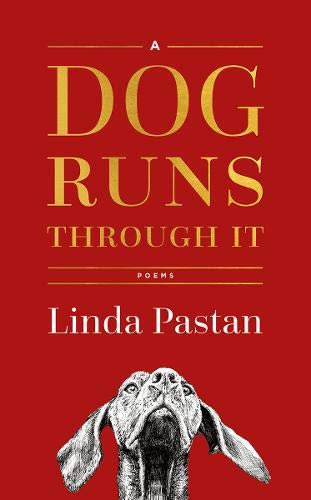 Linda Pastan’s new collection, A Dog Runs Through It, is about the poet’s ownership and lifetime admiration of dogs, not only as pets but also as friends and teachers.

Dogs are wise and offer simple, clear, and inquisitive views of the world that teach the reader to appreciate, and learn from, pedestrian things, such as squirrels, trees, and skies. Mary Oliver published a book of poetry inspired by dogs in 2015, so apparently canines are in vogue. Oliver’s book was published by Penguin, Pastan’s by W. W. Norton. W. W. Norton does not usually publish poetry, which makes this collection a curious choice.

A Dog Runs Through It is a quick read at 62 pages, including skillful illustrations of dogs playing, sleeping, running, or staring. The majority of the poems are paired with drawings. This is not a revolutionary decision for Pastan, as many contemporary poets are illustrating collections to provide context and accessibility. Sometimes images are not enough to gain attention, so visual elements are introduced, especially for younger readers.

“Departures,” arguably the strongest poem, is one stanza about a dog barking at an empty tree vacated by an acrobatic squirrel. The squirrel teases the dog, confounds it. “He barks and barks, and the squirrel / leaps ten trees away leaving / the leaf tops trembling like trampolines / after an acrobat is through.” The squirrel is dazzling in its simple, carefree movement. It does not love the dog, yet still the dog is fascinated by its divisive acrobatics, thus creating a metaphor for passionate longing.

Another interesting poem is “The Art of the Dog.” The poet references artists such as Cassatt and Picasso, as well as cave paintings, to prove that art captures the everlasting intricacies of dogs, and therefore concretes their permanence in art history. The third stanza says the following: “It’s said that dogs in paintings / domesticate the scene or symbolize love, / that even a still life of flowers and fruit / may have a poodle or dachshund / hidden under the table.”

These five lines reflect the tenor of the entire collection: dogs equal love, and even a slight mention of one in a poem fortifies its meaning. The last two lines are “At night the museums echo / with the unleashed sound of barking.” Barks are echoing arias in this poem, as well as the entire collection, to reinforce and embolden meaning.

“Animals” risks alienating readers who are unfamiliar with Christianity, as the poem contains stark Biblical references to “Adam,” “Eden,” “Christ,” the “Ark,” and the “Lamb of God.” It also asks open-ended questions, which the reader might not know the answers to, about where animals might go on “freezing nights” and where they would learn to “sharpen fangs and claws.” But the poem ends by comparing dogs to “steers,” praising how stalwart they are because they survived when Eden “shut on them…”

Pastan’s poems are simple, which is the motherlode of poetry because they appeal to all readers, not just academics. The poems are well-crafted and have strong line breaks, disallowing confusion. Readers will enjoy the simplicity and clarity of this collection, one that captures how dogs inspire us, and what we can learn from our best friends.