Does This Baby Make Me Look Straight? Confessions of a Gay Dad 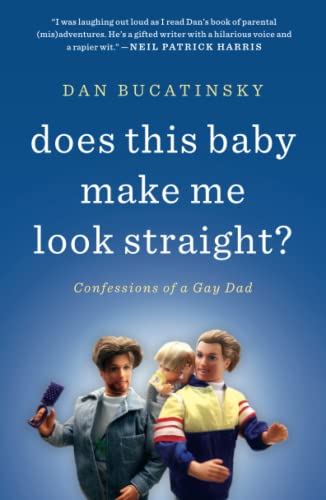 “Dan Bucatinsky . . . writes like a master storyteller—one whom we hope has many other stories to tell.”

“I recall the promise I made to myself when we decided to have kids, that no everything in our lives would change. I particularly didn’t want to become one of those parents whose house transforms into a receptacle for plastic toys, bubble wands, big-wheel tricycles, and giant, colorful play kitchens that eat up huge corners of space.

“I didn’t want to be one of those parents who stopped going out, seeing friends, and having one-on-one time with their spouses beyond the marathons of bad reality TV after the kids have fallen asleep. I didn’t want to become that guy who no longer had regular sex with his spouse because he was so damn tired and so instead lived vicariously through the stories told to him by friends without kids.

“I think you can guess what happened.”

Dan Bucatinsky’s book, Does this Baby Make Me Look Straight? is all about what happened next.

Mr. Bucatinsky is both an actor and writer in Hollywood, married to director Don Roos, and producing partner with actress Lisa Kudrow on such shows as “Web Therapy” and “The Comeback.”

As such it would seem that he was living the perfect life, one that included, as the “Beverly Hillbillies” theme song informs us, “swimming pools, movie stars.”

And yet, what was lacking was perhaps the most fundamental element of a family: children. Does This Baby Make Me Look Straight? is Dan Bucatinsky’s account of what it took for Roos and himself to adopt two babies, Eliza and Jonah, through the process of open adoption from the same birth mother.

And in the same mold of Dan Savage’s The Kid and The Commitment, the real story only starts when the adoption is finalized, as the book presents a clear, concise, and comic picture of family life with two fathers, Daddy (Bucatinsky) and Papi (Roos).

Anecdotes abound. There are the tales of baby poop, three-legged dogs whose kennel attendant overuses the word “adoption” as a last chance option, upsetting the adopted parent and unsettling the adopted children. There are stories about heterosexual parenting —lots of alcohol seems to be involved. And then there are the nd birth mothers; apparently of the two major groups who are most likely to agree to adoption—unwed teens and careless strippers—strippers are the better bet.

What is never quite clear is the why of the book. What is its purpose on my bookshelf?

It is a pleasant enough work—Mr. Butcantinsky, veteran film and television writer that he is, presents a narrative—choppy though it is—that is intelligent, comic, and moving all at the appropriate times, and yet he seems to have not made up his mind whether he is writing a memoir, a how-to book, or a work of gentle, even loving propaganda if such a thing is possible.

It must be remembered that Mr. Butcantinsky is writing both from and about Los Angeles, and so as he and his same-sex partner raise their two adopted children, cultural and religious issues that might be pertinent in some of our redder states are all but absent here.

Indeed, both seemingly can be summed up when Mr. Butcantinsky, a Jewish man, partnered with Mr. Roos, a present-day atheist from a Christian tradition have to decide what to do about Christmas:

“When I was a kid, I tried to contain my enthusiasm and sell the Chanukah bush idea to my parents with a minimalist design, only silver and blue balls, white lights, and a simple Star of David on top. But once I married a goy I went hog wild (I know, not kosher) with the multi-colored lights, elaborate ornaments, and inflatable Santas in every window!

“There is nothing quite like the fervor of a Jew celebrating Christmas. We get to throw all our neurotic and obsessive attention to detail into a holiday that was kept from us as kids. And now with small kids, I get right in there with the Santa hat, the plate of cookies for him, the caroling, and the stockings hung by the chimney with care.”

In other words, it is not as if the Westboro Baptist Church is holding up “God Hates Fags” signs on the front lawn.

Much of content of Does This Baby Make Me Look Straight? (title included) seems to have been lifted from an episode of “Modern Family.” One chapter’s problem is the need for little Eliza to go potty while her father is buying a patio umbrella, flirting with a cute salesclerk, and worrying about the groceries in the car parked out in the summer heat. Another chapter focuses on a bird’s nest that appears in the roofline of the garage and the question of whether it has any eggs in it.

[SPOILER ALERT] The nest is ultimately found to contain two newly hatched birds shown to the children from a safe distance so the nest is left unmolested.

Indeed, all too much of the book’s dialogue reads as if it were being written in a half-hour comic television format:

“Don grumbles, ‘Doesn’t strike me as a problem we can solve in the middle of the night . . .’

“’Well, let’s just hope they don’t.’ And he turns back to sleep.

“’Boyfriend? I wish! If I were just your boyfriend, I’d be sleeping through the night. I’d be younger, thinner, and I wouldn’t be wondering if I’d already ruined our kids with my anxiety. If I’d somehow planted the seed for them to grow into meth whore junkies. Do you think I have, Don? Seriously. Do you think it’s too late?’

Luckily, Mr. Bucatinsky does not leave his readers with only such sweet and facile stuff. His book also delves into his own family history, his relationship with his parents, and the chapter that he dedicates to his father comes at the reader straight on. It is moving, endearing, and beautifully written.

Even better—the best part of the book: a candid, unique, and rather amazing look at the unique dynamic between a gay adoptive father and a straight adopted son—is the chapter entitled Bam Bam:

“Seeing Jonah, all three feet, forty-five pounds of him, with his little tough guy swagger, I am often transported back to the terror and panic of junior high school. The strident squeaks of kid’s sneakers running toward class, and the slamming of lockers. And the slamming of me inside those lockers. I still carry a lot of anxiety and insecurity from those days.”

That Mr. Bucatinsky admits to his anxiety, exploring and writing about it, and the fact that even his very young son is capable of triggering a fear response within him by the virtue of his strut alone is both a brave and remarkable discovery. That he writes about the odd dynamic between himself and his son so well, creating as vivid and honest a picture as he does is highly praiseworthy.

In moments such as this as well as the telling of his young daughter’s health crisis and the roller coaster of emotions that he and his partner faced during the adoption process, Dan Bucatinsky transcends his own easy access to sitcom patter (set up, joke, set up, joke, capper punch line, fade to black) and writes like a master storyteller—one whom we hope has many other stories to tell.