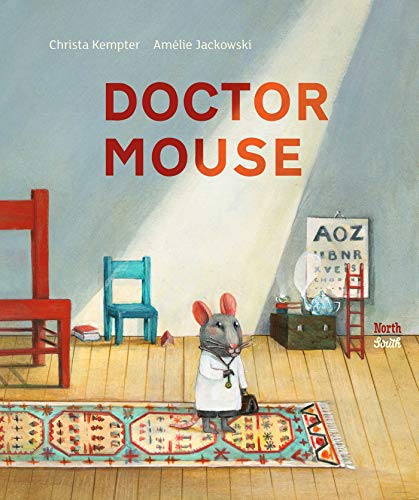 “The illustrator tries hard to make up for the text’s plodding quality with winsome details and colorful characters.”

Doctor Mouse is a story about patients healing themselves and each other, rather than the doctor providing any real help. For some, the way the patients interact will be charming. Others may feel simply annoyed by the doctor’s know-it-all attitude combined with absolute uselessness. Clearly the author meant the story to be about fun problem-solving, but the text is overly long, the language awkward (partly the fault of the translation, possibly, but a good editor could have stepped in to smooth out the lumps). “He then straightened up the six chairs, put on his white coat, laid three cushions on a wobbly armchair, and sat down on the top one. This enabled his patients to see him.” I had to read this sentence several times, wondering if the cushions allowed the visits to start, so patients could “see” the doctor, (why would cushions mark when the office was officially open?) then realized the writer probably meant Doctor Mouse needed the height of the three cushions to be visible at all. Which, given that he’s illustrated to be the same size as the chicken and rabbit who have come to his practice, seems unnecessary.

The illustrator tries hard to make up for the text’s plodding quality with winsome details and colorful characters, but the pictures can’t save the story from dragging. The wordiness and confusion continues as the doctor sends each new arrival to differently numbered chairs, Chair number one or two or three, etc. But there are no numbers actually on the chairs. How would anyone know which chair was which number? And why does it matter? Clearly the biggest chair should be for the biggest animal, the bear, which is how it works in the pictures. Chairs are sat in by size, not by number or any kind of order on the page, another muddling factor. Then there’s the doctor’s insistence that nobody can be cared for until all six chairs are filled, a meaningless rule that would surely infuriate any patient in real life, but makes sense once you realize the lazy doctor is using the other patients to solve each case as it’s presented to him.

The biggest unresolved factor however is the last patient, the fox. Each patient before is conveniently paired off with another, so that they solve each other’s problems. But the fox strolls in simply to show off the contents of his backpack: “an alarm clock, a sun hat, a glove, and a pair of spectacles.” The glasses turn out to be just what Owl needs. But what about Fox? And why all the odd objects? Did he (because it’s Mr. Fox) eat someone? What problem has he had solved, other than having Owl now be very grateful to him.

The book ends much as it began, in wordy fashion: “It would be some time before the sun set behind the forest. But if no more patients came, Doctor Mouse would simply be able to go on sleeping. After all, tomorrow was sure to be another busy day.” Parents reading this book to a young child will surely find themselves skipping sentences or inventing their own story to go with the pictures. They may even change up the genders—the bear, fox, dog, and doctor could be female, the owl, rabbit, and chicken could be male (now a rooster). That could add some spice to a bland text.