Do You Mind If I Cancel?: (Things That Still Annoy Me) 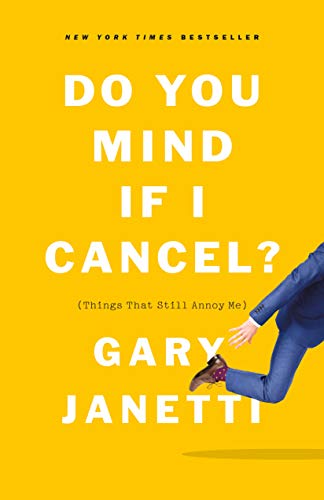 “Do You Mind If I Cancel is packed with funny lines, wistful memories, and the kinds of coming of age experiences we all have. A great read no matter what mood you’re in.”

There are sections in Gary Janetti’s that are so funny, one needs to put the book down and just laugh out loud. This is particularly embarrassing on the subway, but it is good advertising for the book.

On Janetti’s first day on the job, the manager warns him not “under no circumstances to eat any of the food off of the customer’s plates.” Janetti’s younger self is outraged, appalled at the thought and wonders, “What kind of animal eats off a stranger’s plate in a restaurant?”

As you can probably guess, it takes a stressed-out newbie waiter like Janetti about a hot minute to begin what is referred to as “garbage mouthing.”

After some seven hours of being around food but never getting a break to eat, Janetti begins sizing up the customers who look clean and who are not touching the fries on their plates. He writes: “I’d go through the swinging doors into the kitchen, hunch over the trash can and begin shoveling the uneaten food into my mouth as fast as I could. When the door would once again swing open I’d look up, frozen in fear, with half a baked potato sticking out of my mouth and when I’d see it was just another waiter I’d resume my pose over the trash can and continue frantically shoveling it down my throat. Raccoons had more dignity than I did.”

This slight book of essays does nearly as good a job as any memoir would, although one does thirst for the breakthrough moment. Janetti is a well-known TV writer and the book is filled with many self-deprecating essays but never the one when he finally figures out that he can make a living out of writing funny.

It’s too bad because the rest of his adventures are amusing indeed. The essays are not in chronological order, but that’s no problem because each of them is self-contained. One moment he’s talking about his imaginary time in the Peace Corps where he is surrounded by young handsome, selfless men like himself sipping a drink at sunset and pining about the poor natives they are helping. Few people want to join the Peace Corps for the dates, right? The idea that Janetti must give a two-year commitment when he’s 22 years old sends him running in the opposite direction, and it’s a good thing because it gives him a chance to work at many jobs he finds as ridiculous as being a waiter at Bennigan’s.

Then there are essays about his first job at 16 years old when he becomes a cashier at Waldbaum’s (after being denied a job at McDonald’s even though he’s a “legacy” because his sister worked there) and begins giving discounts to anyone he likes. He rarely charges anyone for everything. As he says often, it was a different time. There were not cameras everywhere, everyone smoked, and no one cared. “I saw myself as a kind of Robin Hood of Flushing,” he writes.

Many of the essays are about the younger Janetti coming to terms with being gay. While hilarious, they are often poignant, such as his letter to his younger self when his advice could pretty much apply to anyone, anywhere, “Don’t go into debt over clothes. Hug your dogs while you have them. Know that you can skip most anything. You will fall in love eventually. Remember that.”

Do You Mind If I Cancel is packed with funny lines, wistful memories, and the kinds of coming of age experiences we all have. A great read no matter what mood you’re in.