Do Morals Matter?: Presidents and Foreign Policy from FDR to Trump 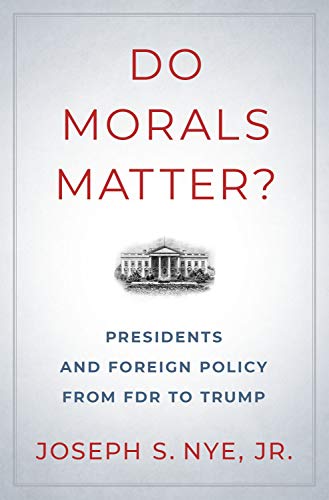 “Joseph S. Nye, Jr served the presidencies of Jimmy Carter, Bill Clinton, and Barack Obama, and his effort in this book to present an objective scorecard of the foreign policies of every president from FDR to Donald Trump based on a scientific typology fails for that reason and for others.”

Ranking the performance of U.S. Presidents is not a science, and those who do the ranking usually bring their own personal biases with them to the task. Joseph S. Nye, Jr served the presidencies of Jimmy Carter, Bill Clinton, and Barack Obama, and his effort in this book to present an objective scorecard of the foreign policies of every president from FDR to Donald Trump based on a scientific typology fails for that reason and for others.

Nye’s Do Morals Matter? is reminiscent of political scientist James David Barber’s book The Presidential Character, which employed a supposedly objective typology (“active-positive,” “passive-positive,” “active-negative,” and “passive-negative”) to rank the character of presidents. The liberal professor Barber claimed that “active-positive” presidents were the best and placed FDR, Truman, Kennedy, and Carter in that category.

The liberal Barber favored liberal presidents—there was nothing objective about it. The same is true for Nye’s book. He favors liberal presidents—especially the ones he worked for. There is nothing wrong with that, except when you pretend to use an “objective” typology to grade the presidents.

Nye’s typology uses three main categories: intentions and motives (moral vision and prudence); means (necessity, proportion, and discrimination in using force and a liberal respect for rights and institutions); and consequences (success for long-term U.S. interests, minimal damage to others, and truthful moral discourse). He assigns each president grades of poor, mixed, or good in each category.

Nye is probably best known for his advocacy of what he calls “soft power,” which is the ability to attract and coopt rather than coerce foreign leaders and foreign powers to do what we want them to do. Soft power is essentially non-coercive power based on culture, ideology, and institutions. Nye favors liberal presidents who use soft power instead of hard power (military force, deterrence, intimidation, and economic pressure).

There is nothing scientific or objective to Nye’s typology. Harry Truman’s Asia policy was a disaster, but Nye focuses on the successes in Europe, which were substantial. Bill Clinton did little or nothing as the fundamentalist Islamic threat grew throughout the 1990s, but he championed soft power. Obama ‘s “reset” with Russia was a failure, and his “pivot” to Asia was mostly rhetorical, but his preference for multilateralism in foreign policy matches Nye’s. And Nye’s praise of Jimmy Carter’s foreign policy can be attributed to loyalty (a worthy trait) and an overemphasis on good intentions.

Nye predictably gives Soviet leader Mikhail Gorbachev far more credit than President Reagan for ending the Cold War. Reagan, Nye believes, was lucky that Gorbachev came to power in the USSR when he did. Nye simply ignores the recent (and not so recent) scholarship that shows that Reagan and his foreign policy team set out to undermine Soviet power and were successful. It was, after all, the liberal scholar John Patrick Diggins who credited Reagan with being one of the three great liberating presidents (along with Lincoln and FDR).

And then there is Nye’s grading of Richard Nixon. Nixon was the president most hated by liberals until Trump’s victory in 2016. Nixon’s foreign policy record easily surpasses that of Carter, Clinton, and Obama, but Watergate and Vietnam cloud the assessments of many observers, including Nye. Nixon’s opening to China by itself—a geopolitical masterstroke that helped set the stage for the West’s victory in the Cold War—places him in the top rank of foreign policy presidents.

Nye overrates Ford and George H. W. Bush, somewhat underrates Eisenhower, and fails to give enough credit to George W. Bush for preventing a second 9/11 from occurring, though he rightly criticizes Bush 43 for his failed Wilsonian Middle East policy.

In the book’s final chapter, Nye acknowledges that his grades for Carter, Clinton, and Obama “may have been unwittingly affected by [his] participation in those administrations.” He notes further that it is important for readers of the book “to be aware of [his] potential biases.” And he writes that his personal rankings of presidents are less important than his typology “which readers can alter for themselves.”

But the typology is infused with his biases and preferences. Nye prefers “soft power” to “hard power” and he grades presidents accordingly. The only objective aspect of his presidential scorecard is the category of “consequences.” Presidents and all statesmen should be judged by the consequences, not the intentions, of their policies.

Nye’s answer to the question posed by the book’s title is that morality matters in foreign policy, but it must be judged in the context of intentions and motives, means, and consequences. But in the end, what matters most is consequences.