Do This For Me: A Novel 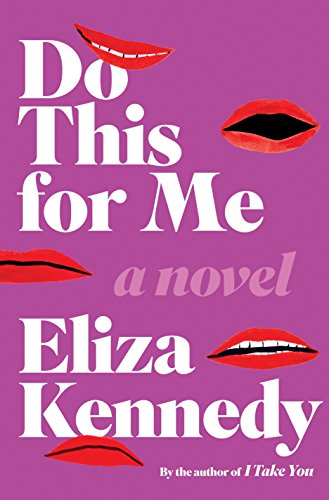 Raney Moore is no slacker. The morning after discovering that her seemingly wonderful husband Aaron has had an affair, she unleashes the hounds of hell on him. He’s the environment movement’s newest hero—a renowned entomologist, bestselling author, TV personality and climate change activist—so she hacks into his social media accounts and diabolically impersonates him on Twitter.

Gleefully tweeting diatribes (in his name) about the “fake media’s pernicious lies about so-called man-made climate change” she also donates large amounts of money (also in his name) to three top climate change denying organizations. The perils of climate change be damned, hell hath no fury like Raney pissed off, and she’s out to tank this adulterer’s career.

As if that isn’t enough on this second worse day of her life, before the dust has even thought of settling, she also cancels all credit cards, phones, insurance, and utilities (most people would have spent the entire day on hold with just the electric company!), looks into hiring a divorce lawyer and hires a moving company, cancels her evil husband’s flight home (he’s on a book tour), tows his car and hires a bunch of clowns (yes, actual clowns) to greet him at the airport when he somehow manages to make it home. Oh yeah, given that she’s a highly successful lawyer at a big New York City law firm she also wins a major legal case with national ramifications. All of this by three in the afternoon, just in time to pick up her twin daughters at school and move all three of them to her childhood home in Brooklyn. Whew! Talk about a go-getter!

So what to do on day two? Awfully hard to follow up that day one act, huh? Well, the rest of the book is just that: Raney figuring out how things could possibly have gone so terribly wrong with her relationship and her life and what the heck she is going to do about it.

“I thought I was smart but I was clueless. I thought I was in control but I was a mess.” What was her relationship with her husband all about anyway? What boundaries should she set with other lawyers and paralegals in her firm? What should she do with that persistently flirtatious client of hers? What should she tell her daughters, her friends, her therapist? What role should she take to combat sexism in the workplace? And, oh my God, what’s up with this this whole female orgasm thing?

Who is Raney Moore? Can she “embrace the mess” and move on or is she forever doomed to have her life continually spiral out of control?

Do This for Me, former lawyer Eliza Kennedy’s second novel, is a quick moving, heavy on the dialogue, beach read. There are few things more enjoyable than sitting on the sand with the waves crashing and a good page-turning non-literary book in your lap.

Mostly meant to be humorous, the book does touch on larger issues—toxic workplace culture, infidelity, sexism, indigents’ legal rights—and certainly paints an unflattering picture of the legal profession. How wonderful are novels that make you think? Novels that make you laugh?

Sadly, Do This for Me does none of that. The humor felt painfully, awkwardly, cringe-worthy flat, and the difficult larger issues seemed contrived and forced. For those readers with OCD (Obsessive Climate Disorder), Raney’s eagerness to sabotage a renowned climate scientist’s life work in order to punish him for his infidelity will not sit well. The revenge humor wasn’t funny in the least—just psycho disturbing—and immediately made the main character Raney exceedingly dislikeable from the get-go. Yeah her husband’s a jerk (a one-dimensional whiny jerk), yeah he needs to have his comeuppance, but seriously, do you really have to take climate science down with him? And what was a high-powered New York City lawyer ever doing with Bug Boy in the first place?

And the sexcapades? Oh. My. God. Granted, it is a novelist’s prerogative to get their readers to suspend belief but seriously, when Raney goes pedal-to-the-metal on her sex splurge in her luxurious rented sex pad it was like WTF? Are we missing something here? This is so not funny. Or revealing. Just disturbing. And her sudden transformative interest in toxic workplace culture and the endemic sexism in the legal profession? Say what? These are huge issues and novelists need to tackle them in an insightful way and yeah, humor can play a key role in doing that, but wow, her approach sure didn’t work.

Evidently Do This for Me is on track to become a major motion picture for Imagine Entertainment. If that actually happens, we’ll assume Imagine imagines that the movie will be a heck of a lot better than the book. Good luck with that.