DNA: The Story of the Genetic Revolution 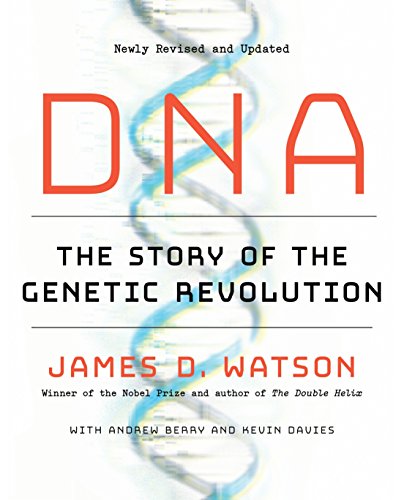 DNA: The Story of the Genetic Revolution is described in the Authors’ Note as an “unabashedly personal view both of the history and the issues.” The co-authors also stress that book represents “JDW’s personal view and is accordingly written in the first person.” One can speculate that Messrs. Berry and Davies might not fully endorse all the views expressed on sexuality, gender, and race, or indeed the more controversial aspects of gene therapy.

The following sentence gives a good sense of the JDW swash-buckling style, convictions, and general approach “Compared to almost any other object that starts with D, DNA is very safe indeed. Far better to worry about daggers, dynamite, dogs, dieldriin, dioxin, or drunken drivers . . .” than to worry about how “laboratory-made DNA will lead to the extinction of the human race.”

The Authors also claim that “We have tried to write for a general audience, intending that someone with zero biological knowledge should be able to understand the book’s every word.” The nicest construction that can be put on this statement is that they have never met a “general audience.”

It would anyway have been difficult to provide biology basics along with all the other interesting fish Dr Watson has to fry: the progress and setbacks of high-end genetics research; the fierce rivalries between different institutions and individual scientists; the tensions with the legal system over patenting of “discoveries” such as the breast cancer gene; the role of the pharmaceutical industries, and the right of individuals to knowledge of their own genome without the mediation of the medical profession.

Even readers with a spurious mastery of the required vocabulary will not find DNA an easy read, and will find themselves reaching for the many online sources of basic information, a moderate grasp of which is critical to understanding the DNA story.

Sometimes Watson tries to help us catch up, typically by a very charged parenthesis: “Once we became aware of the general nature of genes in the eukaryotes (organisms whose cells contain a compartment, the nucleus, specialized for storing the genetic material; prokaryotes, such as bacteria, lack nuclei), a scientific gold rush was launched.” Or with a typical admonition and a parenthesis “(Remember, that most enzymes cut DNA only when they encounter a specific palindromic sequence. If a letter in that site is altered the enzyme will no longer be able to cleave)”.

Often enlightenment comes in passing, and very late as we read in a passage from the late John Diamond (“the first husband of celebrity chef, Nigella Lawson”) that “By the time you hit forty your thirty trillion or so cells have each divided a couple of thousand times . . .”

The reader’s own limitations are compounded not only by the fact that this is an inherently difficult topic, but also by the fact that it is still very much work in progress. The correct subtitle for this work would in fact be the Story of the Genetic Revolution . . . So Far. The aspiring general audience deserves more help.

The admittedly very long Index (pages 459–487) does not live up to its billing. Without talking down the authors could have tactfully reminded us of the centrality of some key processes such as cell division and provided more and clearer diagrams, possibly drawn by a non-scientist. A detailed Glossary of Key Terms—germ cell/somatic cell; autosome/allosome, for example—would have been appreciated as would a timeline of who discovered what and when.

Reservations aside, is this difficult read worth the effort for the general or even slightly above “general” reader? To imitate JDW’s parenthetic style (It is anyway doubtful whether someone with no previous brush with the subject would pick up a 487-page book of this title).

On balance a large investment of time and effort brings rewards as the reader learns and un-learns a number of what are currently considered to be facts. It is comforting to learn that JDW finds it “rather humbling that we still cannot say precisely how many genes reside in the human genome more than a decade after the Human Genome Project.” And that the human genome is not as “gene-rich” as the standard textbook estimate of 100,000 genes with which we might be familiar.

The current estimate of the human gene count is 21,000, almost the same gene tally as the lowly worm and fewer than the “weedy little (mustard) plant.” We learn also that an approximate 98% of our genome is made up not of genes but of “repetitive junk-like sequences of no apparent function.” And perhaps the most revelatory, that “ the most humbling aspect of HGP (Human Genome Project) so far has been the realization that we know remarkably little about what the vast majority of human genes do “. . . even with the entire human genome in hand the program and cues according to which its instructions are carried out remain a mystery.”

Ranging from Mendel (1822–84) and his peas to gene-editing through CRISPR (Clustered Regularly Interspersed Palindromic Repeats) Watson provides data and opinions on eugenics (“racism is not inherent in eugenics though its most prominent practitioners tended to be racist”); the 1953 Crick and Watson discovery “without doing experiments” of the double helix structure of DNA; genetically modified food (“Tempest in a Cereal Box”); the announcement of the first draft of the Human Genome Project (HGP) in 2000, though at the time only the sequencing of two of the smallest chromosomes, 21 and 22 was reasonably complete; and “HGP was a mosaic genome made up of bits and pieces from 20 volunteers who had answered an ad in newspaper. He remarks somewhat randomly that “there may be a substantial African-American contribution.”

The fact that sections have been revised and inserted makes sometimes for a bumpy and repetitive ride. One of the most successful chapters is on DNA finger-printing (Genetic Finger-Printing: DNA’s Day in Court) where he reflects on a range of issues and usages from the O.J Simpson trial where he states that the celebrity was acquitted on grounds of clumsy handling of DNA evidence by the police; through paternity testing of Mick Jagger and Boris Becker; to the confirmation that the bones discovered in a Leicester car park were indeed Richard III.

Another very cogent and powerful chapter is Disease Genes: Hunting and Treating Human Disease, an application of scientific knowledge that he regards as the most significant breakthrough so far, though in a characteristic aside he notes that “it pains me to say it but, genetic insight may not help us as much as we had hoped in our understanding of the biology of diseases”!

Watson also acknowledges that genetics does not yet allow us to ascribe to particular genes intelligence levels, behaviors and propensities (e.g. schizophrenia, alcoholism, violence), “we are as yet in the early days of our attempts to understand the genetic underpinnings of our behaviour, both that which we all have in common and that which sets us apart one person from another.”

At the same time those feminists should realize that girls just don’t do math. “Among some unregenerate hardliners of the women’s movement, for example, the notion of biological—genetic—differences in cognitive aptitudes between the sexes is simply unspeakable: men and women are equally capable of learning any task, period.”

In fact Watson ignores almost totally current popular debate on sexuality and gender issues with the exception of one mention of a failed 1993 attempt to match “a particular region on the X chromosome with being gay.” Nevertheless he is convinced that “We will indeed eventually identify some genetic factors that predispose us to our respective sexual orientations.” Elsewhere he has appeared to indicate that the identifying the gene or genes for skin color is a work in progress.

As he appears not really to have thought through what he wants to say about gender and sexuality, his assorted statements on genetics and race seem confused. This again may be a function of the revision and updating process. Rather positively he notes that “Genetically human beings are 99.9% alike” exhibiting much less variation than other species; and “another counterintuitive finding about human variation, what little there may be, is that it does not correlate, for the most part, with race . . . race-specific genetic differences tend to be very limited and one is as likely to find a particular genetic variant in an African population as in a European one. One is left to surmise that much of the genetic variation in our species arose in Africa before the out-of Africa event and so was already present in the groups that went forth to colonize the rest of the world.”

However he also speculates about the links between genetics, race, and intelligence: “I do not believe that the people of continental Africa are somehow genetically inferior, but nor do I think that political sensitivities should preclude us from researching the genetics of traits in an objective fashion.” And he castigates scientists for being overly politically correct and neglecting to research the link between skin color and race.

By the end of the book he proposes that “our DNA, the instruction book of human creation, may well come to rival religious scripture as the keeper of truth” explaining both physiological and behavioural traits.

Although he acknowledges that there is a great deal about our genes that we still do not know, Watson deplores the fact that we are not currently taking advantage of the knowledge we have either because of (his favorite bug-bear) political correctness, or religious scruples.

He makes an impassioned plea for the many biologists who share his opinion to give serious consideration to germ-line therapy and not to be intimidated by the “designer babies” arguments; and to recognize the enormous benefits gene therapy makes possible in addressing or eliminating “deleterious genetic mutations” (e.g. Tay-Sachs syndrome). He expresses his irritation at the assumption made by religious people that they have a monopoly on moral authority. And as an atheist he feels that he has a moral obligation to use the knowledge that we have for the good of humanity.

Watson has been at the center of genetics action for decades and was the first person to have his genome sequenced though he did not want to know about the gene or genes on chromosome 19 associated with the heightened risk for Altzheimer’s. His voice is authoritative and inspiring but also consciously provocative. These characteristic features could have been retained and indeed become more accessible with much tighter structure and editing throughout.