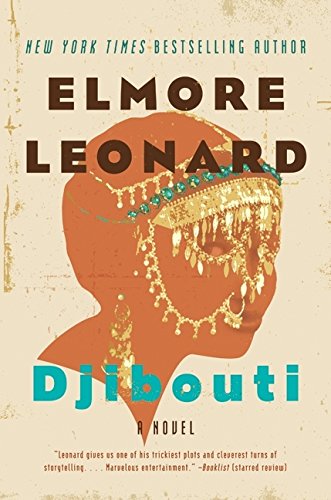 It also serves up everything you’d expect from a big-budget action flick. Which is hardly surprising, because Leonard’s writing consistently engages with the movie world. Here, the pacing, structure, references, dialogue, characterization, and above all else the action are so visceral it is like watching a film on the page.

This is a novel that fizzes and pops, explodes with energy. It’s a novel that arrives with fanfare: the epic-level promotional materials accompanying the book almost acting as a red carpet at a film premiere. This is the novel as event, just as attending the movie theater is an event. This is the work of a master American auteur, the work of a man who clearly loves, and takes pride in, his writing. Leonard, who celebrates his 85th birthday the day before the novel’s release, positively bursts with delight as he invites us in to his world.

Djibouti is a major port on the horn of Africa. “Like Singapore,” only not like Singapore. Leonard’s Djibouti is a Wild West of a place, virtually lawless. A place of extreme poverty and extreme wealth. It’s a “‘nasty place. Hot, full of open sewers, has rats, dirty kinds of bugs, like that beetle rolls up bat shit bigger ’n he is?’” A place populated by Leonard’s usual array of wonderfully drawn, often twisted characters. A place where modern-day pirates rub shoulders with religious extremists, with al Qaeda gunmen, with French soldiers, with dancing girls, with gangsters. It is not so much a melting pot as a casserole (the literal meaning of Djibouti is “my casserole”). And Leonard stirs the reader right into it, allowing us our usual VIP seats as we go through the looking glass into an underworld that we hope we may never enter in real life. The darker side of the street.

He introduces us to Dara Barr, an Oscar-winning documentary maker (her job is to “shoot faces,” but not in the style of your archetypal Leonard character) and her cameraman/assistant/bodyguard, Xavier Bo. These two principal actors are both hugely well drawn by Leonard. They appear exaggerated, fighting their way off the page and into your head. You hear them speak. And yet Leonard never “waste(s) time with backstories. What you see is what happened.

The characters are revealed by what they say, how they act. (Later, when Dara and Xavier discuss how they can insert a backstory for one of the main characters in their narrative, Xavier supplies a suitably Leonard-esque answer: “‘Went over to Djibouti and got into jihads for al Qaeda. He can tell it in two lines.’“) It’s easy to confuse Leonard’s brickbat, all-action narratives as lacking subtlety, but nothing could be further from the truth. He manages to categorize the closeness of Dara and Xavier’s relationship in less than two lines. All he needs to say is Dara knows “his bathroom smell.”

This dryly amusing, dynamic duo are in Djibouti to make a film about modern-day pirates, the ones who have been all over the news in the past few years for hijacking tankers and demanding huge ransoms. Much of the early action in the book is reportage. It’s Dara and Xavier discussing how to cut the film of the action they’ve already seen: “‘I remember we went aboard,’ Xavier said, ‘we’re told we could speak to the crew all we wanted. . . . Idris said he’d tell the pirates aboard to duck if they saw me aimin the camera at them. Meanwhile you shootin away with your tiny spy pen while Idris watchin me with the Sony.’“ It’s them: “‘trying to find a movie in all the footage we’ve shot’“ while out on the high seas pirate hunting. And although this section of the novel seems weaker than the rest, because it does not feature direct action, it does introduce one of the key themes of the novel: that of artistic intention and artistic truth. For this is not just a Jolly Roger pirate story, it is a novel exploring the creative process in full.

Leonard has always set his stall out as a stripped-back, hard-boiled writer. A writer determined to “lose the poetic fucking around” and stick to the story. In Dara and Xavier there is a conflict between trying to make a documentary (and good documentaries “always reveal the truth”) and a feature film in which that truth is embroidered (and if the truth isn’t available, one can always “make up stuff we don’t have.”) This conflict is played out in a variety of ways: Xavier’s insistence that in many movies “What should be the real part ain’t even real;” Harry’s asking: “Did you know you were making a thriller?”

When Dara edits the film footage, she is “still not sure what the documentary was about, she had a feeling she could make it work. It was alive, it was about what was going on right now in the Middle East. She would look at the footage with Xavier and hear his ideas, what he thought could be the theme.” Her challenge, like Leonard’s, is to construct the truth into narrative truth. Styling it into a familiar beginning, middle and end: “‘Beginning, the pirates; middle, Djibouti stuff; maybe end it on the island, the ship burnin.’“

And the key part of the challenge is to do this without losing that integrity which is at the core of the writing. Something that is clearly an impossibility. Because the director, the author of the film, directs us as to where our sympathies should lie, even if this is done unconsciously. The director is still present, still the star of their own movie, like Leonard is the star of this book (and like Dara may later become the star of her own film). But, cleverly, Leonard makes his filmmakers aware of this fact. For example here is an exchange between Dara and Xavier: “‘I’ll say the Somali rights activists have been thwarted in their attempt to seize the Polaris and levy a fine. Cut to the cruiser’s Seahawk helicopter firing at them. Or I might call it the cruiser’s gunship.’

‘I like ‘thwarted’,’ Xavier said. ‘You make the cruiser the bad guy.

The protagonists are fully conscious they have taken sides, judged the truth, and made the pirates the good guys: “‘Look,’ Dara said, ‘As long as the pirates were underdogs and behaved themselves, didn’t shoot anybody, they’re the good guys. All they’re doing is getting back at the shipping companies, and ‘getting back’ seems acceptable in their world.’“ The ironic thing is, if there is a film made of Djibouti, something which you’d bet a decent helping of khat on, it is likely this artistic truth which will be the first thing to go.

The remainder of the novel is all-out action too, as the narrative starts to focus more and more on the figure of Billy Wynn, an eccentric billionaire who wants to be the hero of the book (and Dara’s film). Billy believes he has uncovered an al Qaeda plot to blow up a huge LNG ship outside Djibouti and also believes he is the man to stop it (with his 600-caliber elephant gun).

Dara and Xavier sense the tide turning, this second story taking precedence over the original pirate material: “‘Hollywood makes it, they have the pirates look ’em over, leerin at them, jihad boners in their pants. You gonna do this movie you don’t have to change nothin’. You already in it and you sense where it’s goin. You say the pirate movie about pirates is over. By Sunday they showin a sign they want to kill us. Mr. Billy Wynn comes along with his elephant gun and saves our asses from their ire. Mr. Billy Wynn knows what he’s doin. Keep him in our sight and you have your movie.’” Which is exactly what Leonard does. With all the resulting mayhem and explosives.

To carry the film metaphor further, Leonard writes in a filmic way: “She liked the rhythm of the edit: pirate skiffs getting a beat going with quick cuts to faces she thought of as rimshots coming in a flow of action and gone.” For him, it is all about the image, not the words used: “A woman came rushing from the entrance and he shot her. A woman with smoke rising from her burka.” Or, “Jama rolled out of bed in his Levis and sneakers, the way he always slept, and brought out his Walther from under the sheet. He shoved four 9-mm magazines into his jeans from the night table. Slipped a shirt on over his head and picked up his flight bag from the foot of the bed. He was in the living room when they banged on the door again. Jama sure there’d be a few of them in the hall packing Aks or Uzis, al Qaeda deadheads serving the contract on him.”

Not only are there a veritable movie database of film references (Dr. Strangelove and The Wind and the Lion, to name just two examples), this is a novel about the film-making (and writing) process, about the search for narrative truth, and about the quest to do away with purple prose and the “made up stuff.”

Leonard's filmography includes Get Shorty, Stick, 3:10 to Yuma, Jackie Brown, Out of Sight, and many more. The filmic conversation in this rip-roaring novel is no accident.

Which isn’t to say the whole thing isn’t a great deal of fun. Near the beginning of the book, Billy Wynn says to Dara, “You can sure get people to talk in your movies. I admire that.” Leonard doesn’t just make his characters talk, he makes them sing.