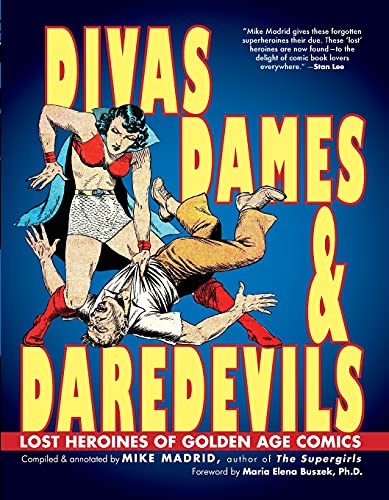 “. . . an interesting and accessible take on comics’ place in literature, popular culture, and women’s history.”

The Golden Age of Comic Books was a groundbreaking era for authors and illustrators. Generally classified as lasting from the late 1930s through the early 1950s, the era would be better defined by a more definitive end date of 1954, which was marked by the publication of Frederic Wertham’s scathing indictment of the comics industry Seduction of the Innocent. By 1960, the number of publishers remaining had been whittled down from over 50 to only nine.

While it is agreed that the greatest contribution to popular culture from the Golden Age is the concept of a superhero, there was also a new vision of modern femininity born that has, sadly, been greatly underanalyzed.

With the rise of World War II, the role of women in society was drastically altered. Once relegated to domestic duties, women began entering the workforce in record numbers to support their country’s call to arms. As women took on more and more responsibilities outside the home, in positions once deemed unseemly for the gentler sex, entertainment needed to also adjust its content to reflect this new modern woman. Women were no longer viewed only as mothers and wives, they were now crack reporters, determined private investigators, and idealistic litigators.

In comics, female characters had also been relegated to traditional supporting roles. But with the changing times, more and more stories featured a female driven storyline.

As author Madrid breaks it down, women lead characters fell into one of several tropes. There were the women at war: brave women using military might to topple the evil Axis powers. They were war nurses, reporters, domestic spy hunters, and canteen girls. The embodiment of the America our boys were fighting for, these strong red-blooded women were not sitting on the sidelines allowing atrocities to occur under their noses without fighting back.

But not all comics were war comics. One of the best selling genres was the pulp comics, featuring hardboiled plots filled with action and adventure and none of the annoying existential introspection. We are introduced to Ginny Spears, legal secretary by day but the feared bullwhip wielding Veiled Avenger come evening. We also meet Peggy Allen, the mysterious Woman in Red, who is regarded as the first masked female crime fighter in her 1940 debut. These mystery women were not afraid of violence, in many instances courting it directly.

But not all women take on the mantle of freedom fighters. Some women are born to be goddesses and warrior queens. Here we see the rise of Fantomah: Mystery Woman of the Jungle, The Sorceress of Zoom, Marga the Panther Woman, and Diana the Huntress. In darkest Africa and the Steamy Amazon, these women revealed the more aggressive nature of women. These were women that were not going to be curtailed by men, and bristled at the expectations laid on them by society. With teeth and claws out, they fought for what was theirs by right.

It should be said that the best selling comics of the Golden Age were the non-superhero comic books. There were many genres on the market including Westerns, romance, science fiction, and humor comics. Dell Comics, with their licensed properties including Mickey Mouse, Tarzan, and Roy Rogers, outsold them all.

It is also important to note that though there were decidedly more men that read comics, women read them, too. Many followed the progression from Donald Duck strips in the funny pages to teenage adventures with Roy Rogers and Dale Evans. But where to go from there, was a question that continually popped for women comic fans.

The comics featured letter columns that usually contained at least one from a young girl imploring the publishers to write more stories “for me.” For me would always be translated to more female characters, but the portrayals were not always hitting the mark for their readership. Today we still hear the cry, “Comics are for girls too!” but we still see a lack of female lead series from the big two publishers, Marvel and DC, and a distinct lack of female participation creatively across the board.

Mike Madrid has opened Pandora’s Box, but one hopes he is not done examining the contents. Divas, Dames, and Daredevils is a fantastic introduction to the portrayal of women in comics, and the greatest delight is to be found in his inclusion of the actual comics to exemplify his points.

We are not just given an analysis with no frame of reference; we are shown the source material to draw our own conclusions. While the analysis is astute, the ratio of analysis to source is light on the analysis. We hope that author Madrid is not done plumbing these depths as he has an interesting and accessible take on comics’ place in literature, popular culture, and women’s history.