A Distant View of Everything: An Isabel Dalhousie Novel (11) 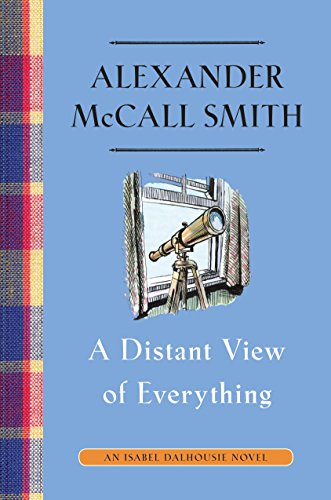 It seems ironic to wait in high excitement for a calm and quiet novel to come out. Fans of the Isobel Dalhousie series, however, will understand that irony, and be excited to learn that volume 11 is now available.

This series, set in Edinburgh, Scotland, gently portrays the adventures in the life of a modern philosopher. In A Distant View of Everything, Isobel continues loving her husband, raising her children, helping her niece, interacting with her community, and editing the Review of Applied Ethics.

So where, non-series readers might ask, is the excitement that loyal readers wait for?

In the mind, we answer. Isobel’s philosophical adventures occur in her head over the course of daily life, showing how much drama, challenge, soul searching, rationalizing, planning, learning, erring, recovering, negotiating, and strategizing take place in day-to-day interactions with others.

At work, at play, and around the table at home, there is always something going on in Isobel’s life that requires weighing and measuring; and always something that warrants reflection. Peculiar to Isobel is a magnetic quality that draws people to her for help with their troubles.

Most times, after she has considered the moral questions associated with taking on the burden of other people’s problems, she accepts involvement and does her best to get to the bottom of things. These problems form the plot of each story, and their who-what-why quality is what places the series in the “Mystery and Suspense” category despite its nonviolent, cerebral focus. The publishing industry doesn’t have a slot for “philosophical fiction.”

Here in volume 11 the mystery-problem comes from a woman who loves to matchmake, usually through dinner parties. She is proud of her successes, but in one case she realizes that she may have made a bad mistake. The man she linked a woman to has a worrisome reputation that surfaced after the fact. What she hears is second or third hand but of enough potential danger that she seeks out Isobel to advise her what to do. Actually, she wants Isobel to do whatever has to be done instead of doing it herself.

Isobel undertakes the task despite reservations. It propels her through object-lesson after object-lesson about drawing wrong conclusions from incomplete facts. The consequences affect almost all her relationships, and she has to square with everyone in order to bring things back to normal.

In the process she finds the truth about the suspect man and helps restore other people’s lives into balance. But the experience takes her up against a basic operating principle of her life:

“She was a philosopher; it was the very beginning of philosophy, that question: how we know what we think we know.” After forgetting that basic tenet and uncovering a great misunderstanding leading to other misunderstandings, she realizes she “had believed what she had been told without question. You had to be sure of your premise—you simply had to. After all, even the fundamental truths of physics could be questioned, let alone stories you’d been told second or third hand.”

Psychically bruised and embarrassed, “It crossed her mind that she could have avoided everything by simply not getting involved in the first place—but had that option really been available to her? She had applied her own test to the issue of involvement in this case—the moral proximity test—and it had pointed to a duty to intervene. But perhaps the test itself needed calibration, because whenever she applied it, she tended to get the same answer—that she should get involved.”

And thus are Isobel’s affairs complicated and resolved. Readers concerned with living their lives morally and responsibly will continue to be fascinated by the questions raised through Isobel’s adventures, and perhaps even guided by them to better solutions in their own lives. In the process, they’ll be taken to another world that nonetheless reflects their own, and pleasantly entertained in the process.