Disney's Land: Walt Disney and the Invention of the Amusement Park That Changed the World 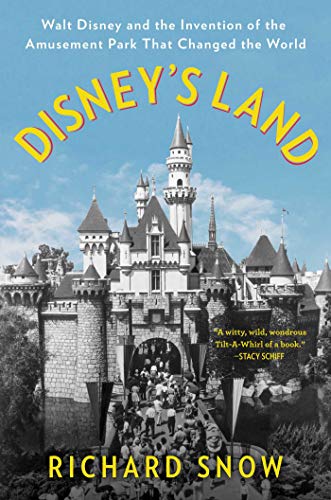 For most Americans, Disneyland has always been, but few have any understanding of how it came to be. Richard Snow fills in that gap in our collective consciousness with Disney’s Land: Walt Disney and the Invention of the Amusement Park That Changed the World.

This reviewer was not even three weeks old when Disneyland made its grand opening in Anaheim, a spectacle televised live on ABC. Its genesis can be traced back to a gift Walt Disney received shortly after the end of World War II. He had already completed his first feature-length cartoon, Show White and the Seven Dwarfs, in 1934, a “triumph” that led to additional successes in Pinocchio and Fantasia, but it was a Lionel train set he bought for himself at Christmas of 1947 that sparked Disney’s imagination.

Snow writes: “He put together the [Lionel train] layout next to his office so he could play with his railroad in odd hours. Then he thought it would be nice to add some sidings, and then put in a little landscaping, and then . . . Any collector or hobbyist will recognize the fatal progression.”

That progression included “an honest-to-god outdoor operation with grade crossings and signals, tracks and a roadbed” that Disney built on the five-acre grounds of a new house he constructed. He topped it off with a locomotive he dubbed the Lilly Belle, but he abandoned his personal railroad after an accident in which a young girl was injured, albeit a minor injury. The next step would be a full-blown amusement park circumnavigated by a train.

In a series of fascinating vignettes, Snow takes the reader through the process of fleshing out Disney’s ideas for Disneyland, an innovative amusement park unlike any other at the time. While Disney had the vision, he recognized that he needed the right personnel to turn that vision into reality. And so he surrounded himself with experts to acquire real estate, dicker with city bureaucracies, and create magical worlds like Frontierland, Tomorrowland, Main Street, and the centerpiece Sleeping Beauty’s Castle.

Then came the logistical nightmare of actually constructing the park, and paying for it only intensified the nightmare. Anyone who has ever been involved in construction knows that timely completion of a project can sometimes be as mythical as the Easter Bunny or Tooth Fairy, especially where a project of this scale was concerned. And that was where financing complicated the issue.

Disney’s genius was in striking a deal with ABC to create a television show that would, in effect, pre-sell tickets to an amusement park that was largely underwritten by the network. Disney noted that the “format of the show is America. We can mingle fantasy, we can dream and be fantastic.” But, the author says, he was concerned about how it would be received by ABC. “It was, after all, patently self-serving; would the ABC brass see the proposed show as an endless succession of commercials for the new park?”

Disney needn’t have worried, though, as ABC wholeheartedly bought in to Disney’s vision, which created the timing problem. The network purchased tens of thousands of dollars of newspaper ads and sold out all advertising spots, all premised on an opening date of July 17, 1955.

With that date etched in stone, neither cost overruns, soil issues (porous sand created problems in maintaining water levels for the Mark Twain steamboat), nor union troubles (including a strike by plumbers and asphalt layers), nor sibling squabbles (developer C. V. Wood said that his “biggest function was keeping Walt and Roy [Disney] from each other’s throats”) could derail a timely opening.  And open on time, it did, broadcast on the sacred date by ABC in a special titled Dateline Disneyland, which was hosted by Art Linkletter, and co-hosted by actors Robert Cummings and Ronald Reagan.  The show was seen by 90,000 viewers, which at the time constituted 54.2% of the U.S. population.

Despite Disney’s fears that the park would be a flop—he told his wife and daughters to stay home because “[i]t’s going to be a mess”—it proved to be a smash hit even with logistical and other problems on opening day. Advertising manager Jack Lindquist put it this way: “We are not a cure for cancer, we are not going to save the world, but if we can make people that happy for a few hours a day, then we are doing something worthwhile.”

The rest, as the saying goes, is history. There are now 12 Disney parks worldwide, though the author tells us that founder Walt Disney lived to see only the original. And to think that it all hearkened back to that Lionel train set that Disney gifted to himself.

New York Times critic Bosley Crowther wrote, after visiting Disney in the early 1950s only to find him obsessed with his train set: “All of his zest for invention, for creative fantasies, seemed to be going into this plaything. I came away feeling sad.”