A Disease in the Public Mind: A New Understanding of Why We Fought the Civil War 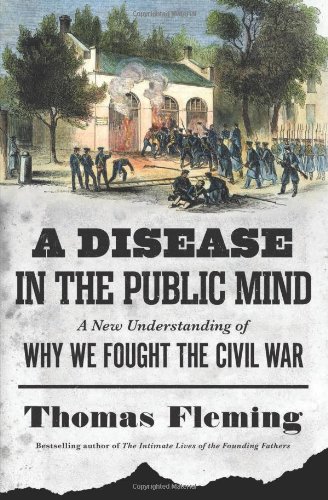 “Do we really need another book about the Civil War? Mr. Fleming makes a solid, compelling case in the affirmative.”

View a pointillism painting from a distance and the image takes on a beauty any other work of art might; step closer and you notice the image is composed of countless tiny dots of color—those myriad dots comprise the whole image that the brain melds together into what appears to be a solid painting.

History textbooks have a tendency to take the “step back” approach, leaving us and our children with a woefully lacking substrate upon which to build a genuine understanding of our own history.

In his latest work, A Disease in the Public Mind: A New Understanding of Why We Fought the Civil War, Thomas Fleming not only pulls us closer to view the dots but also gives us reason to ponder the positioning of each dot.

Do we really need another book about the Civil War? Mr. Fleming makes a solid, compelling case in the affirmative. His narrative weaves new threads through this seminal event in American history. Through his exposition of largely ignored events he affords us a clearer, much more succinct picture of antebellum America.

Slavery as a cause—undoubtedly—others are all but content to leave it at that. Mr. Fleming’s scholarship digs further into the prevailing Southern and Northern attitudes and mores of the period to draw into sharper relief the more widespread concerns, political and public, behind the Civil War.

A Disease in the Public Mind presses to dispel the illusions adhered to by both staunch abolitionists and the unyielding southern slaveholders. The “peculiar institution” made the South frighteningly more powerful than the North, but the more terrifying reason for retaining slavery was not as much the economic efficacy of slavery but the specter of Negro rebellion should they be freed. Britain did the right thing by emancipating its slave population, which resulted in a horrific and bloody uprising of newly freed slaves in the Indies. Southern politicians, like John Calhoun, used the massacre as support of his agenda of supporting slaveholding.

Most interestingly, Mr. Fleming makes the strong argument that the conditions for the Civil War existed long before secession, that they can be traced back as far as Thomas Jefferson.

Moreover the attitude as perpetuated by men like Jefferson, utter maligning of blacks as a race, fed into the deep-seated anxieties over slave rebellion and led to the “disease in the public mind.” Mr. Fleming convincingly argues that fanaticism between North and South is what ultimately led to the deaths of almost 700,000 soldiers.

Mr. Fleming is also thorough in his discussion of Lincoln and the ex-president’s true approach to the issue of slavery. Lincoln’s foremost goal was the preservation of the Union, not, as some would like us to believe, the abolition of slavery. He truly opposed the practice but saw the greater picture of a nation conjoined . . . and the grim prospect of a nation ripped asunder.

Certainly this book will provoke controversy of some manner, but we can ill afford to take as gospel truth what has typically been passed off as general history.

If we are to be the proper custodians of our own history then it becomes imperative that we give open and thorough consideration to the past, a fresh look with wiser eyes. Thomas Fleming’s perspective as a scholar of Revolutionary history opens wide the plantation shutters onto a view heretofore ignored or neglected.

A Disease in the Public Mind is not simply a thoughtful read, it is another call never to forget our sordid past, to face and conquer our fears—for if we can’t see past our fears then we can no longer move forward. Moving forward lets us more closely inspect each dot in the painting.