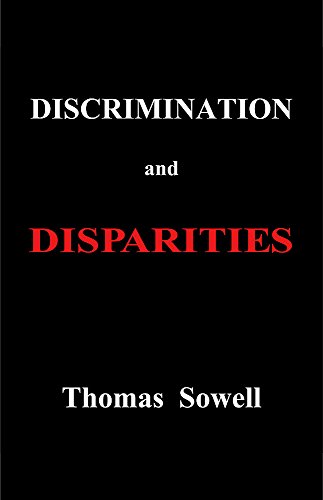 “Discrimination and Disparities demonstrates once again that Sowell is one of America’s and the world’s great public intellectuals.”

The Hoover Institution’s Thomas Sowell specializes in marshaling facts and empirical evidence to test conventional assumptions about public policy. His new book, Discrimination and Disparities, is the latest in a long line of works that calmly but persuasively shatter myths and ideological beliefs about race, ethnicity, economics, history, and culture

In Ethnic America (1980), Sowell explored how and why various ethnic groups in the United States developed socially and economically due in part to their respective cultures. He broadened his approach in The Economics and Politics of Race (1983), where he analyzed the differences in racial and ethnic economic patterns throughout the world.

Four years later in A Conflict of Visions (1987), Sowell analyzed the struggle between what he called the constrained and unconstrained visions of human nature and its prospects for perfectibility, and how those competing visions shape public policies and political conflict.

Three years later, Sowell demonstrated the “empirical weaknesses, logical flaws, and social dangers” of government-authorized preferential treatment of specific groups in various countries in Preferential Policies: An International Perspective (1990). Despite the political and moral attractions of such policies, Sowell suggested that it was more important to judge preferential policies by their results.

In Race and Culture (1994), Sowell analyzed the ways in which cultures, or what he called “human capital” in its broadest sense, affected the development and advancement of various groups across the globe and throughout history. He looked to history to expose the fallacies underlying public policies regarding race and to get a clearer sense of reality about different cultures.

The next year, Sowell wrote The Vision of the Anointed (1995), a devastating critique of liberalism and its intellectual proponents. Liberalism, he wrote, has become impervious to facts and reality. “To the anointed,” he explained, “their vision and reality are one and the same.” The anointed live in a world “where reality itself is ‘socially constructed’ and can therefore be ‘deconstructed’ and then reassembled to one’s heart’s desire.”

In Migrations and Cultures (1996), Sowell reviewed the history of migrations of peoples from various countries and demonstrated the persistent influence of culture among groups wherever they settled. Again, in the face of ideological assertions by the proponents and opponents of liberal immigration policies, he looked to history as “an anchor in reality against the rhetorical winds of the zeitgeist.”

Next came Conquests and Cultures (1998), in which Sowell assessed the impact of wars and conquests on the cultural evolution of peoples. He called this the culmination of his studies that demonstrate that “racial, ethnic, and national groups have their own respective cultures, without which their economic and social histories cannot be understood.”

Sowell renewed his intellectual assault on liberalism in The Quest for Cosmic Justice (1999). He accused modern liberal elites of abandoning the goal of legal equality in favor of a utopian goal of absolute equality constructed and enforced by the state.

More recently, in Economic Facts and Fallacies (2008) and Wealth, Poverty, and Politics (2015), Sowell further refined his arguments about the inevitability of economic inequality due to the persistent factors of geography, culture, and individual choices.

Discrimination and Disparities is one of Sowell’s shorter books. He reiterates the historically persistent fact that “economic and other outcomes often differ greatly among individuals, groups, institutions and nations.” Such disparate outcomes, he argues, cannot simply be explained by differences in “innate capabilities” or the effects of discrimination by other people.

Instead, he explains, “unequal distributions of outcomes” have been common in nature and among peoples throughout history. He approvingly quotes David Landes: “The world has never been a level playing field.”

Sowell points to a variety of factors that produce disparate outcomes among people, including differences in age, education, child-rearing, geographic location, technological advances, incentives and restraints imposed by the marketplace and governments, cultural attitudes, voluntary social sorting among individuals and groups, discrimination, and luck.

The widely accepted notion that disparate outcomes result from discrimination alone led to legislation, court decisions, and executive regulations that, though well-intentioned, ultimately failed to produce the equality of outcomes desired. What it did produce, Sowell writes, is “grievance-driven attitudes, emotions and actions.”

Disparate outcomes among peoples and groups in education, employment, wealth, crime, and other social indices cannot and will not be “solved” by the coercive policies of governments. And, in many instances, Sowell writes, government attempts to level the playing field in these areas created more social problems or exacerbated existing social problems. Culture, geography, and individual choice (human nature) have been mostly impervious to “solutions” imposed by the state.

As he has so often in his previous works, Sowell suggests that history—empirical evidence—is the best teacher. He quotes Edmund Burke: “In history a great volume is unrolled for our instruction, drawing the materials of future wisdom from past errors and infirmities of mankind.”

Throughout his career, Thomas Sowell has been fearless in confronting uncomfortable facts about human nature and ill-conceived public policies. Discrimination and Disparities demonstrates once again that Sowell is one of America’s and the world’s great public intellectuals.