A Discovery of Witches: A Novel (All Souls Trilogy) 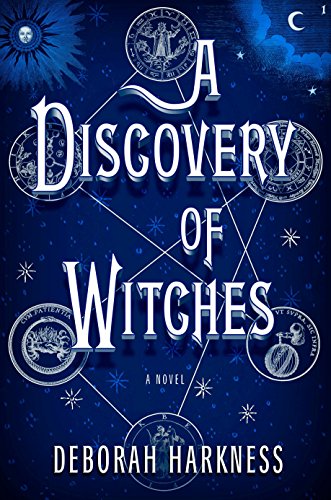 These days there are so many books about women who fall in love with vampires, but few are as interesting as A Discovery of Witches.

The vampire in question is older than the usual few hundred years, and the details of his life are meted out in little vivid snippets with a clarity and precision of detail that only a historian could manage so successfully, leading the reader through the story in all its complexity, little by little, step by step.

In fact, that clarity and fleshiness are found throughout the book in specifics such as the environs of Oxford, England, and the architectural details of ancestral manors and gorgeous, crumbling chateaus. And what is particularly well drawn is the main character, Diana, whose life in the past is just as detailed as her life in the present, both in the U.K. and the U.S.

While the accelerated relationship between vampire and mortal is a little overused in books like this, the analogies about wolves mating for life offer a fresher take on the topic. As well, the reactions of a rational and self-driven modern woman faced with overwhelming life choices also ring true and are far from contrived.

The story takes a while getting to reveal its true scope, but it is never slow, never boring, and takes the reader to the finish wanting more—the perfect way to end a book meant to be followed by other titles—and exactly the payoff a 600-page tome needs to justify its length in a world of short attention spans and instant gratification.

In fact, A Discovery of Witches is, in itself, something of a comment on our hectic modern world: Matthew, the ancient vampire and object of Diana’s affections and desires, comes from a time long gone when life moved more slowly and was expected to do so. As the story picks up speed, Matthew still allows himself moments of enjoyment and savor that might have otherwise been missed had he been a more modern creature.

And that lovely quality of lushness and sensuality—a precise engagement of all the senses nearly equally—permeates the story. So much so that throughout A Discovery of Witches, the reader can visualize what is written with a rare sort of clarity—can stop to smell the roses, so to speak—an experience that occurs less and less in our bytes-driven world.

The format of the book is such that the chapters alternate between first-person in Diana’s chapters, and a loose, omniscient third-person narrator in Matthew’s and the other characters’ chapters. This approach is at first startling, but ultimately allows a wider and more varied experience of the world of the story as it unfolds and becomes more complicated.

Secondary characters and villains at first may come across as irrational, as lacking clear motivation, or as semi-flat caricatures—but by the end of the book, as Diana grows in her understanding of the world she’s been blind to, those roles round out and make more sense—a clever, if risky, way to handle these secondary characters.

And occasionally, the narration feels clinical and a little too distant, which is most likely a holdover from the author’s main career as an academic. But as the book is about an academic, and the characters within it are appealing and compelling enough to overcome this hurdle, this detail is overshadowed by what is overall a neatly drawn and fairly unique world replete with detail, historical accuracy, rich complexity, and romance not seeped in the usual sentimentality.

This is a book to take your time with, a book to savor page by page, a book to pay attention to.

For those looking for something new in the overly crowded vampire/romance category—those who don’t mind longer works—A Discovery of Witches will be a thrilling and charming addition to your reading list.