The Discovery of Jeanne Baret: A Story of Science, the High Seas, and the First Woman to Circumnavigate the Globe 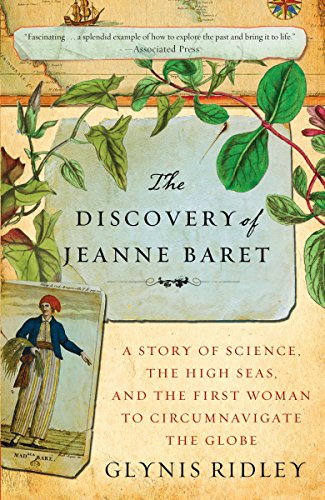 When you consider that the entire historical record for Jeanne Baret comprises little more than a birth certificate, a marriage certificate, a death certificate, and a handful of mentions in other people’s journals, Glynis Ridley’s achievement in producing an entire biography of the woman is quite something. Not just that, but Ridley’s skills as a researcher give us such a strong impression of the times Baret lived in, the people who surrounded and influenced her, and the geography through which she traveled, that, for most of the book, we hardly notice, or care.

Jeanne Baret was born in the Loire valley in France in 1740, the daughter of peasants. She died in Saint-Aulaye, also in France, in 1807, the wife of the local blacksmith. For most of her life, she lived in quiet rural obscurity, but a chance meeting with a well-connected botanist, Philibert Commerson, possibly as early as 1760, changed her life entirely and set her off on the path to wild adventure and to becoming the first woman ever to circumnavigate the globe.

Ridley speculates that Baret was an “herb woman,” with a folk knowledge of the medicinal properties of local plants and that she helped Commerson with his collecting and by describing the properties of the plants she knew. Their relationship was close. In 1764 she became his housekeeper and became pregnant—almost certainly with his child—in the same year. The couple moved to Paris—with Baret still in the role of his housekeeper—and the child was given into the care of the Paris foundling hospital for fostering in 1765.

Between them, they cooked up the plan of passing Baret off as a boy so she could continue as Commerson’s assistant when he signed on as botanist on a round-the-world expedition for the French government in 1766. But in the close confines of a wooden sailing ship, living and working among a hundred sailors for months at sea, Baret’s insistence that she was a man—even when, under questioning by the expedition commander, she claimed to be a eunuch—could not keep her gender a secret. She took to carrying Commerson’s pistols with her whenever she had to sleep among the crew, and on the various trips she and Commerson took to collect specimens from the shores of South America and the Pacific islands.

After 18 months of this, her secret was exposed—either when she called for help, under threat of rape by Tahitian men, as the official log claims, or when she was actually raped by members of the crew on the shores of New Ireland in the Solomons, as Ridley claims. Baret’s possible rape and subsequent pregnancy neatly explain why she and Commerson left the expedition at the French island of Mauritius and stayed there for several more years.

Commerson died there, leaving Baret to shift for herself, alone, homeless, penniless and unable to pay her way back to France. She worked as a barmaid for at least some of the following year and, in the end, married a French army sergeant who took her back to France and a quiet life in 1774 or 1775.

Ridley has done some impressive detective work in this book, questioning what looks like the lazy acceptance of official accounts by earlier biographers, and coming up with some very plausible alternatives. Yet the story of Jeanne Baret’s life is based on very little real evidence.

For the character of Baret herself, we have nothing at all to help us. She kept no journal, the people around her never seemed to mention what she thought or felt about anything. Even Commerson, her mentor, employer, and lover, seems completely indifferent to her in his writings.

In Ridley’s account, Baret’s feelings about what is happening to her and around her are sometimes guessed at, but Ridley is cautious and conservative, as she should be.

Yet it leaves a hole at heart of this book.

Baret was a woman who left her peasant family to live with her lover and then to tour the world with him in disguise. She practiced botany under one of France’s leading scientists, and collected and preserved thousands of specimens, often under great physical duress. She lived in Mauritius as a woman, alone and unaided, and survived. There she found and married the man who would bring her home, and then went on to live in France through all the years of the French Revolution and the terrors that followed. She was intelligent, resourceful, courageous, knowledgeable, skillful, and physically strong.

Ridley’s biography tells us what she did and where she went, and it throws some welcome light on the true story of her adventures, but it reveals almost nothing about who Jeanne Baret really was.

The Discovery of Jeanne Baret is a fine and fascinating tale, but it leaves us wanting truly to discover the woman behind the story.