The Discord of Gods (A Chorus of Dragons, 5) 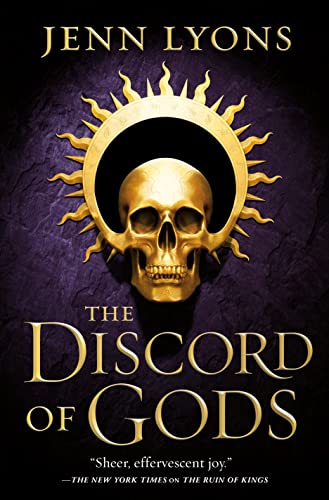 The Discord of Gods is the explosive conclusion to Jenn Lyons’ five-book, million-word fantasy epic series A Chorus of Dragons that began in 2019 with The Ruin of Kings. When it comes to gigantic action sequences, creative and complicated magic, and the clash of powerful forces, this series hardly has an equal. In the first book, Kihrin is at one point enslaved on a pirate ship while a sea witch sends a school of a hundred dolphins to defend them against a giant kraken, who chases them through a whirlpool straight into a dragon. The Discord of Gods takes huge scenes like this and manages to make them even bigger.

In fact, this series doesn’t do anything small. It is crammed full of the kind of fun magical concepts that motivate fans to construct online databases and create fan art. There are nine nearly undefeatable dragons, each of which has a dramatically different appearance and magical capability, like breathing metal shrapnel or commanding zombie animals.

There are nine magical stones called Cornerstones that grant their bearers powers, such as creating perfect illusions, knowing the answer to any question, or swapping bodies with anyone who kills them. There are magic swords and portals, royal houses and ruthless politics, and nations with different cultures and fighting styles. The book ends with a 15-page glossary and an incredibly convoluted family tree.

The family tree illustrates one of the unique ideas in the series: Death is a lot more complicated than in our mundane world. Souls bounce around with wild abandon in these books, getting reincarnated, returned to their original bodies by the Goddess of Death, eaten by demons (who are sort of like conglomerate hive-minds of souls), restored as angels in service to the gods, or just living on for a while in the Afterworld.

Add to that the Stone of Shackles, which can swap a soul into someone else’s body, and the result is all kinds of insane family relations like giving birth to one’s own grandparents. The Discord of Gods is full of lines like “I didn’t stay dead” and “Talea had never died before. At least, not that she remembered.” and “I’d killed him once. He had every reason to want to kick my ass.” Death just doesn’t mean the same thing in this world, or at least, it means half a dozen things and is rarely permanent.

In these books, gods and goddesses, god-kings and god-queens, demons and angels and dragons are all just people in different forms. The Goddess of Death can bring people back from the dead, but she’s just a person with superhuman powers. The same with the Goddess of Life, the God of Earth, the Goddess of Luck, and all the rest. Gods can die and be reborn, lose their powers or pass them to someone else. As one character says, “I don’t see what all the fuss is about. It’s not like becoming a god hurts.”

Despite all of this grand, epic, magical adventure, however, The Discord of Gods gets off to a very slow start. Part 1 is literally called “Setting Up the Pieces,” and the first 200 pages or so are just that: revisiting all of the many characters scattered all over the world, reminding the reader of what they are doing, and starting up all of the forces that will collide in the rest of the book. After a plodding fourth book of the series (The House of Always), this was a poor start for book five.

The problem is, characters have never been this series’ strength. There are quite a large number of them, but their personalities are all very similar. All of the women are stubborn, ferocious fighters; all of the men are indecisive and hesitant (or vicious and horrible villains). Every character has the same basic worldview, and they all speak with a similar voice.

A variety of romantic relationships come into play, with any combination of genders and even a three-way marriage, but none of those relationships have any chemistry, or experience much in the way of growth. As a result, scenes with no action have little interest for the reader. The House of Always saw the characters trapped in a single building for almost the entire story, which made it the least interesting of the series.

Fortunately, after a tedious beginning, The Discord of Gods starts up the action and fairly explodes off the page. A breakneck series of gigantic battle sequences brings together all the gods, dragons, magical stones, and complicated interactions with death that have made these books shine. A strength of the books has always been the creative ways in which different kinds of magical objects, creatures, and people can be combined for unexpected effects, and that is on dramatic display. Relos Var finally brings together his elaborate plan, thousands of years in the making (which will strip all the gods of their powers, annihilate the demons, and kill off most of the human race), and the plucky band of heroes (amoral and emotionally broken though they may be) must pull out every trick they can find to defeat him. The result is the collision of every epic magical element of the series into a mammoth clash and a satisfying conclusion.