Dinners with Ruth: A Memoir on the Power of Friendships 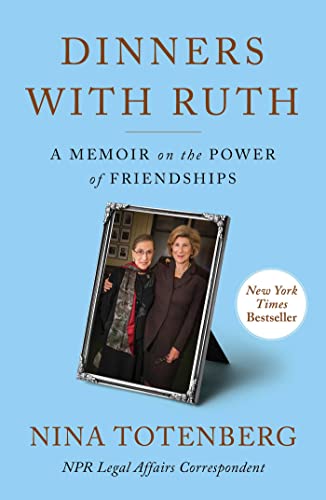 “The last time I saw Ruth, it was for supper.”

Complete opposites though they were, Ruth Bader Ginsburg (hereinafter referred to as “RBG” for brevity) and Nina Totenberg “found each other” in 1971 and had an almost 50-year-long friendship. Often, opposites attract. Totenberg never graduated college, and of course, RBG graduated tied for first in her law school’s graduating class.

“The last time I saw Ruth, it was for supper.” RBG enjoyed the bouillabaisse that Totenberg’s (second) husband prepared, particularly after the onset of Covid-19. Saturday dinners were reserved for RBG.

Both women were daughters of European immigrants. Nina Totenberg’s father was a virtuoso violinist who, at 11, was a soloist with the Warsaw Philharmonic. He avoided the Holocaust, moved to the United States in 1935, and made his American musical debut. Her mother, Melanie, born in California, married Roman Totenberg in New York in 1941.

RBG’s father, Nathan Bader, was an immigrant from Ukraine, and her mother was the daughter of immigrants from Poland. Reading was encouraged with weekly trips to the library; as a result RBG was high school valedictorian, though her mother died from cervical cancer the day before. She then thrived at Cornell, where she met her husband, Martin Ginsburg.

Per Totenberg, “Ruth and Marty Ginsburg had that symbiotic harmony.” That harmony would last until his death in 2010.

Totenberg was the eldest of three daughters, and in contrast to RBG, was not “an exceptional student”; however, she enjoyed politics at an early age. Totenberg’s mother arranged, with Eleanor Roosevelt, a Democratic internship for her, at 17, in DC. She went on to Boston University but left after three years to become a newspaper reporter in New England.

After jobs at local newspapers, Totenberg headed to DC in 1968 for a $75 per week job at another newspaper, and soon at The National Observer, where she earned less than male reporters. Soon she became good at “tracking down crumbs of information . . . [that] can lead to a major scoop.”

RBG, who already had two young children, graduated from Columbia Law School in 1959. She was hired as a law professor by Rutgers University in 1963 also at a lower salary than male counterparts. “It was very much the way it was.”

In 1971, Totenberg was covering a story about the Fourteenth Amendment and gender equality; the brief was written by RBG. Totenberg found her number, a phone booth, and placed an hour-long call, which began the start of their nearly 50-year-long friendship.

They loved to shop and said Totenberg, RBG, “was petite and beautiful . . . (and) her sizes were two and occasionally four.” Totenberg, however found stores often ran out of her (larger) sizes.

In the seventies, while Totenberg was still a novice reporter, she attempted to get to know the Supreme Court justices—even “a little bit to pierce the veil of secrecy. . . . In my brash youth, it never occurred to me that some might view my approach as unseemly.” Then came her job, in 1975, with NPR.

Totenberg’s first husband, Floyd Haskell, was 28 years older. RBG was appointed to Federal Court, so she and Marty moved to D.C. and began to “hang out” with Totenberg and Haskell. When Haskell was hospitalized, RBG “was a personal lifeline.” However, after recovery, Haskell was diagnosed with lung cancer.

After Haskell died, he was buried at Arlington National Cemetery, having served in World War II. Totenberg’s NPR coworker, Cokie Roberts, helped with the arrangements.

In 1993, when RBG was considered for Supreme Court, Totenberg thought her age (60) might be a disadvantage. RBG said, “That’s just silly,” and of course everyone knows what happened after that. They both agreed not to provide career advice afterward!

Both Totenberg and RBG had a strong friendship with the late Justice Scalia, though he was polar (political) opposites with the ladies. RBG and Scalia once rode together on an elephant during a trip to India!

Totenberg met her second husband, David, a surgeon, in 1999, at her father’s concert in Boston. They had met previously when both were married to others—both their spouses had died.

After Marty died, RBG worked hard and became the cultural icon, “Notorious R.B.G.,” and was deemed a “rock star” by Totenberg. Totenberg and hubby took to having dinners (and parties) with RBG, hence the title, Dinners with Ruth.

Toward the end of her life, RBG made incendiary remarks about Trump. Totenberg and hubby, David, often cooked for her. She also worked out with a personal trainer throughout most of her illnesses, including shingles, lung cancer, and another pancreatic tumor. “Ruth embraced life until the very end.”

Said Totenberg after she was gifted one of Ruth’s possessions, “I wear the necklace whenever I am feeling stupid . . . I need a dose of brains to help me write.”

Totenberg created a great work, sharing her relationships across all political parties, enhanced by her nearly 50-year loving bond with RBG.