The Digital Plenitude: The Decline of Elite Culture and the Rise of New Media (The MIT Press) 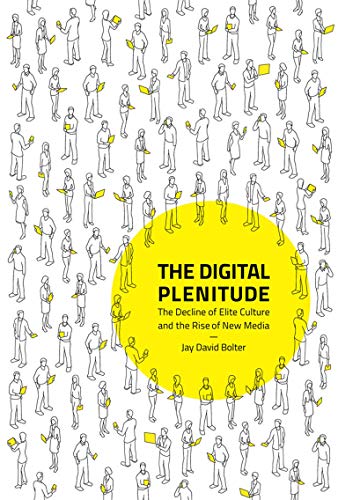 The Digital Plenitude: The Decline of Elite Culture and the Rise of New Media by Jay David Bolter is a book about exactly that: the decline of one thing and the rise of another. The author attacks nor defends either, and it’s not even a matter of cause and effect, in his view, the more useful point being that the present multiplicity of options when it comes to media/art/culture is not a problem to be solved, but rather a concept to understand so that we may better navigate the changed world we still need to live in.

“The condition of media culture today is a plenitude—a universe of products (websites, video, games, blogs, books, films, television, and radio programs, magazines, and so on) and practices (the making of all these products together with their remixing, sharing and critiquing) so vast, varied and dynamic that it is not comprehensible as a whole. The plenitude easily accommodates, indeed swallows up, the contradictory forces of high and popular culture, old and new media, conservative and radical social views. It is not only the size of our data universe that makes it a plenitude, but also its complexity in relation to our ability to access and assimilate it.”

That accessing and assimilating is closely related to the concept of curation, since part of what organized whatever amount of media, art, or other cultural product we had before this present age of digital ubiquity of all things entertainment, were the institutionalized parameters of what constituted good media, art or culture, back then called “high culture,” which doesn’t really exist anymore, at least not as such. In other words, there is no one center telling us what to like anymore.

But according to Mr. Bolter, what do exist are “focal points.” Smaller centers composed of groups of those who care about, follow, study and seek to preserve a particular media. Of course, this is why you see such disruption. Industries that used to have large centers, now have smaller, more localized ones and this throws off the business models of those at the top of the hierarchies that used to be able to tell us what to listen to, read, and buy.

For example, rap is as worthy as opera in this day and age. What piece of rap can be considered good rap, will be decided by those who love rap, consume it, and study it. This doesn’t mean that all of us will have to accept that rap is the measure for good music (indeed it’s the opposite, only a focal group, a subset of all people will choose to like it and consume it), but it also means that lovers of opera or classical music can no longer claim their taste to be the higher maxim or the benchmark to aspire to.

This argument builds on others in this clearly-written, well-focused book. One of them is that this is not just about digital. Art and culture are being produced digitally and non-digitally, the physical and the cyber world coming together for most, if not all, artistic enterprises in this day and age.

“High culture and art have not been replaced by television, video games, or anything else. There is no new universal paradigm. Instead, our media culture has become additive, accepting new forms such as video games, that sometimes cooperate with older forms, such as film, and sometimes compete with them.”

Another argument is a highly political, but necessary, one for those still whining about the end of watercooler culture:

“In 1960 a relatively small group of producers controlled the content for a huge audience of consumers. But the relative central unity of that period also meant the categorization and marginalization of women and minorities in the media to an even greater extent than today.”

And, of course, that loss of a generalized concept of what constitutes quality is offset by an important gain: We are all artists now, or can be if we want to be.

“Art and media are now the same thing. To say someone is an artist has become simply another way of saying that he or she works creatively in any recognized media form, old or new.”

So then how do we navigate this new world in which we are all creators and consumers of the inspired thought and intent of others?

The Digital Plenitude is at its best when answering that question, making arguments addressing the how-to of dealing with a universe focused on creation and enabled to distribute its results to the world in seconds. There are several chapters dealing with issues such as “Procedurality” (the key to understanding how the digital mindset works), with the tension between flow and catharsis within the process of creating, and with how all of this plays into the politics and the economics of our world.

Mindset is a key word here. This book does not attempt to break down every single event and process that got us here beyond what is useful for placing it in its proper context or role as part of the digital plenitude. It does highlight what helps explain how this digital plenitude came to be, and how it is arranged. In other words, this book is a map, not a self-help book.

But when you’re dealing with a plenitude, a vast expanse of figurative land from coast to coast of a seemingly infinite digital universe, a map may just be the thing to have with you, and certainly the first step to finally wrapping your arms around things once and for all.