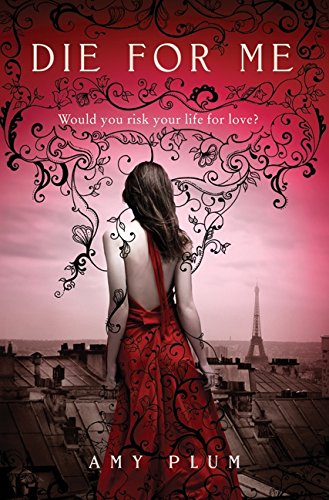 Die for Me is the debut novel of Amy Plum, an Alabama native living the literary life in the French Countryside. It would not be unusual to find Ms. Plum cranking out the pages of her Work-In-Progress in an ancient French castle. She puts the City of Lights to excellent use in the first book of this young adult, paranormal romantic trilogy.

Kate Mercier, age 16, a New Yorker living in Brooklyn, finds her life turned upside down in more ways than one when her parents die in a car accident. Kate and her sister leave their old life behind and try to start life afresh when they move to Paris to live with their grandparents. Kate hopes to lose herself and forget her pain in a world of books and art.

During one of her forages, she encounters a mysterious and extremely handsome young man named Vincent. Though cautious, Kate finds herself charmed and intrigued by him. As she spends time with him, she questions how much she really knows about him. Vincent seems to be hiding something.

Before long, Kate discovers what it is. Vincent is not what he appears to be. And his secret is deadly. He is already at risk—every day. Now Kate’s association with him puts her very life in danger as well. She finds herself right in the middle of an ancient struggle between good and evil. Kate has already lost so much. Just as she was starting to heal, she must confront an important decision: How important is Vincent to her? His love and all he has to offer, is it worth losing him and suffering a broken heart once more. Can she subject herself to never feeling safe again?

Amy Plum is to be commended for bring a fresh spin to a crowded genre: young adult, paranormal romance. She’s created a new mythology that is unique and thrilling. Without giving away any spoilers, it’s an intriguing premise that is ripe with options to take the story in any number of exciting directions.

Die for Me is atmospheric, fully engaging Parisian and French elements. The setting almost becomes another character. Ms. Plum expertly intertwines French sensibilities into the story without overwhelming the reader. Indeed, one is able to get a good sense of Paris and some of the culture.

Even the secondary characters have well-fleshed–out personalities and exhibit their own unique mannerisms and personas. In addition to the intense romance, the paranormal element drives the story toward an action-packed adventure, filled with danger and uncertainty. It concludes on a solid ending, but it is clear there is much more to learn; and the reader is left with barely contained anticipation for the next installment.