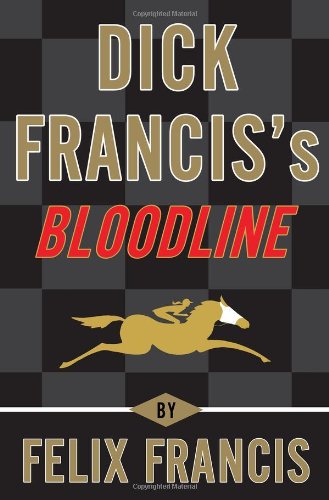 Many a young man has succeeded his father in the family business. Felix Francis counts among them, though in his case the family business is writing bestselling crime novels set in the British horse racing industry—an unusual way to make a living and an artistic challenge of daunting magnitude.

It takes a lot of guts and practice to reinvent somebody else’s fictional world and put your own stamp on it, making it equal or better. We must give Mr. Francis big credit for the risk he’s taking by following in his father’s writerly footsteps.

The father carved a unique niche in a signature style. The son must maintain these while imbuing the work with his own voice. In Bloodline, the second novel Mr. Francis has written solo, he comes closer to the ideal than in his previous effort (Gamble), though the narrative still feels tentative.

But Mr. Francis knows the drill, having grown up in the milieu of his father’s writing. He helped in plotting and research then coauthored four novels with the master before striking out on his own after Dick Francis died in 2010.

Each of the 40+ Francis books is set either directly in the racing world or in one of the enterprises that support it. In Bloodline, the main character, Mark Shillingford, is a race caller and television commentator whose twin sister is a winning jockey. He’s the only one in his family bloodline who does not have a ferocious competitive streak.

When Mark’s sister, Clare, inexplicably falls from a hotel balcony in what the police dismiss as a suicide, Mark is compelled by grief and unanswered questions to investigate what happened. Last he knew, mere hours earlier, Clare was at the top of her form and had no reason to kill herself and showed no signs of the urge.

She had, however, gotten herself into trouble pertaining to race-fixing that only Mark knows about, and he soon realizes that this trouble and her demise are related. Digging for the truth pulls him out of complacency—and into Clare’s trouble as well. He ultimately engages his unrealized talents to solve the crime, nearly plunging to his own death from a great height in order to flush out the killer.

Such a plot is standard Francis fare and works every time, leading some critics to label the books as “formula.” But the Francis formula keeps pages turning, and the Francis hero archetype always satisfies.

Mark, like his fictional forebears, is intelligent and resourceful, flawed but able to learn from his mistakes, noble yet humble, and heroic in the way a man should be when thrust into horrible circumstances. Mr. Francis’s writing style is the same lean but descriptive prose that readers have come to expect, capturing character, setting, and action in quick-sketch strokes rather than belabored painting.

While it’s unrealistic and unfair to expect Mr. Francis to write exactly like his father did, it’s nigh impossible for loyal readers to not compare the two. All the right elements are there, but something hard to put one’s finger on shows the difference.

Dick Francis’s background was racing, whereas Felix’s is science. These disciplines require different mindsets and experience, thereby giving these writers the dissimilar perspectives that underlie two generations of Francis books.

Many volumes ago, Dick ventured away from the track to explore its supporting industries (shipping, supplying, security, entertainment, etc.). This opened the door for Felix’s inclinations and explorations. Though well acquainted with the racing world, Felix never rode in it. However, he understands the life as well as its associated occupations and processes. This allows him to present them with fascinating verisimilitude.

Following in someone’s footsteps can make the follower seem like a shadow. Mr. Francis’s publisher reveals its own tentativeness by titling the book Dick Francis’s Bloodline. Rabid fans of Dick’s work will sense the difference but not walk away disappointed. The only change in their reading experience will be, perhaps, a delay in picking up the book instead of galloping out to get it the moment it’s released, and finishing it in two or three sittings instead of one.