Diary of a Void: A Novel 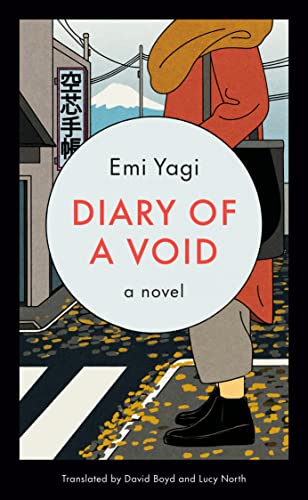 “This is a very funny, easy to read novel that has an edge thanks to its main character’s charade.”

Ms. Shibata is one of the only women in a male-dominated workplace in Japan where her colleagues constantly treat her like the custodial staff. That she’s a 34-year-old peer never seems to dawn on them, so she decides to take matters into her own hands in a comic, un-feminist way.

On any typical day before her quiet rebellion, Ms. Shibata is more or less ordered by her male colleagues to clean up the conference room. They do so in their own way, writes Emi Yagi, a very funny writer.

No matter. She knows what they mean, and she complies until one day, she doesn’t. On the spur of the moment, she tells one of the men that the smell of their cigarettes is making her nauseated because she’s pregnant.

Turns out, she’s pulled the right card out of the deck. The “fact” that she’s supposedly pregnant changes everything in the workplace. She no longer has to clean up, she gets much more respect with all the men falling over themselves to assist her, and she gets to leave early. That turns out to be a revelation as she sees many others leaving on the train at 5:00 p.m. She’s amazed, and her surprise only grows when she goes shopping after work and realizes how much greater the variety of fresh food is when you don’t leave your office after dark.

The only problem for Ms. Shibata is that of course, she is not pregnant. Or is she? As the story goes on, it’s hard to tell. She gains weight, she takes an aerobics class for pregnant women and has drinks and goes out to eat with them, she even begins to lose her balance and keeps track of her baby’s size on a specialized app.

We’re told that she stuffs her pants with scarfs to make her look pregnant but, as she gains weight, that becomes less and less necessary. The reader is as off balance as the main character as the story progresses and we wonder what will happen when the nine-month mark arrives. How will she pull this off? Won’t her co-workers be suspicious?

The reader can barely wait to learn what ultimately happens, but in the meantime, it’s a joy to read this delightfully juicy story on the stupidity of men and naivete of women. Ms. Shibata herself is a lonely and sad figure despite of or because of her masquerade. She has no partner or husband and spends weekends alone, sometimes talking to no one.

Her “pregnancy” is the only thing that provides companionship in her life, and she is fully on board. She reads baby magazines and wonders what her imaginary baby will look like. She even makes sketches of her perfectly imagined baby.

The author has her ruminating: “Okay, maybe I can live with eyes that aren’t really big and bright. Why overdo it? On the whole, best to avoid features that are too striking. Lips not too full, not too high. Eyebrows not too bushy, and well defined. Maybe a beauty spot under one eye . . .Hmm. Not bad.

“As I wrote in my notebook, I wondered: How many other imaginary children were there in world? And where were they now? What were they doing? I hoped they were leading happy lives.”

Toward the end of the novel and just prior to Ms. Shibata’s due date, she meets a woman she knew from the aerobics class who is wandering the streets at night with her baby because it will not sleep. The sometimes harsh reality of having a newborn and caring for it affects Ms. Shibata. Will she finally stop pretending?

This is a very funny, easy to read novel that has an edge thanks to its main character’s charade. It’s all the reader can do not to turn to the final pages to see how it all ends up.