Diary of a Dead Man on Leave 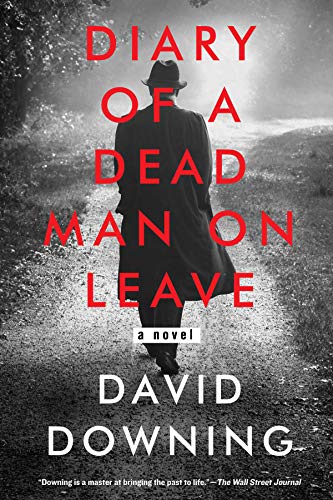 “Retelling wartime history as spy fiction is Downing’s deeply grounded path; pointing out the power of love and family within it, however, is his aria.”

The Cold War? History. The Red Menace? A comic-book phrase tossed around in period films. World-makers struggling to turn the globe into a follow-up from the Russian revolution of 1917? Ridiculous.

Except, as the “Mueller Report” reveals, there is an ongoing and powerful effort of the Great Powers of the world to exert political will on each other, even if it’s just to distract leaders and hamper economies. David Downing’s series of haunting mysteries set in Berlin (the John Russell series) led to the Jack McColl series, thrillers positioned at the start of the First World War. With his 2019 “stand-alone” espionage adventure, Diary of a Dead Man on Leave, Downing puffs on what now seem like the long-dormant embers of the Communist Party—but they were far from dormant as Germany positioned itself to invade its neighbors in 1938.

Unlike his two earlier series, Downing does not center the emotion of Diary of a Dead Man on Leave on a couple falling in love or struggling to maintain a relationship through political upheaval. Instead, he fingers the tenderness that can grow unexpectedly between an isolated worker for a better world and a child who needs his counsel and support.

To Josef Hoffman, struggling on behalf of Russia’s Kremlin to recruit a Communist cell within Nazi Germany five years after Adolf Hitler has seized control, the dream of a worker-led world with fairness and justice is worth every sacrifice. He’s already handled a hidden life in distant Argentina, among displaced Germans there. Now, infiltrating cautiously among the railroad men in Hamm, he knows his chances of a misstep are high . . . and his death unpredictably close. To quote a 1919 leader from the Soviet Union, “we Communists are all dead men on leave”—that is, only (at best) experiencing a brief respite from self-sacrifice at every level. Downing applies the quotation as a meme for the Communist agents working outside the Soviet Union.

But for a dead man, Josef has a lot of heart. Hiding out in a boardinghouse where the landlady struggles to raise her son safely amid men who want to take over her life and her child’s, Josef’s first intention is to do no harm: Be kind toward young Walter, but insulate him from politics.

Yet he fails at this, repeatedly, as when the youngster asks his help on an assignment to provide proof of racial superiority of Nordic people in terms of speech and singing. “‘It can’t be true, can it?’ Walter asked doubtfully after he’d finished reading the passage. No, it couldn’t, I thought, but that’s what they rely on—that smidgen of doubt. Anyone who’d listened to a Negro gospel choir or an Italian opera diva would know such ideas for the rubbish they were, but few had been so lucky, especially in a place like Hamm.”

Can Josef answer Walter honestly, while at the same time teaching the youngster enough to protect him in a brutally propagandistic school system and devouring army? What about the rest of Walter’s family—the mother, the brother, the grandfather?

The dangers and sacrifices of Josef’s live create a dramatic and piercing counterpoint to the usual story of espionage. In Downing’s hands, they also create a call to action for our time. But set that aside and absorb the story instead. Retelling wartime history as spy fiction is Downing’s deeply grounded path; pointing out the power of love and family within it, however, is his aria.