Diary of the Dark Years, 1940–1944: Collaboration, Resistance, and Daily Life in Occupied Paris 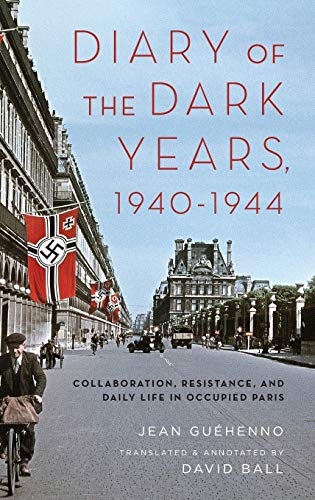 “Guehenno’s diary is important because it bears witness to war. In similar texts that include Samuel Hyne’s A Soldier's Tale to Bernard Fall’s VietNam Witness, along with many others, this ability to witness and record events serves as a type of reckoning.”

The recent 70th Anniversary of the D-Day Invasion serves as an important and powerful reminder of what the liberation of Europe during World War II required. That critical operation, and the subsequent liberation of Europe, deserves continued research as, for example, notable works such as The Guns at Last Light by Rick Atkinson superbly provide. The period of Europe’s occupation similarly deserves attention in order to enrich our understanding of what was at stake on June 6, 1944 and in those months that followed.

Diary of the Dark Years, 1940–1944, by Jean Guehenno, provides a detailed and panoramic sense of life during the Nazi Occupation of Paris. It greatly amplifies not only D-Day’s importance, but also the political and moral turmoil of France and its citizens during the war.

Guehenno was an intellectual and teacher at Parisian lycées, who specialized in teaching advanced students. Due to his antipathy toward the Vichy Regime, he turned his literary effort toward his diary and opposed authors who published during the occupation. In Guehenno's way, this enabled him to avoid the stigma of contributing any work that was remotely collaborationist, and it, along with his indirect support of the French Resistance, constituted his opposition to both Vichy and the Nazis.

Due to his unwillingness to support the Vichy Regime, he was demoted to teaching much larger classes of young adolescents. This type of passive-aggressive punishment contrasts significantly with the Maquis and other resistance members who were murdered on a daily basis; however, because of his advanced age and social station, Guehenno was not in a position to join the Maquis.

The diary’s organization consists of an introduction and four main chapters, one for each year from 1940 through 1944 of the Occupation. The entries are completed chronologically, of course, although not on a strict, daily schedule. The consistency with which he wrote provides a strong sense of key events, as well as day-to-day existence under the Occupation.

In the entries Guehenno provides pithy detail into both his own work and thoughts and also reflection and description of France’s plight during the Occupation. These include descriptions of grievances the French experienced at the hands of the Nazis, and, in the case of Vichy-led France, also those concocted by their own hands.

There are several narratives that remain consistent throughout the diary. These include Guehenno’s thoughts and anger toward fellow authors who collaborated with the Vichy Regime through the act of publishing, an action that Guehenno viewed as implied collaboration, and thus, treason.

Another narrative focuses on Guehenno’s description of former students who joined the Maquis (and the French Resistance generally) and discussions of their letters to him. One substantive example includes a description of the Maquis’ efforts and support for General De Gaulle.

“The general feeling is that the great problems will be solved over their heads, and they are merely numbers thrown into an inevitable combat. Just one thing remains intact: their faith in the probity and intransigent fidelity of General De Gaulle. Let that be their homage to him. He cannot receive purer homage, more marked by anguish and hope.”

Guehenno also provides ample thought on the history of French Literature and consistently debates the political history of France as it moved from Revolution to Republic, to Empire and back to Republic. All of his meditative reflections remain connected to the eventual liberation of France and the efforts of the Free French Government who sought a new Fourth Republic led by De Gaulle. Guehenno also comments on those who sought an alternative to De Gaulle’s vision, whether it was communism, or a variation on Vichy’s lame, sclerotic and treacherous sense of government.

Notably, Guehenno found a great deal of solace in the works of Jean Jacques Rousseau who figures prominently in the diary. Guehenno’s intellectual meditations on Rousseau contrast starkly with his descriptions of the dark political and moral problems of his day. Guehenno, for example, relates the plight of French Jews as they experienced increased discrimination and later, deportation to concentration camps.

“On Rue Compans several men were taken away. Their wives and children begged the police, shouted, wept…The working people of Paris who saw these heartrending scenes were full of indignation and shame.”

Guehenno survived to complete his diary; it was published in 1947 as Journal des années noires by Gallimard, a long-standing Parisian firm. David Ball, Professor Emeritus of French and Comparative Literature at Smith College, deserves a great deal of credit for his translation, and he presents a clear and readable text with sophistication and nuance.

Guehenno’s diary is important because it bears witness to war. In similar texts that include Samuel Hyne’s A Soldier's Tale to Bernard Fall’s VietNam Witness, along with many others, this ability to witness and record events serves as a type of reckoning. In Guehenno’s diary, his efforts also provide an account and description of a war that he regarded as ‘the stupidity of our time.’

However, as the final August 25, 1944 entry suggests the stupidity of two World Wars ends with a sense of redemption. Guehenno writes, “The first tanks of Leclerc's army had just rolled up to Notre Dame. And then all the bells of all the churches rang in the night, drowning out the rumbling of the big guns. Freedom—France is beginning again.”