Diane Arbus: Portrait of a Photographer 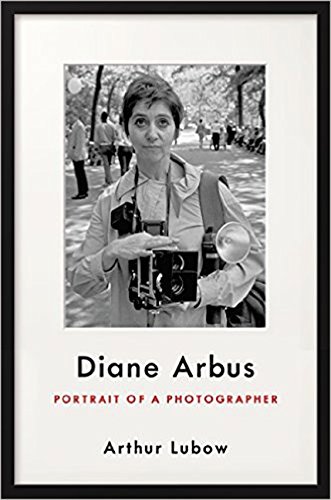 “an entirely convincing portrait of an entirely unconventional and brilliant individual.”

In this engrossing biography, 12 years in the making, Arthur Lubow chronicles the life and work of a remarkable artist and photographer, Diane Arbus, who committed suicide in 1971.

The 16 pages of black and white photographs in the 732 page text are photographs of Arbus, her friends and family, rather than photographs by Arbus, as the Arbus Estate did not authorize their use though Lubow  in the end notes provides information as to where these photographs have been reproduced.

It is tribute to Lubow that brings many of these absent photographs and the circumstances of their being shot, so vividly to life though it would have been preferable to confirm or qualify his views  by easy reference to the photograph in question.

Diane Nemerov, the family was of Polish Jewish extraction, had an upper middle-class upbringing in New York as a result of the thriving family business in furs and women’s fashions, which was subsequently somewhat damaged by her father’s public philandering and by the effects of the Great Depression.

To their mother’s dismay both Diane and her brother, who became the poet Howard Nemerov, turned to the arts rather than to commerce. They also turned to each other, apparently enjoying incestuous relations throughout their lives as casually mentioned by Diane to her psychiatrist shortly before her death.

After attending a private girls’ school where she excelled in drawing and painting, rather than going to college as had been expected, Diane married a professional photographer Allan Arbus, and abandoned painting to work with him initially on fashion photography assignments for the family firm, Russeks.

Quite soon she found fashion photography unbearably artificial, and both the text and her story come to life when she quits the business partnership with Allan and trains as a photographer. She and her husband remain close even after the divorce and his subsequent remarriage, and he continued to provide technical and financial support.

After training with Lisette Model, Arbus began to seek what became her signature subjects—twins, triplets, the down-and-out and marginal, and circus “freaks”—though she also took photographs of New York matrons and children, landscapes, and streetscapes.

Unlike some of her contemporaries’ photographs, hers were not stolen moments or a hasty slice of life taken without the subject’s knowledge. On the contrary Arbus established a relationship of intense communication with the subjects of her photographs—she photographed nudists in the nude—but as she said it was a relationship of curiosity, of wanting to understand them, rather than empathy. As she said “I don’t mean I wish my children looked like that—I don’t mean that in my private life I want to kiss you.”

Despite her often precarious lifestyle Arbus retained her rich girl’s sense of entitlement. She was always ambivalent about financial considerations if they were at odds with her aesthetic interests and ideals. Though highly regarded by fellow photographers and active on the larger cultural scene, she lived for most of her adult life in relative poverty.

She had multiple sexual relationships with men and women including encounters in swimming pools and in the back seats of buses, which damaged her health and perhaps contributed to her last fatal depression.

Lubow has drawn on many sources—interviews with Arbus’s friends, family, colleagues and lovers and previously unknown letters between them—and produces an entirely convincing portrait of an entirely unconventional and brilliant individual.