Devoted: 38 Extraordinary Tales of Love, Loyalty, and Life with Dogs 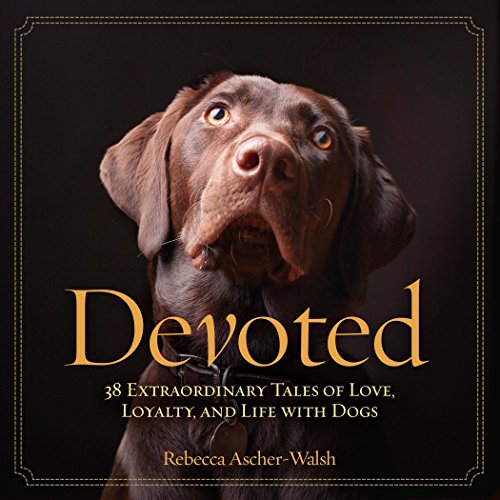 If you are one of those folks who feels it’s never too early to shop for holiday gifts, get this beguiling little book for the dog lover on your list.

Rebecca Ascher-Walsh has collected 38 stories of faithful and gallant hounds. Their stories of courage and fidelity will amaze you and have dog lovers everywhere nodding their heads in recognition and agreement.

And the captivating photographs enable the reader to enjoy these beautiful and heroic dogs.

You may have seen the picture of Schoep, a German shepherd mix adopted from a Wisconsin shelter and named for that state’s famous ice cream. It made the rounds on the Internet about a year ago. Schoep is snuggled up on his master’s chest as the two blissfully float in Lake Superior. Such trust is beautiful, and now we learn the story of how Schoep was rescued from a shelter and the many months of training it took the dog to trust, which makes the photo even more remarkable.

But for every story of a human rescuing a canine, there is a story of the dog rescuing the human from the depths of misery.

David E. Sharpe is an Air Force veteran who returned from his deployment in Saudi Arabia in 2009, but trauma came home with him. A friend suggested he get a dog, and he picked Cheyenne, a brown and white pit bull puppy.

Three months later things got really bad, and he was ready to commit suicide.

He put a gun in his month. The six month old puppy came up and licked him in the ear, which distracted him so much he took the gun out of his mouth to ask her why she did that.

“And she came over and sat down in my lap and put her head on my right thigh. The pistol was on my left. I understood it was an ultimatum to choose her or take my life. I chose her and never looked back.”

Not only did Cheyenne save David, she saved countless others when Sharpe started Companions for Heroes, which pairs vets, active duty personnel, first responders, and their families with rescue dogs. The organization pays the adoption fee and the first year of vet bills. They have a 98% placement success rate.

Then there are stories about dogs and medical issues.

Effie, a mixed breed stubbornly kept pushing her nose into Lisa Hubler’s breast. Mammograms showed nothing, but the dog’s persistence convinced Lisa to have an ultrasound, and a fast growing cancer was discovered.

Ko’s (pronounced KAY-os) is a Canadian Neapolitan Mastiff who alerted his family in the middle of the night when son Hunter was having a grand mal seizure. Since this massive breed was bred as a guard dog and defender of family and property it makes perfect sense that Ko’s knew the seizure was an ominous omen.

There is a bumper sticker popular with people who rescue pets asking “Who rescued whom?”