Disappearance at Devil's Rock: A Novel 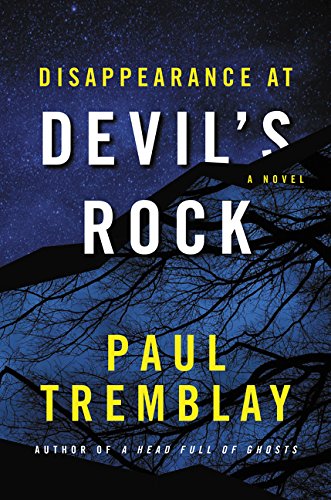 “a true and powerful mystery novel, full of twists and horrors . . .”

Last year, Paul Tremblay’s “postmodern secular possession novel,” A Head Full of Ghosts, became a runaway bestseller. It caused a wave in horror fiction that caught even Stephen King’s attention; mainstream literature ushered in the genre in a big way—and the book is already under development as a motion picture adaptation from Focus Films. Many a reader was left wondering how Tremblay would follow up such a phenomenal bestseller. Ultimately, he did what he does best: He wrote something new and completely different.

One of the most notable aspects of Tremblay’s oeuvre is his seemingly never-ending range. With The Little Sleep and its follow-up No Sleep Till Wonderland (2009 and 2010, Henry Holt), he turned the detective genre on its head with the surreal adventures of a narcoleptic private detective.

Swallowing a Donkey’s Eye (2012, ChiZine) was a socio-political family drama set against the backdrop of a very unusual dystopian world, in which the upper class lives in a city built above a sprawling pier and the rest of society live beneath.

His literary kaleidoscope is even more varied with his short story collections Compositions for the Young and Old (2005, Prime Books) and In the Mean Time (2010, Chizine). So it is that with his new novel Disappearance at Devil’s Rock, he leads readers into his latest narrative exploration, in this case, a dark mystery.

In this novel, thirteen-year-old Tommy Sanderson doesn’t come home from an evening trip in the woods with his friends. His mother, Elizabeth, is thrown down a rabbit-hole of secrets and lies as an official search begins; Tommy’s friends, Luis and Josh, don’t seem to be telling the whole truth—and even Elizabeth’s younger daughter, Kate, is beginning to reveal that she has some secrets of her own.

Tommy’s absence is not the only thing haunting the Sanderson household, however: strange phenomena begin to unfold as pages from a secret journal that Tommy had kept begin to mysteriously appear . . . and town-wide rumors begin to circulate of a dark figure seen lurking in backyards and peering in through windows at night.

As with all of his other novels, Disappearance is a tale that is far more than what it at first appears. As layers of mystery and secrecy are peeled back by both the characters and the reader, a dark but powerful heart is found beating at its center. The Sanderson household is full of skeletons in closets, sometimes profound, sometimes pathetic—yet always painfully realistic.

Elizabeth’s strength and anguish take turns with her, keeping her (and the reader) constantly on edge as she learns more and more of the secret life of her missing son. Kate’s teenaged petulance is a wall that she is always seeking to rebuild and rearrange as external truths and facts begin to wear it down. And Elizabeth’s mother, Janice, although mostly peripheral, serves a role that is far more than matronly support as she struggles to keep her family’s snowballing anxieties in check.

Disappearance’s narrative is deliberately paced. Told in a lucid present tense, with sparing use of the past tense reserved to emphasize flashback sequences, a perfect orchestra of rising tension and terror is composed with the same finesse of Tremblay’s previous books.

Coupled with perfectly-executed dialogue, full of enough realistic stammers and inflections to sound lifelike without sacrificing the conversations at hand, the narrative often takes on an almost script-like format, which not only keeps the prose flowing quickly, it is also frequently used to conceal various nuances which otherwise hint at larger conversations unfolding between the words.

In one early scene, Elizabeth asks Tommy’s friends Luis and Josh if they know anything about his secret journal. “Luis and Josh spliced two mumbling, sputtering sentences together into one answer. They weren’t lying. At least, Luis wasn’t. He honestly knows nothing of a diary.” Left alone after, they are left to ponder: “Luis: ‘Do you think Tommy wrote about . . . ?’ He stops, afraid to say anything more. Josh: ‘I-I don’t know.’”

Though perhaps less experimental in its literary exploits than A Head Full of Ghosts, this novel still makes a few clever, deliberate postmodern uses of its narrative in Tremblay’s subtly signature style. These are largely on display with Tommy’s handwritten journal entries, which are at times riddled with scribbled-out (but just barely legible) passages that hint at larger, otherwise-unspoken admissions. These journal entries are a little reminiscent of the classic Dutch author Arthur Machen's famous horror tale “The White People,” as Tommy’s hyper-stream-of-consciousness voice comes across at once appropriately garrulous and disquietingly morbid, culminating at times into sentences that are simultaneously heartbreaking and horrifying.

In spite of all its unusual and multifaceted touches, make no mistake: Disappearance at Devil’s Rock is a true and powerful mystery novel, full of twists and horrors that will keep even the most jaded genre reader silently turning its pages late into the night.

One can only wonder just what kind of a tale Tremblay will tell next.