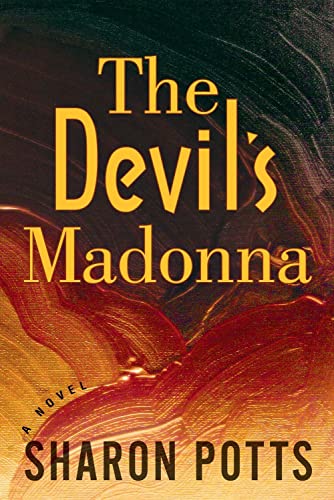 “Dark and compelling, The Devil’s Madonna is Sharon Potts’ best work to date.”

Pregnant with her first child and a recent convert to Judaism, freelance children’s illustrator and artist Kali Miller and husband Seth are dining at his parents’ home. Although Seth’s parents aren’t particularly overreligious, Kali knows it was important to them that their son marry a Jewish girl so their grandchildren would be Jewish under Judaic law.

During the meal, Kali gets a phone call from the local hospital. To her dismay, her beloved 93-year-old grandmother, Lillian Campbell, has almost burned down her house. Lillian inexplicably lit dozens of scared Yahrzeit memorial candles throughout the house.

Had it not been for an observant jogger passing the decaying Miami Beach house at the time of the blaze, Lillian in all probability would now be dead.

Later, Lillian has a stroke, so Kali must now put her life on hold to care for her grandmother,and moves into the old house, much to Seth’s annoyance.

While there, Kali probes her enigmatic grandmother for an explanation and information about her roots, and also about her mother’s death. But Lillian becomes increasingly paranoid. She believes someone from her past has found her and a painting she has hidden for over 70 years—a painting Lillian associates with her inadvertent role in one of the most horrendous episodes in history.

But only when Kali discovers her grandmother’s secrets in the old house’s hidden nooks does the truth finally emerge.

Plagued with nightmares, guilt, and terrifying memories of her life in 1930s Berlin, Lillian eventually reveals many cryptic details to Kali.

Pre-war Berlin, Lillian was something of a stage actress performing under the name of Leli Lenz. When the final curtain was finally brought down, she meets Dr. Altwulf, a teacher of art at the university. It is he who furthers her career by getting her parts in propaganda films for the Germans.

To add to her colorful—if somewhat morally dubious—life, Lillian loses herself in a collection of names and identities: marries American Harry Campbell, calls herself Astrid Troppe, Lillian Breitling, and Ilse Straus.

She eventually has a daughter named Dorothy, named after the Wizard of Oz character. Tragically, Dorothy is killed in a car accident, leaving a grandchild, Kali.

With the help of the boy next door who has now grown into a professor of history, Kali begins to disentangle the facts from the strange assortment of information her grandmother offers.

Will her life in 1930s Berlin, her loves, and her lies, as well as the true meaning of the small painting that she has hidden for more than 70 years be exposed to reveal the hideous secret that has haunted Lillian to this day? Or will the hunt to uncover her past lead to the imminent murder of Lillian and her pregnant granddaughter?

Perhaps murder is the only means to keep Kali and her unborn child from a future that no one in the world would ever want to face?

The Devil’s Madonna is a complex and atmospheric story filled with Poesque creepiness and Hitchcockian twists and turns. Author Potts has construed her novel on the solid ground of compelling storytelling, housing captivating characters and scenes.

Dark and compelling, The Devil’s Madonna is Sharon Potts’ best work to date.