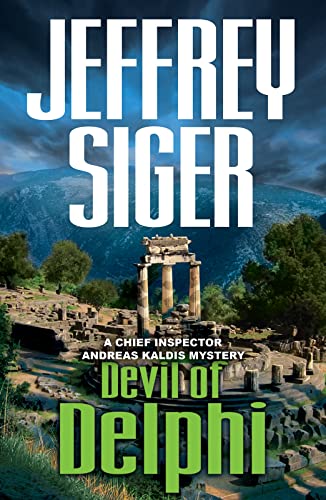 “Powerful and not to be missed.”

In this his seventh case, Chief Inspector Andreas Kaldis, head of Athens Special Crimes Division is up to his neck in the red stuff again, only this time it’s not blood but deadly bomba—poisonous and counterfeit wine—wreaking havoc on those who drink it, as well as local and international markets and the tourist industry, worth trillions of dollars. Technology has given the counterfeiters the edge on producing labels so authentic, only an expert eye is able to spot the difference, and even then with difficulty.

Alarmingly for Kaldis, it’s not just a couple of local bootleggers he has to deal with, but a highly organized and sophisticated cartel of distributors and brutal gangsters with little care for the people killed by their toxic brew.

In ancient times, mountainous Delphi stood at the centre of the world like a mythical sentinel, housing the gods. Kings and warriors often journeyed there to learn what their future held, as told by its Oracle.

In modern day Delphi, a young Athens émigré by the name of Kharon, seeks to re-build his life in obscurity among its pastoral, rolling hills and endless olive groves:

“He was born preciously one year after his mother’s death. At Least that’s what the birth certificate read. His father wasn’t around to notice the mistake, having vanished immediately after the fateful one-night stand. Nor did the orphanage pick up on the error; they simply treated him as the child of an unidentified itinerant mother, born on the day she died giving birth in one of Athens’ worst public clinics.”

Hitchhiking across the land, Kharon is picked up by foreign tourist Michael C. Dillman. While driving, the tourist constantly tells Kharon how much he loves this beautiful country, then tries to sexually seduce the young man. Alas, Dillman must never have studied ancient Greek mythology, otherwise he would have seen the young man’s name as a caveat: Kharon, the ferryman who transported the dead across the River Styx to Hades. Dillman is quickly dispensed with to his own Hades, his name now added to the bloody list of endless names.

Despite his wish to live in obscurity, the young man’s dark past and expertise soon becomes too well known, and his assassin skills are too much in demand for his fate to be left to his own hands. The dream of farming the land of olive groves, in all probability, will remain just that: a dream.

Enter a mysterious and ruthless businesswoman known only as Teacher—first introduced in Mykonos After Midnight. She isn’t happy, because the counterfeit wine is undermining her own business and future plans. As part of her plans to control the criminals operating the bogus wine market and teach a lesson to those daring to produce the counterfeit wine, she makes Kharon an offer he can’t refuse, whether he likes it or not. Finally, he reluctantly agrees, but only on his own terms and rules.

However, Kharon’s methods bring unexpected death to a member of one of Greece’s most prominent and feared political families, and draws Kaldis into the eye of a political and media firestorm threatening to bring down the nation s government.

Yes, this is a Chief Inspector Andreas Kaldis story, but he takes almost a backseat as we watch in fascination as Teacher and Kharon carve out their territories and plan their bloody future, knowing only one can be all-conquering . . .

Mister Siger is more than a master storyteller; he’s a historian and diarist for modern Greece. Devil of Delphi keeps you gripping the edge of your seat, right to the unexpected explosive ending, with more than a few twists and surprises—especially for our hero, Kaldis. Powerful and not to be missed.