The Devil and Webster 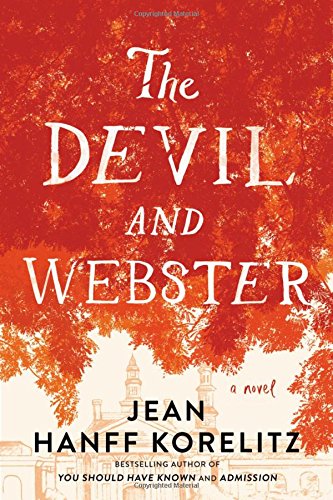 College campuses are in the news for various reasons these days, student rights and racism on the top of that list. The Devil and Webster offers a unique perspective inside some of these issues, and a very different perspective from which to view the discussions. Whereas most novels or nonfiction narratives about college campuses come from the viewpoint of students themselves, the opposite is the case in this novel. We see the events unfold from the POV of a very different person: the college president.

Naomi Roth was an activist in her youth, a knowledgeable and passionate human being who has worked in ROTC and Vista, who has always helped others, always worked wholeheartedly on issues concerning her community. So when she becomes president of Webster College—previously conservative but in recent decades extremely progressive and proud of its activist history—she finds it a perfect match. Now much older, with a daughter a sophomore at Webster, Naomi prides herself on an open door policy and a sentiment of love toward the many causes her students protest for and against regularly.

Then one protest goes out of hand, and she finds herself questioning everything, including her own role in activism. Today’s student activists are different animals than those in her generation. They don’t want an open door policy with the college president, they would rather go directly to the media and give interviews on cable news stations that may or not adhere to the truth. Such is the world we live in, and this particular cause at Webster is no different.

The story is not new, and has been written in similar contexts by other authors. The perspective is what makes this book so different from others. Readers see it all from Naomi’s perspective, more and more horrified as the events unfold— from picketing students to a violent, abhorrent act of vandalism in a dormitory, and finally to a smoke bomb thrown into Naomi’s office. Naomi finds herself the villain of the piece even though she has the best of intentions.

What’s perhaps most interesting is how Naomi sees herself and how others see her. For most of the novel, she wants to be a friend and advocate for the students. As such she’s puzzled as to why they don’t approach her, reach for the many olive branches she has offered to make them understand that Webster is proud of their activism, not angry at it. Then a friend explains it to her in a way that startles:

Naomi: “It’s kind of horrible, actually. My whole life has been organized around the principal of speaking truth to power, now I can’t speak.”

“I think so. The students are the ones trying to speak truth to you. That’s what they think, anyway. I can’t believe this is a surprise.”

But it was. It was more than a surprise. It was the kind of terrible shock you push back against with every bit of your strength, and then collapse beneath, because the pure, cold sense of it is so very heavy.

“I’m on their side,” she said, without any conviction whatsoever. “I’ve been open from the beginning. I’ve been available.”

“Irrelevant,” Francine said. “Their job is to place themselves in opposition to authority. You are the authority, whether you embrace it or not. That you opt not to resist them makes no difference at all. They’ve barely paid attention to you.”

Besides the obviously unique angle with it’s been written, there is more to like and enjoy in The Devil and Webster. Korelitz has an engaging writing style, informal with lots of parenthesis and asides. The history of Webster College blends with its present and its possible future, as Naomi organizes a Native American gathering to heal the wounds left by her ancient predecessors. Naomi’s personal history blends with the life of her daughter and even other students involved in the protest.

Most importantly, it is the campus itself that seems like a character in the book. From the title it seems appropriate, that if readers do not get caught up in the plot of the novel, they will sit back and analyze how Webster College rather than Naomi is the main character, and how the student protest (not the students making up the protest but the idea of the protest) becomes the living, breathing antagonist. Who will win this fight, and how will the fight be different this time as opposed to the countless previous and future protests on the famous stump on campus? That is the question Korelitz attempts to answer in this must-read book.