Detectives in the Shadows: A Hard-Boiled History 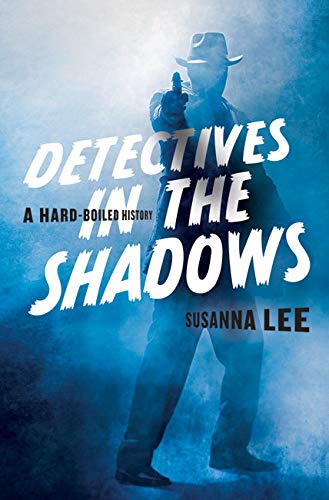 “the term ‘hard-boiled’ came to mean a type of character that readers can, on the one hand idealize, while on the other hand, they can rely on for certainty in an uncertain world. The hard-boiled detective is not ‘everyman.’ Rather, he is everyman’s savior.”

Merriam-Webster defines “hard-boiled” as: “(1) of an egg: boiled until both white and yolk have solidified (2) devoid of sentimentality: TOUGH.” There is a subset of the second definition that has come to be identified with a certain type of detective in film and literature as “a persona, an attitude, an entire way of being.” That’s what most readers think of when they hear the term, and thoughts flash through their minds of Sam Spade, Philip Marlowe, and Mike Hammer, the creations of Dashiell Hammett, Raymond Chandler, and Mickey Spillane, respectively.

But the hard-boiled detective didn’t start and end there. So says Susanna Lee in her fascinating new book Detectives in the Shadows: A Hard-Boiled History, which traces the origins of the hard-boiled detective and details its metamorphosis over the life of the 20th century and into the 21st, as well as its expansion to film and television, and even as it (gasp!) vaults the gender gap. In the process, the detectives, themselves, take on more nuance and shades of gray.

As Chandler wrote in an essay on Hammett called “The Simple Art of Murder”: “Down these mean streets a man must not go who is not himself mean, who is neither tarnished nor afraid . . . He must be the best man in his world and a good enough man for any world.” He is the hard-boiled detective.

In the term’s infancy, starting with Carroll John Daly’s Race Williams and Terry Mack, Lee tells us that it often connoted something negative; it “could mean cruel or even criminal, but it also and more often simply meant resilient and practical.” As the genre evolved, the label came to stand for something more, an “individual impermeability that weathers the storms. It is an attitude, a personality, and a moral attribute all in one.”

And so, the term “hard-boiled” came to mean a type of character that readers can, on the one hand idealize, while on the other hand, they can rely on for certainty in an uncertain world. The hard-boiled detective is not “everyman;” he is everyman’s savior.

Even as the hard-boiled detective adapted to changing times, so, too, did its medium of presentation. Fans who cut their teeth on characters in the pages of literature watched as, with the advent of new and better technology, those same characters came to inhabit the silver screen, in such films as The Big Sleep, with Humphrey Bogart as Chandler’s Philip Marlowe (script co-written by William Faulkner), and The Maltese Falcon, again with Bogart but this time as Sam Spade.

As the 20th century progressed, more nuanced (i.e., flawed) detectives came along. Like Mickey Spillane’s Mike Hammer in the Red Scare hysteria of the 1950s, who, though he was at times “called shabby, nasty, lurid, vicious, degenerative, and perverse,” nevertheless “saw that America was being threatened and understood that the nation wanted security.” And Hammer was just the man to provide it, as had Marlowe, Spade, Williams, and Mack before him.

Soon enough the Vietnam War and the civil rights movement created their own challenges to the genre, followed by the women’s movement, which “posed a particular challenge to the hard-boiled male. The idea of men as benevolent protectors of women, no matter how fictitious and how disadvantageous to women, was deeply rooted in American tradition.” But now it was no longer necessarily viewed as noble, but more (at least in some circles) as condescending. So the hard-boiled detective had to adapt yet again.

In the decades leading up to the turn of the century, still more new detectives came along in literature, like Robert Parker’s Spenser, first introduced in 1973 in The Godwulf Manuscript, but soon enough, detectives were being birthed on television, not in books. Even so, “[j]ust like the classic hard-boiled detectives of the 1930s and 1940s, television detectives navigated American identity and individualism.”

In the process, TV detectives sometimes added a new twist to the genre, something with which viewers could more easily identify. Detectives like James Garner as Jim Rockford on The Rockford Files and David Janssen as Harry Orwell in Harry O introduced an element of vulnerability to their characters. “Rockford had served time in prison for a crime he didn’t commit; he didn’t carry a gun, seemed nervous around weapons, and often got beat up. Harry Orwell, low-key and thoughtful, was retired and on disability from the San Diego Police Department.”

Somewhere, you just know that Hammett and Chandler were spinning in their graves. Yet both Rockford and Orwell brought a “solid sense of ethics to the small screen,” just as their forebears before them had to the pages of literature.

Lee tells us that there are different heroes for different times, including the long-delayed entry of female detectives into the hard-boiled genre, such as Jessica Jones, who first appeared in 2001 in the comic book (or is it graphic novel?) Alias, then made the transition to cable television in 2015. And in each era, as readers’ needs and insecurities morphed with the times, the creators of hard-boiled detectives inevitably rose to the challenge. Presumably, they will continue to do so in the future.

Detectives in the Shadows is a must-read for fans of detective fiction. As the author writes: “In real history, there is voluminous public need and a want of individuals prepared to respond to it. But in the hard-boiled world, someone is there.”

And that someone is the hard-boiled detective.