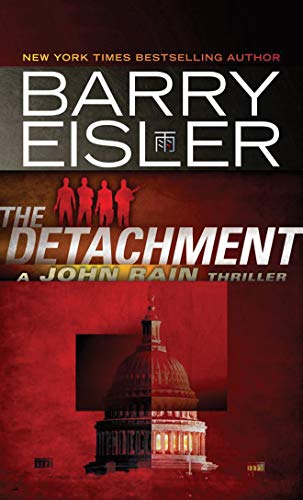 “The Detachment will give John Rain fans what they have been waiting for: a daring adventure in which their hero is not only fully engaged, but also as deadly and as calculating as ever—yet somehow more trusting, and more human.”

Pick up a Barry Eisler novel and chances are you’re going to get professional quality prose, solid storytelling, and strong characterization. This is certainly the case in Mr. Eisler’s new thriller, The Detachment, in which John Rain, his series character, returns to action.

In each of the seven Rain novels, one thing that is always impressive is Mr. Eisler’s ability to compose exciting, elaborately choreographed fight scenes. He takes the reader through each deadly move the characters make—blow by blow—but in so doing he does not laboriously slow the scene. As a veteran writer of several thriller novels, I can attest to the fact that this is extremely tough to do—and more difficult yet to do artfully. But Barry Eisler makes it seem effortless—the mark of a skilled writer.

Another trademark of a John Rain novel is Mr. Eisler’s capacity for getting into his character’s head as Rain analyzes and predicts his opponent’s moves, and then concocts his own countermoves. This is usually accompanied by an explanation as to why Rain’s decision to act as he’s chosen is strategically sound. Rather than slowing down the action, this technique brings the reader closer to Rain as if he’s a personal instructor watching a training film with her.

The Detachment is no exception to the above—Mr. Eisler takes the best of the Rain series and concocts a conspiracy theorist’s wet dream. Distrust and engineered governmental and corporate manipulation abound—and Mr. Eisler appears to be in his political element. The Detachment’s central premise is that a cabal inside the highest reaches of the U.S. government is in the process of launching a series of “false flag” terrorist attacks; false flag refers to the masking of the true perpetrator’s identity so he appears to be someone he is not. In this case, the U.S. government is the engineer of these attacks under the guise of Islamic terrorists.

Why would the feds do such a thing? The conspirators’ belief is that recurrent enemy assaults on the homeland would shake the nation’s psyche, enabling the schemers to declare martial law, suspend the Constitution, and snatch personal freedoms from the populace.

John Rain, the compassionate Japanese-American assassin featured in seven of Mr. Eisler’s nine novels, is coaxed out of self-imposed retirement to squelch this coup attempt. But there’s a catch. He and his sniper friend Dox must work with two other military-trained assassins (the subjects of Mr. Eisler’s two standalones), men who not only distrust one another, but Rain and Dox, as well. This detachment is almost like having too many cooks trying to make the proverbial stew: There may ultimately be dinner on the table, but the result may not be palatable. Yet the dynamics of the personalities of the team and Rain’s internal monologue are what drive The Detachment.

The Detachment will give John Rain fans what they have been waiting for: a daring adventure in which their hero is not only fully engaged, but also as deadly and as calculating as ever—yet somehow more trusting, and more human. It sounds antithetical, but Mr. Eisler manages to pull it off.