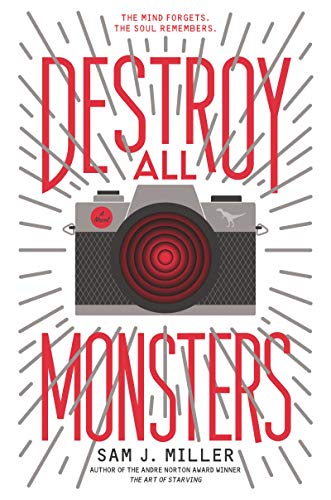 Destroy All Monsters is a spellbinding tale filled with equal parts fantasy and gritty reality, exploring the intimate nature of the “monsters” residing deep inside every human.

Solomon and Ash have always been best friends. But their friendship was forever changed five years ago when they were 12 and Ash (short for Ashley) fell from Solomon’s treehouse, hitting her head. Both children have blocked out the painful memory of what exactly caused Ash’s fall, with Ash moving on with her life and Solomon descending into the fantasy world of his imagination, drifting ever farther into what the adults surrounding him decide is a mental illness.

Told in alternating points of view, Destroy All Monsters picks up five years after the accident. Ash is prepping her art school admission photography portfolio, while Ash is homeless, truant, and seems lost in the fantasy world he’s created, Darkside.

In Darkside, Ash is a princess on the run, hiding her magical powers from the neo-fascist group that has declared war on Othersiders, those with magic. Solomon is an Othersider but has never discovered his magical power, so he makes a living as a freelance photographer, witnessing and recording the increasing acts of violence the anti-magic terrorists have wrought as they fight to topple Ash’s mother, the Queen, from power and destroy all magic—including their Othersider neighbors.

At the start of the story Ash is firmly entrenched in the reality of our world, aided by medication to help stave off her chronic anxiety and bouts of deep depression. As the high school and town are subjected to escalating acts of bigotry, touted as “harmless” teen pranks but ranging from anti-Semitism to arson to assault, she begins to see evidence of the football team’s guilt when she views them through the lens of her camera—evidence and guilt that no one other than Solomon believes.

What she sees through her camera threatens Ash’s hard-won mental stability and makes her doubt her photography, something she’s found solace in up until now. “Reality is messy. Reality is horrible. My camera allows me to make something out of that chaos. Something beautiful.”

One of the most enchanting aspects of the novel is the way each chapter crosses from Ash’s reality to Solomon’s fantasy, entwining the two worlds until they are intricately braided together. As Ash embraces her ability to see the truth via her photography, she also begins to believe Solomon’s crazy stories of Darkside, where she exists as a princess to the point where she begins to channel some of the princess’s magical powers—and the princess begins to use what she sees through Ash’s human eyes to find the courage to defeat the forces aligned against her and her royal family in Darkside.

“What if Solomon’s monsters weren’t in his head—hadn’t infected me as I followed him down the rabbit hole of his trauma? What if what I was seeing was just a different reality, no more or less valid than the one without monsters? Children know monsters are real. We forget, when we get older. When we decide we are grown-ups. We block out the monsters. Turn our backs on all that magic . . . Maybe it wasn’t trauma that made Solomon see the world as full of magic and monsters. Maybe it wasn’t his sickness. Maybe that’s just who he was. Special. Gifted.”

Solomon straddles both worlds, serving as the audience’s interpreter and guide through Darkside and becoming both Ash the girl’s and Ash the princess’s champion. He appears to be able to physically transport himself through time and space from one world to the other, miraculously appearing just when Ash needs him—or at least it feels that way from his point of view, where being able to save his friend also becomes his own chance at salvation.

As they fight against the forces of evil in both worlds, together they discover the truth about what really happened when he and Ash were young, and she fell. The fact that that secret is easily discerned by readers early on does nothing to detract from the novel’s compelling, ethereal narrative, which focuses on the power of friendship.

“We were both safe, so long as we stayed there. Stayed still. Every awful thing was asleep. The night protected us, a deep black star-studded security blanket . . . Anything could happen once he stepped down off my porch. Returned to the real world with all its terrors and uncertainties. But in that moment, we had each other.”

Destroy All Monsters is heart-felt and magical, yet also a candid portrayal of mental illness, bigotry, and the impact of childhood trauma on friends, family, as well as society as a whole. Ash and Solomon and the world they created will linger on in the memories of readers long after the final page.